Top three things to watch in the Houston Democratic Debate 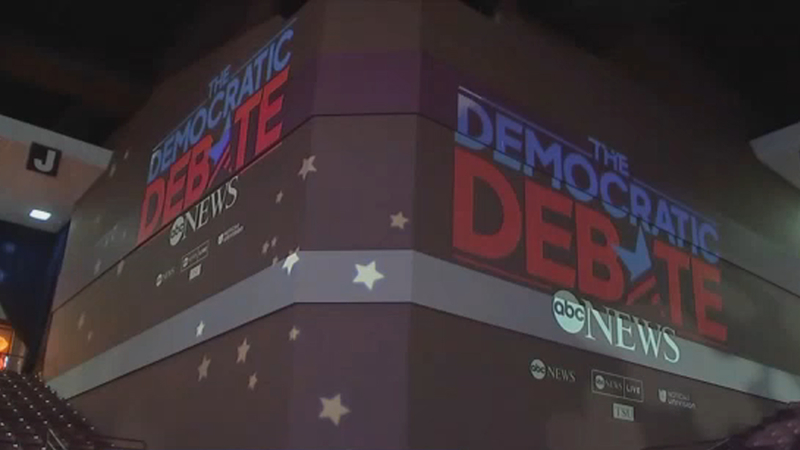 3 things to watch for in tonight's debate

HOUSTON, Texas (KTRK) -- The top democratic candidates for the 2020 Democratic presidential race will take the stage in Houston Thursday night. Here are the top three things to watch for.

With the recent mass shootings in Odessa and El Paso, gun reform is at top-of-mind for many Texans and people throughout the country.

Former U.S. Rep. Beto O'Rourke has made headline-making announcements asking banks and credit card agencies to stop allowing transactions for gun sales without background checks, a practice that sometimes happens at guns shows.
He's also asking financial institutions not to do business with gun and ammunition makers that sell AK-47 and AR-15 type weapons. This will likely lead to conversations on gun reform policies among the ten candidates.

RELATED: How to watch the Houston Democratic Debate

2. How can candidates stand out?

The appeal to banks could be one way O'Rourke stands out, if he purses that topic on the debate stage.

A few key lines at a debate can create momentum for the candidates. Sen. Kamala Harris made headlines for taking on Joe Biden in a debate and gained polling points afterward. That's since leveled out a bit, but is a prime example how debate strategy can shift a campaign.

Entrepreneur Andrew Yang is expected to highlight his policies, which stand out among the candidates, such as his plan to give each American $1,000 per month. And taking on the front-runners, especially Biden, is a proven method for making post-debate headlines.

Look for the lower-polling candidates to swing up.
3. One Night, One Stage

Unlike the previous debates, the candidates will all be on one stage for the same night.

Senator Elizabeth Warren and Joe Biden are both doing well in terms of polling and donors, but they haven't faced off in a debate until now.

Biden is seen as a candidate who can revert things back to the Obama years, whereas Warren is seen as more of a reformer, focusing on income inequality.

RELATED: Here's what will happen at the 3rd democratic debate