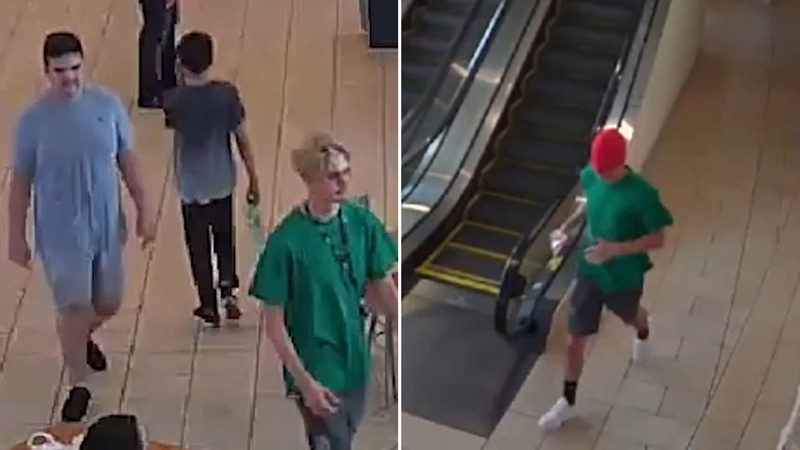 At the beginning of the video, the first man is seen walking around in a green T-shirt. A second man in a gray T-shirt is walking next to him.

The next clip shows the man in the green top again, but this time, he's wearing a red mask over his face. He runs past the escalators, which are close to the Cinemark Theater inside the mall and the food court.

Police are asking witnesses and anyone with information about the identities of both people to contact Crime Stoppers at 713-222-TIPS.

The incident set off a panic, leaving dozens of people stampeding toward the doors.

Two people were injured when hundreds of customers started running, attempting to flee a possible shooter near the food court.

Heidi Troche was shopping for shoes at Macy's with her 12-year-old daughter when the scare happened. They saw people running and heard them shouting, "Shooter."

"We made it all the way to the shoes, and the next thing, it was like a wave of screams. And it wasn't just two or three. It was everyone running," she recalled.

Troche said even though it was a false alarm, they spent 20 minutes thinking they were in the middle of a mass shooting.

"I grabbed my daughter as hard as I could and I started zigzagging to the exits. It really felt like we were dodging bullets. We weren't really dodging bullets, but when someone says 'shooter,' run. You feel like you're dodging danger," Troche said.

According to the mom, she tore her calf muscle while trying to get away. She believes the suspect should be prosecuted.

HPD Chief Art Acevedo said the suspect could be charged with a felony for making a terroristic threat.

HPD asks any witnesses at the mall Sunday, and anyone who knows the suspect in the video, to come forward.