WABC
By Eyewitness News
NEW YORK -- All the defendants on trial in the brutal murder of an innocent Bronx teenager, 15-year-old Lesandro "Junior" Guzman-Feliz, have been found guilty of murder.

After just one day of deliberations, the jury found all five defendants guilty Friday afternoon on all counts, including first-degree murder, second-degree murder and gang assault.

Antonio Rodriguez Hernandez Santiago, Jonaiki Martinez Estrella, Jose Muniz and Manuel Rivera and Elvin Garcia were the first five to stand trial out of the 14 arrested and charged in the stabbing Guzman-Feliz. 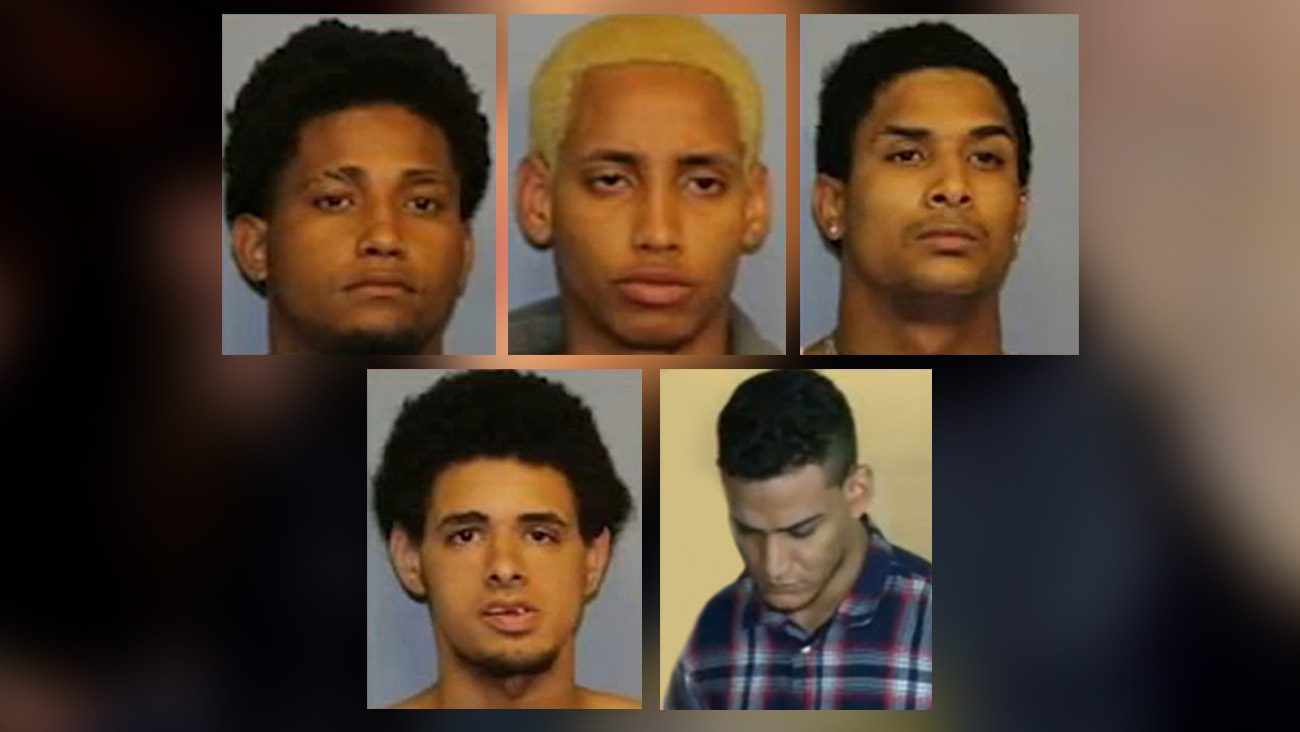 Four of the convicted gang members showed no emotion at the verdict or when they were led out of the courtroom. But Rivera shook his head and shouted out in Spanish something to the effect of "Trinitarios until the day I die."

All of the defendants face life in prison. Sentencing is set for July 16.

Junior's brother said he is happy with the verdict, and now his family wants the suspects to be sentenced to life without parole.

"I'm grateful of the good job the jury did today -- it was a just decision," Junior's father Lisandro Guzman said. "My son is not coming back, but at least those thugs are not going to be on the street."

Junior's mother Leandra Feliz thanked everyone for their support.

"I'm not going to have my son back -- but those killers are not going to be outside killing another kid," she said. "We have to stop the violence and have a safe city."

Lesandro "Junior" Guzman-Feliz was alone when police say he was mistakenly targeted as a rival gang member by a group of 14 men all believed to be members of a faction of the Trinitarios gang.

He tried to escape them by running into a bodega. Caught on video, he was dragged out by the men and brutally stabbed. He later died after being cut with a machete.

The trial started last month and centered around one of the five suspects who flipped, testifying against the others. Prosecutors had to prove that the defendants intended to torture and kill Junior in order for the jury to find them guilty of the two counts of murder.

It was an extremely emotional trial, so much so that Junior's mother had several outbursts and agreed to watch the trial in another room.

"(I hope) that the divine and earthly justice be served, with God. Justice for Junior," she told reporters in Spanish.

After the verdict was reached, Bronx Borough President Ruben Diaz Jr. released a statement on the murder that rocked a community:

"Nearly one year ago our borough felt the unbearable pain of horrible loss. A young man, Lesandro 'Junior' Guzman-Feliz, was senselessly murdered in an act of heinous, reprehensible gang violence. Junior was everything we want our children to aspire to, and he was needlessly struck down. The pain of this act was made even worse due to the graphic public nature of the crimes, which played out on video for everyone to see. The entire world shared the sorrow of The Bronx.

"Today Junior's family, and in fact our entire city, has received a measure of justice. I thank District Attorney Darcel D. Clark for her and her office's diligent prosecution of this case.

"Throughout this ordeal I have been inspired by Junior's parents, Leandra Feliz and Lisandro Guzman, and how they have dealt with unimaginable tragedy. Ms. Feliz has been a model of strength and grace in the face of devastating loss. Today's verdicts will not bring Junior back. Nothing can. But these verdicts will send a message to those who would commit acts of senseless violence, and help us move forward and bring closure to this awful chapter in our borough's history."

"Junior came to symbolize all of the young people who have lost their lives to brutal gang violence," Clark said. "Today's verdict fortifies the Bronx community's stand against violence."

The trial of nine other suspects accused in Junior's murder is scheduled for September.