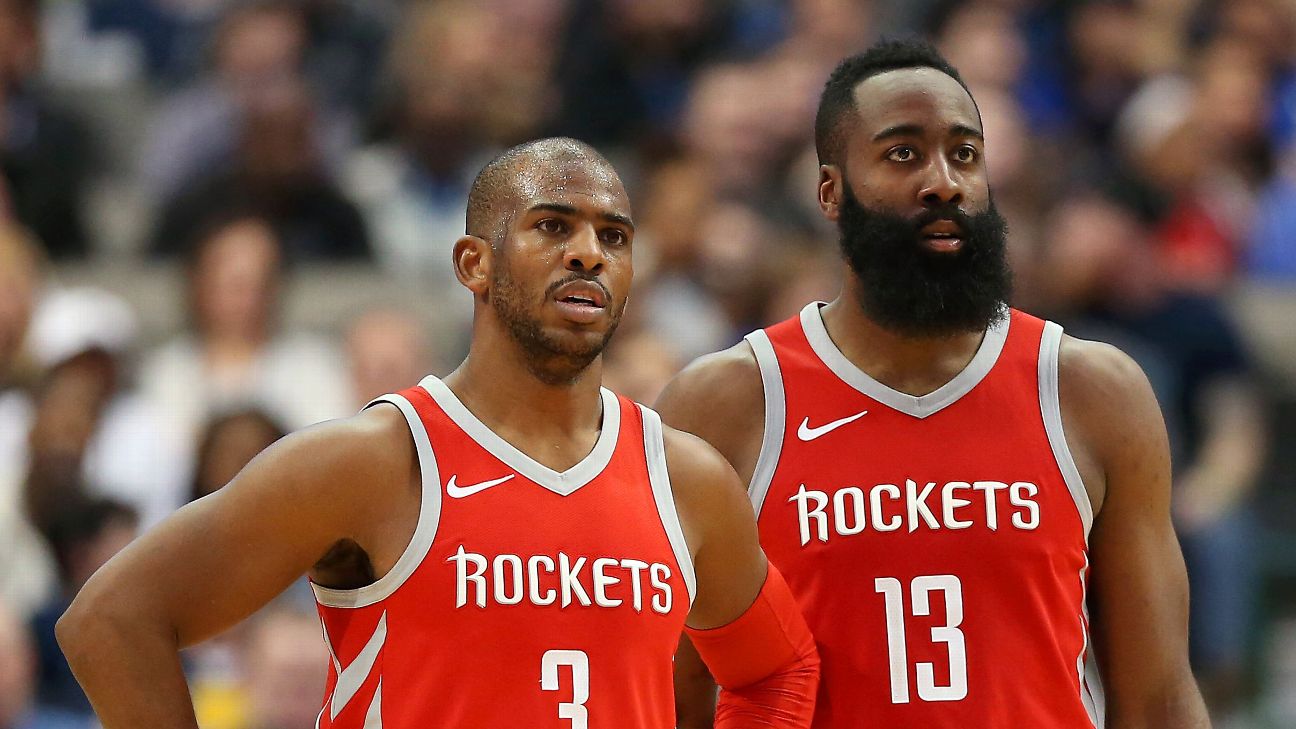 MINNEAPOLIS -- Coach Mike D'Antoni's concern about the possibility of theHouston Rockets losing their rhythm after clinching the NBA's top overall seed with a couple of weeks remaining in the regular season has become a reality.

The Rockets cruised to the league's best overall record with a historically elite offense, but Houston hasn't been nearly as efficient since clinching home-court advantage throughout the playoffs in late March.

"I'd say [the past] couple months we haven't played really well," D'Antoni said before Sunday's practice, a day after a 121-105 loss to the Minnesota Timberwolves that trimmed the Rockets' series lead to 2-1. "That's why I was worried the whole time about resting guys, doing this, getting out of rhythm. [People say], 'It doesn't really mean a whole lot.' Ehhhh, it does.

The Rockets scored 112.2 points per 100 possessions during the regular season, an offensive efficiency that was a 10th of a point behind the Golden State Warriors for the best in the league. That number plummeted to 102.3 points per 100 possessions in the seven regular-season games after Houston clinched the top overall seed, a statistic skewed by occasionally resting key players down the stretch.

D'Antoni expressed his concern about losing rhythm by resting regulars after the Rockets' 11-game winning streak ended with a blowout loss to the San Antonio Spurs on Easter Sunday. But Houston erred on the side of caution with players nursing minor injuries and rested the entire rotation for the regular-season finale -- a loss to the Sacramento Kings on the second night of a back-to-back.

Houston hasn't been able to flip the switch during the playoffs. The Rockets are averaging 106 points per 100 possessions during the first-round series, a mediocre number.

Harden and co-star Chris Paul both emphasized that the primary reason for the Rockets' Game 3 loss was an uncharacteristically poor defensive performance.

The Rockets had not allowed that many points since a 124-114 loss to the Golden State Warriors on Jan. 4. The Timberwolves shot 50 percent from the floor in Game 3, including 15-of-27 from 3-point range, with Paul describing many of Minnesota's long-range shots as being "butt-naked" open.

"I guess everything is cool until you lose," Paul said. "All in all, we've just got to come out tomorrow ready to play and be us. ... It starts on the defensive end. That's when we can get out in transition."

Harden shifted the focus to defense when asked how the Rockets can regain their offensive rhythm in the middle of a playoff series.

The Rockets went 44-5 when Harden and Paul both played during the regular season. However, the future Hall of Fame playmakers have yet to both perform well in the same playoff game.

Harden carried the Rockets in Game 1 with a 44-point, eight-assist performance while Paul had an off game, scoring 14 points on 5-of-14 shooting and matching his career playoff high with six turnovers. Harden had a horrible shooting performance in Game 2 (2-of-18 from the floor), but Paul starred with 27 points and eight assists. Harden had 29 points and seven assists in Game 3, when Paul fouled out after only 30 minutes, finishing with 17 points and six assists.

"We've kind of like traded off, right?" Harden said. "We've just got to get a rhythm. It's not necessarily just me and Chris. We're good enough to get enough to get our shot going and get our rhythm going at any point in any game.

"We've just got to make sure we're rallying everybody else around us and making sure that they're in good spirits and always confident in their shot. ... So we're good. We're real good."

Harden: Playing hard the answer to breaking rut
James Harden responds to coach Mike D'Antoni being concerned about the Rockets losing their rhythm after clinching the No. 1 overall seed.