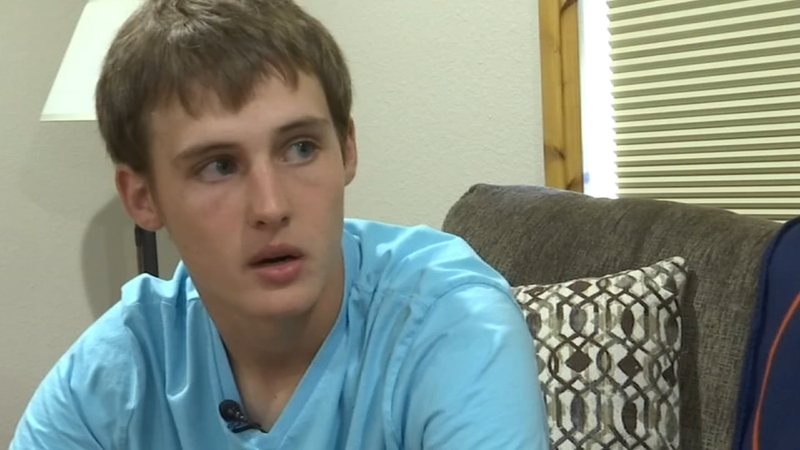 BEASLEY, Texas (KTRK) -- A 19-year-old is recovering after surviving an accident involving a gas pipeline in Fort Bend County.

On Aug. 16, Jacob Kowalik says a gas pipeline exploded right next to him while he was working for the Fort Bend County Drainage District.

"It was just a normal day," Kowalik said.

He told ABC13 that he was in a slow mowing tractor when his coworker, who was about 20 yards ahead of him in a 15-foot shredder, unknowingly hit a gas pipeline and it exploded.

"There was no signage telling me there was a pipeline there," Kowalik said.

Initially, Kowalik said he did not know what was happening. He said he thought his mower was having some kind of equipment issues.

"I got off my tractor and the gasses pushed me to the ground and threw me like a rag doll," Kowalik said. "I was thrown probably 10 yards in the bottom of the creek bed behind my tractor."

The pressure from the pipe was tremendous, and the force sent rocks and other debris shooting into the teen's back. A picture of his injuries shows several red bumps.

The force was so strong the teen told ABC13 that he lost his shoes, phone and hat.

The Texas Railroad Commission sets the safety guideline for pipelines in Texas and confirmed to ABC13 that the department is looking into the incident:

"Protection of public safety is the Railroad Commission's highest priority. The Commission has an ongoing investigation into this Aug. 16 incident to determine compliance with RRC's Pipeline Safety and Underground Pipeline Damage Prevention rules."

The Southcross 14" line that was struck on Friday, August 16th was returned to service this morning at 10 AM following the completion of repairs to the line.

Two employees from Fort Bend County Mower were involved in the pipeline incident. Per the Fort Bend County Supervisor, it is our understanding that the employees were released from the hospital on Friday, August 16th following a thorough examination.

The pipeline was struck by tractor/mowing equipment, causing a sudden release of pressure from the pipeline that was accompanied by a loud noise. There was no fire or explosion associated with the incident.

Southcross operating personnel responded to the sudden pressure release from the pipeline by shutting in the line on either side of the release. Southcross personnel followed appropriate emergency procedures with employees and contractors evacuated to a safe location following the incident. In addition, appropriate local authorities and emergency responders were immediately notified following the incident.

Kowalik managed to get to his feet and get to safety after being thrown to the ground.

"The disheartening thing about it is I know it could've been prevented in multiple ways and it wasn't," Kowalik said.

For more information about pipeline rules and safety, visit www.call811.com or visit the Railroad Commission of Texas website.