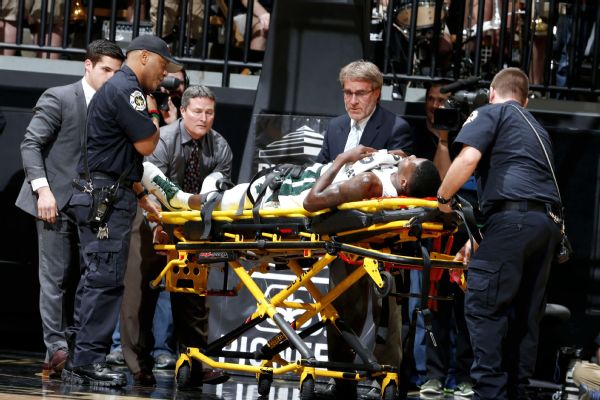 Michigan Statesenior guardEron Harris will have season-ending surgery on his right knee, the school announced on Sunday.

Harris was injured during the Spartans' game against Purdue after he drove the baseline for a layup. He landed awkwardly and eventually was taken from the court on a stretcher. Harris returned with his team to East Lansing, but an MRI revealed that the senior would need surgery. The school did not disclose exactly what the injury was, other than to classify it as "significant.''

"We all feel absolutely awful for Eron," Tom Izzo said in a statement released by the school. "As I said last night, I couldn't ask for more than what Eron has given me and this program. Over the last month he's grown even more as a leader and been an example to his young teammates. And maybe I didn't even fully grasp it until I walked on the court and saw the admiration his teammates had for him and the tears in their eyes. There's no faking the respect they have for Eron as a man, as a player, and most importantly a teammate.

"It's cruel to see a senior's career end this way. If there is a silver lining, it's that we expect Eron to be able to make a full recovery and pursue a basketball career after graduation. He's always worked for everything he's accomplished on the court, and that same passion and mindset will serve him well in his recovery. Basketball is important to all players, but for Eron it was a way of life. Very few have spent more time in this facility or worked harder than Eron has. That's why I'm confident his best basketball is still in front of him."

Harris, who transferred after two seasons at West Virginia, was averaging 10.7 points per game and led the team in 3-point shooting with 43 makes from beyond the arc.

His injury leaves an already depleted Michigan State roster in even more disarray. The Spartans have been without forwards Gavin Schilling and Ben Carter, both done in by knee injuries, since the start of the season.