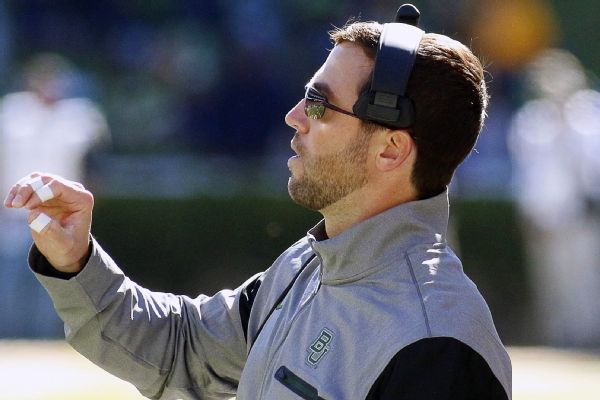 Briles will join new FAU coach Lane Kiffin after coaching Baylor against Boise State on Tuesday in the Motel 6 Cactus Bowl. ESPN's Kirk Herbstreit first reported the hire, noting that Briles will have full control of the offense and the playcalling duties as Kiffin focuses more on overseeing the entire program. Kiffin told Fox Sports' Bruce Feldman that the Briles hire is a "home run."

An NCAA infractions committee panel on Wednesday confirmed that Briles and another Baylor assistant, wide receiver coach Tate Wallis, had committed recruiting infractions by exceeding the number of allowed evaluations with two prospects and having impermissible contact with a prospect. The panel upheld Baylor's self-imposed penalties on Briles and added only a $5,000 fine, ensuring he could seek employment without any recruiting or coaching restrictions.

FAU checked with the NCAA and Baylor and found no issues, a source told ESPN's Brett McMurphy.

In fact, Baylor officials told FAU it had "no information that would disqualify Briles from [continuing to work] at Baylor," a source told McMurphy.

Briles, the son of former Baylor coach Art Briles, spent the past nine seasons at Baylor, including the past two as offensive coordinator. He remained on staff after his father's dismissal in the spring of 2016. In 2015, he was a finalist for the Broyles Award, given to the nation's top assistant coach.

Briles had received interest from several other programs, including Notre Dame, Houston, Auburn, Cincinnati and Oregon, before landing with Kiffin at Florida Atlantic.