Uber gives riders a preview of the driverless future 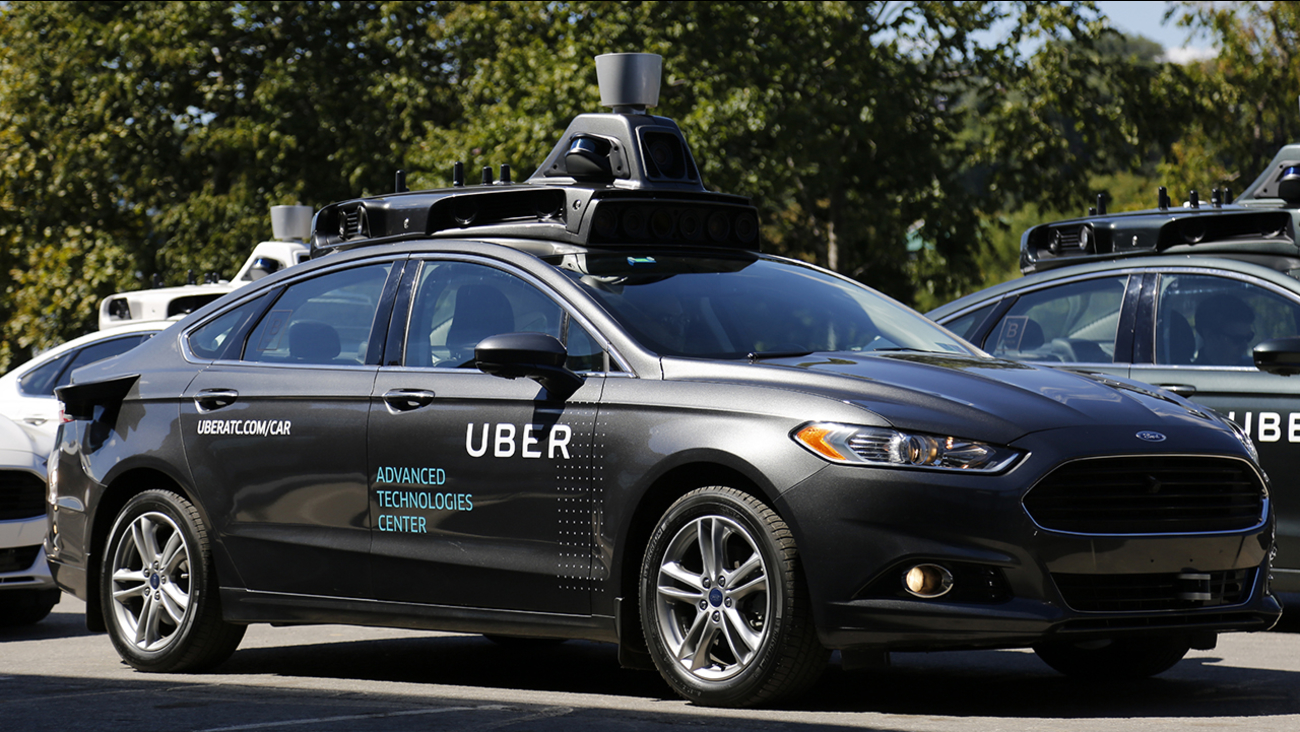 A group of self driving Uber vehicles position themselves to take journalists on rides during a media preview at Uber's Advanced Technologies Center in Pittsburgh (AP Photo/Gene J. Puskar)

PITTSBURGH, PA -- Uber riders in Pittsburgh can get a glimpse of the future by summoning a car capable of handling most of the tasks of driving on its own.

Starting Wednesday morning, a fleet of self-driving Ford Fusions will pick up Uber riders who opted to participate in a test program. While the vehicles are loaded with features that allow them to navigate on their own, an Uber engineer will sit in the driver's seat and seize control if things go awry.

Uber's test program is the latest move in an increasingly heated race between tech companies in Silicon Valley and traditional automakers to perfect fully driverless cars for regular people. Competitors such as Volvo and Google have invested hundreds of millions of dollars and logged millions of miles test driving autonomous vehicles, but Uber is the first company in the U.S. to make self-driving cars available to the general public.

"That pilot really pushes the ball forward for us," said Raffi Krikorian, Director of Uber Advanced Technologies Center (ATC) in Pittsburgh, the company's main facility for testing self-driving vehicles. "We think it can help with congestion, we think it can make transportation cheaper and more accessible for the vast majority of people."

Removing the cost of the driver is one way to make rides more affordable. But that prospect didn't sit well with some Uber customers.

"It scares me not to have a driver there with an Uber," said Claudia Tyler, a health executive standing near the entrance of an office in downtown Pittsburgh.

A reporter from The Associated Press tried out the service Monday. The ride through downtown Pittsburgh and over some bridges went smoothly, with the car waiting for oncoming traffic before making a turn and at one point stopping for a vehicle that was backing into a parking space. Parking, however, was a task the human driver had to perform.

Approaches to driverless technology differ. Google, a unit of Alphabet, and Ford Motor Co. want to perfect the fully driverless car - no steering wheel, no pedals - before letting the public climb in for a ride. Others are adding autonomous features in phases, while relying on the driver to take over in certain circumstances.

Many experts predict that it will be years, if not decades, before the public is being driven around in fleets of fully driverless vehicles under any condition.

"Because vehicles are driving at seventy miles per hour on the highway, if something goes wrong, things could go wrong very bad, very quickly," said Carnegie Mellon engineering Professor Raj Rajkumar. "This technology needs to be ultra-reliable before we can take the human out of the driving equation."

NuTonomy, a spinoff from the Massachusetts Institute of Technology, got the jump on Uber globally three weeks ago when it began picking up passengers in self-driving taxis in Singapore. The company said Tuesday that its six taxis - with backup drivers - haven't had any accidents since the service launched.

The Uber vehicles are equipped with everything from seven traffic-light detecting cameras to a radar system that detects different weather conditions to 20 spinning lasers that generates a continuous, 360 degree 3-D map of the surrounding environment.

During the demonstration for reporters two engineers were seated in front - one ready to take control in case the car encountered a situation it couldn't handle, the other monitoring the car's 3D map and scribbling notes on how to improve the car's software. The engineers must undergo a week of safety orientation or more to drive the cars, with additional training as the vehicles continue to be refined.

Pittsburgh is a particularly good place to experiment, they said, because the city is a research hub of self-driving cars and has notoriously bad driving conditions, including snowstorms, rolling hills and a tangled network of aging roads and bridges. Uber executives are watching to see how the cars handle these challenges before saying when fully driverless vehicles will be ready to hit the roads.

"We actually think of Pittsburgh as the double black diamond of driving," Krikorian said. "If we can really tackle Pittsburgh, that we have a better chance of tackling most other cities around the world."

Pennsylvania also lacks stringent testing regulations at the moment, unlike other driverless car-testing venues such as California. The Uber trial is perfectly legal under current state law, Pennsylvania officials said.

A task force commissioned by the state is expected to make policy recommendations in November.

Uber officials hope the initial trial will teach them how to ease public fears of adopting the bleeding-edge technology.

"The Pittsburgh pilot is our opportunity for real world testing, so that we can learn more about what makes riders feel safe and comfortable," said Uber product manager Emily Bartel.

Uber's Silicon Valley roots means it tends to pivot quickly and plan, experiment, and adjust direction within weeks, in contrast to longtime carmakers like General Motors or Toyota who have yearlong timelines when bringing out new features, Rajkumar and Uber officials said. When the drivers are removed from front seats, the cars will likely be restricted to driving in specific locations under good conditions at first.

"I'd probably give them a little bit and let them work their kinks out," Patrick Holland, a Philadelphia-area student, said right before getting into a human-driven Uber. "But I think a product that's well tested and it's proven to work and safe - I think that's where we're heading, and I think I'll eventually find myself in a driverless vehicle."
Related topics:
automotivepennsylvaniacaru.s. & worlduber
Copyright © 2021 by The Associated Press. All Rights Reserved.
More Videos
From CNN Newsource affiliates
TOP STORIES