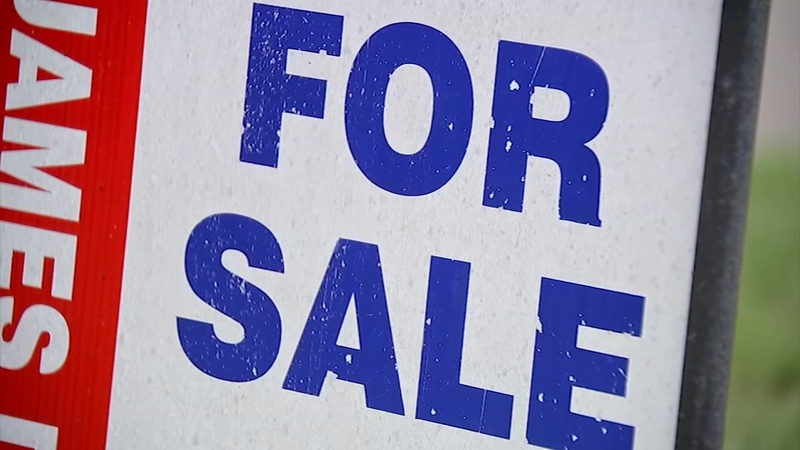 HOUSTON, Texas (KTRK) -- As Ruby Samuels stands in the front yard of her Houston home, she's quick to point out it's not actually hers.

She doesn't own it, and despite living in the U.S. for 21 years, she's faced one challenge after another as she works toward homeownership.

Samuels didn't realize what a credit score was the first time she tried to buy a home. It's something lenders consider when weighing whether or not to approve a home loan, but was not a concept she was familiar with in her home country of Dominica.

Samuels said once she brought her credit score up, she learned she needed cash for a down payment and started saving even more.

Now, after getting approved for down payment assistance from the Houston Area Urban League, she can't find a lender to give her a home loan.

"I'm not alone," Samuels said as she sat in the living room of the home she's been renting for years. "I think there are many people in that same situation, but why do they only want us to rent? I don't know."

A 13 Investigates analysis in partnership with ABC Owned Stations found minorities have a harder time moving from renters to homeowners across the U.S. and in Harris County, they get denied home loans two and a half times more than white applicants, even if all other factors are the same.

"The ranks of homeowners are disproportionately white," said Dr. Steve Sherman, a research fellow at the Rice University Kinder Institute for Urban Research. "We pride ourselves, and for good reason, as being a place, as being a city, as being a region where people can move forward and build wealth and the alarming fact is that that doesn't appear to be happening in the housing sector in Harris County and in Houston."

Glenda Kizzee, housing services manager at the Houston Area Urban League, said it's harder for working class minority families to own homes due to lack of education, access and other financial barriers, such as income and savings to pay for a down payment and closing costs.

"They think it's for somebody else. It's not for them," Kizzee said. "The best they could do is maintain their rental and pay it on time and stay in the same place, create their community where they are, but that added advantage of building forward for the future is not something that they think is a possibility."

Samuels thought within three or four years of moving to the U.S. she would have owned a home. Instead, over the last 21 years, she's watched her nieces and cousins in her home country buy their own large properties, wondering why it's been so hard for her to do the same.

"I thought I would just go to the bank and just sign paperwork and that's it. Get a loan I can pay ... but it has not been that way," she said. "It's depressing because sometimes I would just love to wake up and be in something of my own."

Samuels has rented five or six different homes over the last 21 years. Whenever she pays her $1,300 monthly rent, she is reminded that she could have paid off a house by now.

"I'm a responsible person, responsible for my finances. I don't live above my means. I just do everything where I can afford," she said. "If you can pay the rent, why not pay a mortgage? I can afford a home."

A recent study by the Rice Kinder Institute for Urban Research found that although homeownership became more affordable for some due to the lower interest rates during the pandemic, it became harder for renters to become homeowners in 2019 because the gap between the median sales price and the median renter household income grew.

"In 2019, the median sales price in the county was $229,900; however, a renter earning the county's median renter household income could only afford to buy a home costing $135,603, assuming they spend 30% of their income on housing," according to the Institute's annual State of Housing in Harris County and Houston report released this summer. "With housing prices increasing after COVID-19, it will likely become even harder for renters to enter homeownership."

Sherman said the median income for renters is also lower than the median income of homeowners, meaning renters generally pay a larger share of their monthly income towards housing, making it harder for them to invest in owning a home in the future.

"Ultimately the goal is to have stable housing," Sherman said. "What you get out of home ownership is asset and asset is a very common entrée into wealth building and intergenerational wealth building."

He said there's no denying a clear racial wealth gap when it comes to housing and even when minorities are able to purchase homes, they end up with higher interest rates that make them more at risk of foreclosure. They also don't receive the same benefits of an increase in their property value.

"Homeownership is the major wealth generation vehicle for people in the United States. We find that for instance, Black home purchasers are buying less expensive homes and Hispanic, Latino home purchasers, too, are buying less expensive homes in regions and parts of the county that are less likely to accrue in value, further flung areas, farther from amenities," he said.

Part of the problem, Kizzee said, is there's not enough affordable housing in Houston for working class renters to become homeowners.

"We need more. The average house (is) $200,000 probably, even in what would be considered a minority community," she said. "Anybody can get you in a house, but you want to be able to afford it monthly and to keep it and maintain it."

Sherman said the high interest rates among minorities is indicative that buying a home is a risky way to try and close the racial wealth gap.

In addition to the social justice reasons for wanting to close the gap, Sherman said current homeowners should also care because it impacts everyone.

'It changes their family direction'

As she works to help renters become homeowners, Kizzee said she's met families who have generationally been renting a home for 15, 20 or even 30 years.

These are people who know how to manage their money and pay their rent on time, she said. But when it comes to actually purchasing a home, from the realtor to loan officer and inspector, understanding the complexities of the process can be foreign to them.

"If they've never had anyone in their family to purchase, they don't have a ready source to get advice," said Kizzee, adding that HAUL aims to be that resource for them. "Homeownership is big business. People make lots of money from it and so there are not so good community people sometimes who take advantage of a person not knowing how to navigate."

Kizzee said half of the battle is just changing the mindset of minority residents to believe that owning a home could one day be a possibility for them.

"They are our working families, primarily minority families. We have a large population of immigrant families that perhaps in their home country, homeownership is not even an option so it's extremely difficult to conceive that I can do it here," she said.

Samuels said one of her friends has been renting the same home for 13 years. Whenever she asks them if they want to own a home, she said they told her they tried and gave up.

Samuels, who has been working with a HAUL counselor, said she's done everything she can, including securing down payment assistance and raising her credit score. Now she feels like she's "just waiting in limbo."

Kizzee said the average HAUL housing client is with them anywhere from 12 to 18 months, and though that may sound like a long time, she said those clients will be great homeowners because they've had time to prepare and understand the process and challenge ahead.

She said owning a home is one of the biggest aspects of building generational wealth that can be passed on to siblings, children or other people in their family unit to build toward a better future. The best days for her are when she can help families achieve that goal.

"Is the most significant step because it changes them. It changes their family direction. They can start thinking of other possibilities. Maybe I want to start a small business now. I can start planning to send my kid to go to college," Kizzee said. "The idea that I'm going to be building equity and I can stay here and age in my home and in my community and around what I'm familiar with. It's mind changing. It will move them from one economic sphere to another."

Sherman said the Institute will continue studying housing equity in Houston and Harris County every year. He said the shortcomings are not something that can be fixed by local government alone. Instead, he said local policymakers need to identify allies that can help enact policy change at the state and federal level that will allow for more equitable housing opportunities for minorities.

"We want this to be a place where people can flourish and I think Houston has a reputation for being that place and so it's a point of particular concern when the prophecy isn't getting fulfilled," he said.

From a buyer perspective, Samuels recommends home loan lenders look at each applicant as a whole, considering not just their paper application - with their credit score, credit history and income - but also the barriers they have had to overcome, their drive and desire to make sure they not only purchase a home, but can keep it.

After 21 years in the U.S., Samuels said there are times she feels like giving up on the dream of owning her own home. She downplays her desire and the possibility of ever owning one and instead reminds herself how thankful she is just to have stable housing.

Still, she can't stop thinking of what it'll feel like the day she finally walks into a house and can call it her own.

"Next time I move, I'm going to my house. I made up my mind," Samuels said. "In five years, I will not be renting anywhere else. I have to buy that house."