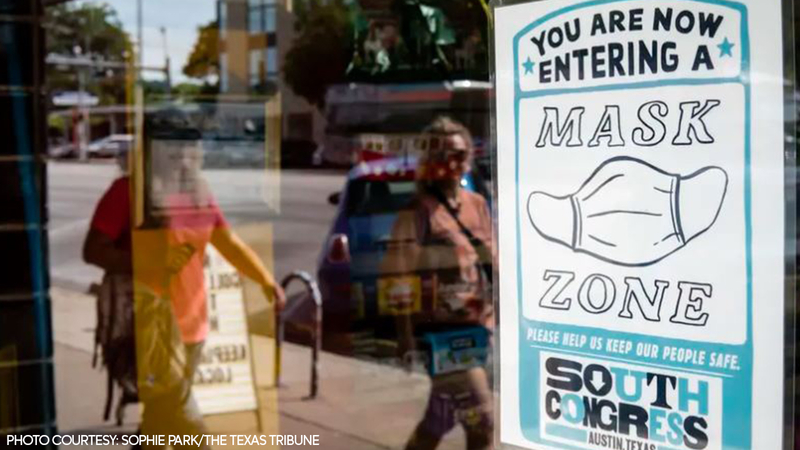 Texas showdown on mask mandates: Where do we stand?

HOUSTON, Texas -- The Texas Supreme Court on Thursday temporarily blocked a mask mandate issued by San Antonio and Bexar County for their public schools - a blow to efforts by some cities, counties and school districts to defy Republican Gov. Greg Abbott's ban on such measures.

The ruling came in a lawsuit by San Antonio and Bexar County, one of at least nine that have been filed by cities, counties and school districts against Abbott over his ban on mask mandates. Amid a surge in COVID-19 cases that have overwhelmed many hospitals across the state, at least 10 counties and cities and 63 school districts or systems in Texas have imposed mask mandates to slow the spread of COVID-19.

Abbott has argued that a law known as the Texas Disaster Act gives him broad power in deciding how best to respond to emergency situations, including whether to ban mask mandates during a pandemic. In an emergency order issued last month, Abbott reaffirmed his ban on mask mandates by any state, county or local government entity.

The counties, cities and school districts say Abbott has exceeded his authority. Dallas and Harris counties, two of the state's most populous counties, are among those that have imposed mask mandates.

In its order Thursday, the court said oversight of decisions on mask mandates has been up to the governor and "that status quo" should remain in place while the courts examine the issue.

"This case, and others like it, are not about whether people should wear masks or whether the government should make them do it. Rather, these cases ask courts to determine which government officials have the legal authority to decide what the government's position on such questions will be," the court said.

The court has not yet made a final determination on the legal issues surrounding mask mandates.

"The Texas Supreme Court has sided with the law, and the decision to enforce mask mandates lies with the governor's legislatively-granted authority. Mask mandates across our state are illegal," Texas Attorney General Ken Paxton said in a statement.

In a statement on Facebook, San Antonio Mayor Ron Nirenberg said, "We're not going to let an ongoing court battle distract us from the real fight against COVID-19. Get the vax. Wear a mask."

Judges handling the lawsuits against Abbott have granted various temporary restraining orders and temporary injunctions that have allowed these mask mandates to continue while the cases go through the courts.

It was not immediately clear how those mandates would be impacted by the high court's Thursday ruling.

The video above is from a previous story.
Report a correction or typo
Related topics:
politicstexashoustontexas politicschildren's healtheducationface masktexas newsstudent safety
Copyright © 2021 by The Associated Press. All Rights Reserved.
TEXAS NEWS
Delta 8 products are illegal, Texas DSHS says
Man wanted for aunt's murder in Florida arrested in Harris County
New congressional maps OK'd by Texas legislature head to Abbott
8-year-old Houston girl testifies against Texas transgender bill
TOP STORIES
Boston-bound jet crashes on takeoff west of Houston with 21 on board
Houston executive 1 of 21 on board jet when it crashed in field
How residents in this Harris County neighborhood became numb to crime
Loved ones remember mom of 3 killed during home invasion
Alvin Community College offers way to tap into oil and gas
Friendswood gas fire put out after more than 5 hours since eruption
Aviation weighs in on what might have gone wrong in plane crash
Show More
Jan. 6 panel votes to hold Steve Bannon in contempt
Big warm up ahead but another cool front in the forecast
Astros vs. Red Sox: Houston ties the series after 9-2 win over Boston
Unsolved: A Life Never Lived
Alvin Community College gives inmates way to earn a second chance
More TOP STORIES News