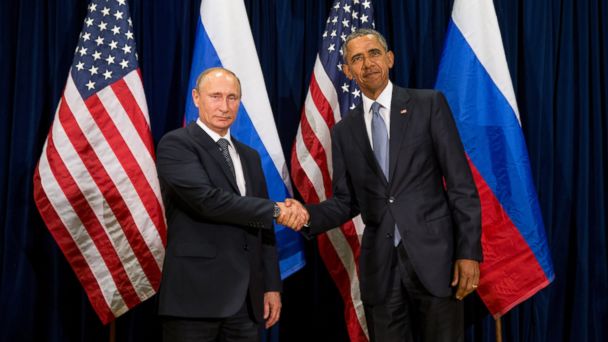 While the meeting was reportedly scheduled for only an hour, it dragged on more than 30 minutes longer than expected. Putin emerged, telling reporters that it was constructive and "businesslike," while Obama offered no immediate comments.

A senior White House official told reporters after the meeting that it was "businesslike," "productive" and "focused," though the two leaders still fundamentally disagreed on the role Syrian President Bashar al-Assad would play in solving the conflict in the war-torn country.

While the world won't likely be privy to all of details of their conversation at the United Nations General Assembly in New York City, the international community received a short preview in the leaders' dueling speeches earlier today.

Obama generated shaking heads from the Russian delegation after blaming the country for helping to prop up the "butchery" by Assad against his people. He also defended the heavy package of sanctions still being levied against Russia for its annexation of Crimea and involvement in the Ukraine conflict.

As for Putin, he dismissed the United States' program to train Syrian rebels as both illegal in nature and ineffective, claiming that the only military presence actually battling against ISIS are Assad's forces.

It's a relationship so complicated that the meeting itself managed to generate controversy ahead of today, as White House and Kremlin officials traded conflicting tales on how the two world leaders even arranged to sit down together.

"It appears that President Putin is convinced that his position would benefit from a conversation with President Obama," White House spokesman Josh Earnest said Friday. "And given the lengthy list of concerns that we have about Russia's conduct in a couple of these international hot spots, a face-to-face sit-down seems appropriate at this juncture."

But the Kremlin has reportedly denied seeking out a meeting with President Obama, suggesting to various Russian news agencies it was an idea pitched by the Obama administration.

The recent spat comes amid a new conflict between Russia and the U.S. in Syria, as Russia has recently sent a surge of military support for the regime of Bashar al-Assad, claiming to help it fight against ISIS terrorists.

After his meeting with Obama, Putin said that Russian troops would not be fighting on the battlefield in Syria, according to the Associated Press.

The U.S., in turn, has expressed frustration as it tries to prop up a small group of moderate rebels in the country, who oppose Assad as in the same vein, if not worse, than ISIS.

On Sunday, the Kremlin released footage pulled from an interview with CBS' Charlie Rose in which Putin characterizes U.S. support for Syrian rebels fighting ISIS as "counter to the principles of modern international law" and in violation of a U.N. charter.

In an interview on ABC News' "This Week" on Sunday, the United States Ambassador to the U.N. Samantha Power told Martha Raddatz that criticism of the U.S. program to train rebels is "totally fair."

"It's obviously even more complex, I think, than we would have envisaged," Power said. "We also have to grapple with the fact that if we weren't investing in Syrian-Arab forces and in moderate Syrian opposition forces, we'd be in a world where again, ISIL [ISIS] would be able to have a protracted presence without being displaced over time."

But Power also explained why despite their differences, President Obama said he was still willing to sit across from Putin today.

"Given the stakes -- the human stakes, the strategic stakes of what's going on in Ukraine and Syria -- the president believed it would be irresponsible to let this occasion in which the two leaders would be in the same city pass without trying to test to see whether progress could be made on these newly intractable crises," Power said.