Woman hit and killed by vehicle on I-10 after chase with Harris Co. deputies 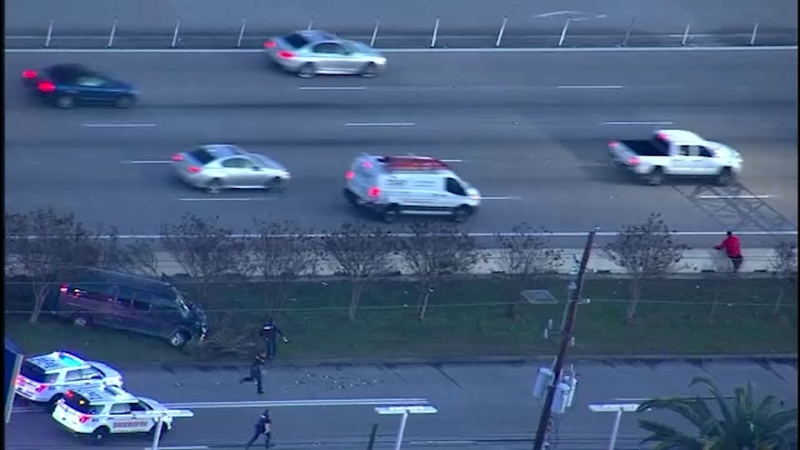 Woman killed while running from deputies across I-10

HOUSTON, Texas (KTRK) -- A chase ended with a woman being struck by a driver on I-10 Monday morning, after she fled from a car involved in a police pursuit.

The woman, who was pronounced dead at the scene, has been identified as Ashley Molina.

@HCSOTexas units pursued a vehicle. Once the car came to a stop, 3 individuals fled from the scene. Two males were quickly apprehended, a female ran onto traffic & was struck by a private vehicle near the 16800 blk of Katy Fwy. The female was pronounced deceased at the scene. pic.twitter.com/p8hGPv9vaV

Deputies were able to target the driver with spike strips, causing the van to be on rims at the end of the chase.

Press play to watch SkyEye video of the end of the chase on I-10 near Barker Cypress when the suspects crashed on the feeder and ran onto the freeway.

Before the sun rose, the suspect was driving on I-10 without headlights.

POLICE CHASE: Outbound traffic on katy freeway on west side of highway 6 is completely shut down after a police chase. It appears one suspect was hit while trying to cross the freeway & run from police. pic.twitter.com/HbLYSRV2NA

Eventually, the van crashed on the feeder road and two men and a woman jumped from the van.

The suspects ran across the freeway and deputies chased after them.

The female suspect was struck by a vehicle. She was pronounced dead at the scene.

Deputies say in total, the woman ran across all five eastbound lanes and two HOV lanes before she was struck in the westbound lanes of I-10.

According to Gonzalez, both male suspects were taken into custody.

Investigators say the pursuit began when deputies tried to conduct a traffic stop after a minor traffic infraction. Deputies say as soon as they turned on their lights, the suspects fled.

All outbound lanes of I-10 were closed for hours as crews investigated the crash.

WHY DO THEY RUN? Suspects tell their stories of high speed pursuits
WATCH: Driver in stolen Challenger Hellcat leads authorities on high-speed chase on I-10