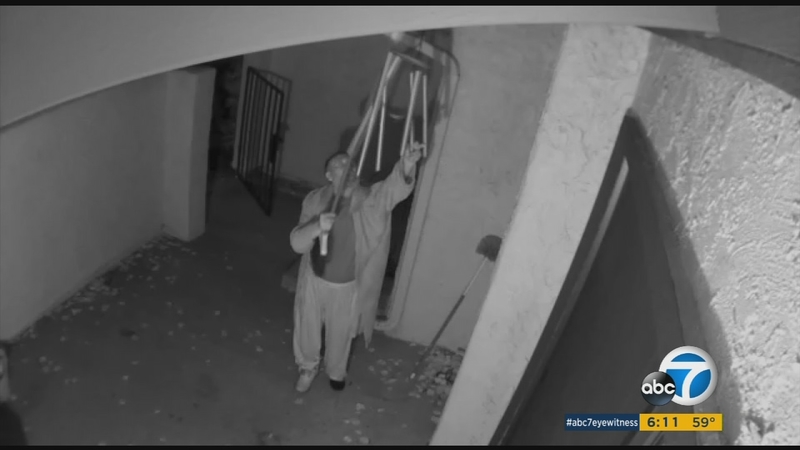 WOODLAND HILLS, CA -- A woman in Woodland Hills said she filed a police report against a man in her community for stealing off her porch and smearing human waste on her car.

Surveillance cameras catch the strangest things. In this case, it's a man harassing some wind chimes.

Jillian Lester may be smirking now, but the man in the video is her neighbor -- and the reason why she installed the security camera on her Woodland Hills front porch.

"Stuff was going missing from our porch and we kind of just assumed because he was known for being a hoarder," Lester explained.

She said after she saw the surveillance video, she filed a complaint with the Los Angeles Police Department.

When her mom told the neighbor they had him on video, he denied stealing anything but an hour later, he returned her things, along with a note and a beer as a peace offering, according to Lester.

That was not the only surprise left for Lester. Kessler also found human waste smeared all over the hood of his girlfriend's Honda.

"I'm like, 'Oh, my God!' The whole front of my car was covered in feces and vomit, and it was terrible," Lester added.

She then filed another complaint with the LAPD, but Lester said nothing has been done.
Eyewitness News tried talking to the man accused, but he didn't answer his door or his phone.

As for Lester, she's left worrying about what could happen next.