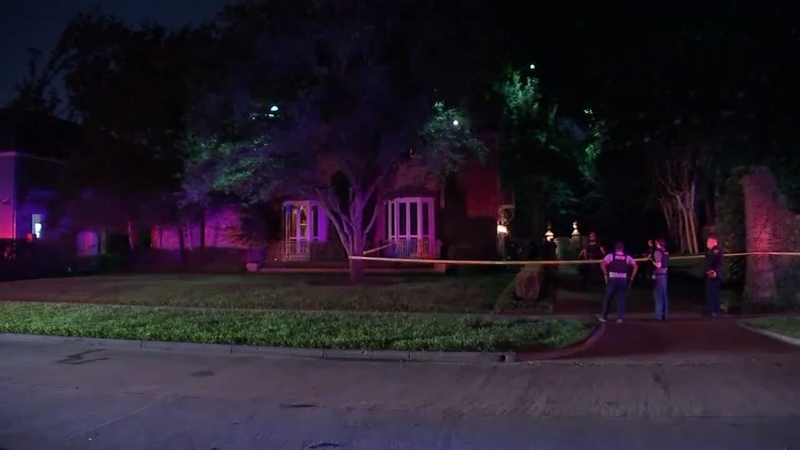 HOUSTON, Texas (KTRK) -- A man in River Oaks is dead after a woman told police officers she shot and killed him in self-defense.

Police responded to a shooting call at a home in the 1900 block of Larchmont Road just after 11 p.m. Wednesday.

Upon arrival, Houston police found a middle-aged man shot in the torso. He was transported to the hospital where he was later pronounced dead.

According to HPD, the woman who shot the man told officers he had been acting aggressively over the past couple of days. She had been letting him stay with her in the home.

The woman said she told him to leave and not come back Wednesday night. But around 11 p.m. he returned, and she said he tried to force his way in. She described the man as extremely aggressive and extremely agitated.

Police said the woman shot the man once as he was standing in her doorway.

"Kind of halfway in, halfway out," Lt. R. Willkens said. "Right at the doorway."

"Was he staying here? Spending the night here?" an ABC13 photographer asked.

The woman was detained at the home and was questioned by homicide detectives, but by Thursday morning, she was back to her regular routine. Outside her stately River Oaks home, the mobile dog groomer visited. A short while later, clean crews and workers showed up. When ABC13 tried to talk to the woman, she closed the door.

"We rarely have any type of out-of-ordinary events in River Oaks so it's sort of surprising," said fellow River Oaks resident and noted defense attorney Kent Shaffer. "It can happen anywhere in town."

Shaffer said the shooting likely either falls under self-defense or the Castle Doctrine, which in Texas means people have a right to protect their homes.

"First of all, she'd be well in her rights to shoot him if he tried using deadly force against her, whether that's a weapon, his fist, or hands," said Shaffer. "If he's trying to choke her or hit her at night, someone breaking into your house, they become aggressive, she would be in her rights to (shoot him)."

Houston police said it's turning over the findings of the investigation to a Harris County Grand Jury.

For neighbors along the 1900 block of Larchmont, there were many who drove by to look or walked by to snap a picture but were reluctant to speak about the shooting.