Lake Mead has declined about 140 feet since 2000 and now sits at 37% of full capacity.
CNNWire
By Joe Sutton and Kelly McCleary, CNN 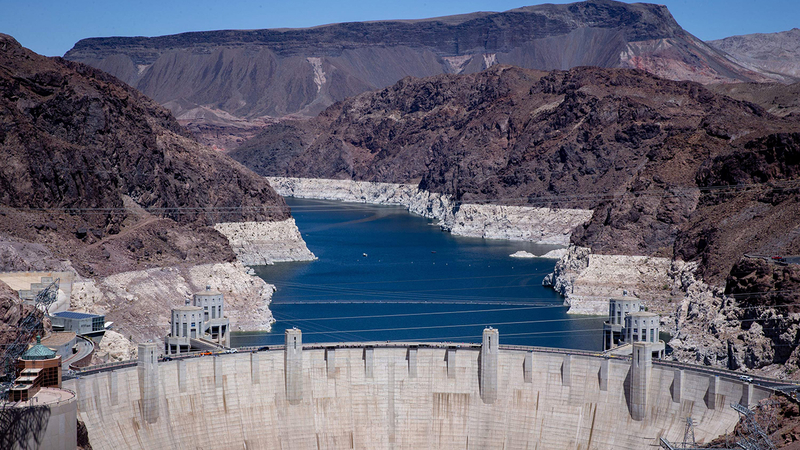 LAS VEGAS -- A crippling drought in the western US is dropping the water level at Lake Mead and the Hoover Dam to a historically low level, putting pressure on the region's drinking water supply and the dam's electric capacity.

On Thursday, Lake Mead's water level sank to the lowest it's been since it began filling during construction of the Hoover Dam, the Bureau of Reclamation told ABC News.

"Lake Mead will most likely hit elevation 1,071.61 (feet) on Thursday, June 10. That will match the previous lowest elevation on record since the 1930s," spokeswoman Patricia Aaron said.

Lake Mead and the Hoover Dam straddle the Arizona-Nevada state line along the Colorado River, about 35 miles southeast of Las Vegas. The river provides drinking water to Arizona, Nevada, and part of Mexico. The dam generates electricity for parts of Arizona, California and Nevada.

While the lake's water level reached a new low this week, it won't be the bottom. "We anticipate the elevation of Lake Mead to continue to decline until November 2021," Aaron said.

"Some years are better than others and not in all places at all times, but the region has never fully recovered with enough rainfall and snowfall to erase the deficit," CNN meteorologist Brandon Miller said.

U.S. Drought Monitor data shows more than a quarter of California is now classified in the worst category, Exceptional Drought.

Miller described the drought as a "vicious cycle" in which dry land leads to less evaporation, which leads to fewer clouds and more sun, which equals more heat and evaporation.

"Climate change is clearly playing a role, as recent years have all been among the hottest in history. The warmer temperatures are driving that vicious cycle, and making it harder for normal or even above-average rainfall years to make a dent in the drought," Miller said. "When one or two below-average rainfall/snowfall years occur, as we have just seen, the results are disastrous."

As the water in Lake Mead drops, so does the dam's electrical output. Hoover Dam usually produces about 2,074 megawatts, according to the Western Area Power Administration. That's about enough electricity for nearly 8 million people. Tuesday's capacity is 1,567 megawatts, a drop of about 25%.

With no relief in sight, officials are planning for another unprecedented declaration in August, which is when operating conditions are set for the following year. It's likely a Level 1 Shortage Condition will be declared for 2022 for Lake Mead, Aaron said, meaning surrounding states will have to implement water-saving measures.

Arizona Department of Water Resources Director Tom Buschatzke said the planned drop in water coming from Lake Mead next year will be "painful," but the department is already working on contingency plans.

"While we may have less water coming to Arizona from the Colorado River in 2022, Arizona's water managers and suppliers have been taking measures to prepare and will continue to work to ensure the river remains stable for generations to come," Buschatzke said.

CNN has reached out to the Nevada Department of Conservation and Natural Resources about its planning for future water needs.