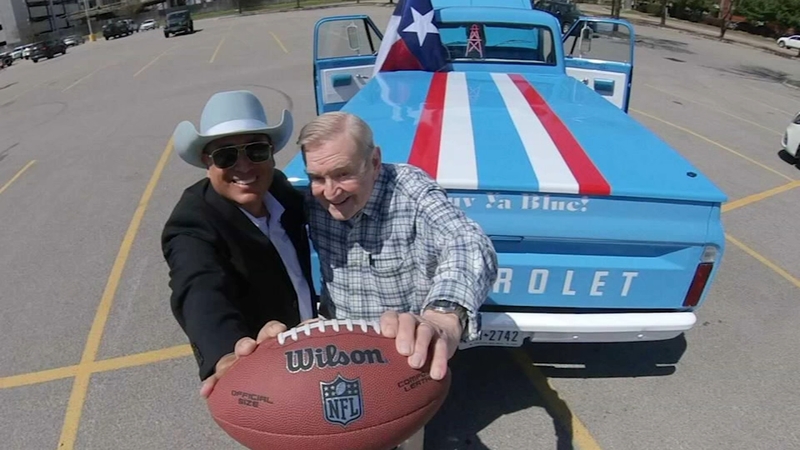 HOUSTON, Texas (KTRK) -- "Luv Ya Blue." For so many Houstonians, those three words bring back a lot of great memories. And for a lifelong fan, his love of the team involves an ABC13 legend.

Albert Carrizal grew up in Pasadena. He calls himself Mr. Oil and has a vintage 1968 Chevy truck he's painted in Oilers colors. The blue color was factory painted and he added the stripes.

The Chevy is 1968 because that was the first year the Oilers played in the Astrodome. And Albert used to attend games in the Astrodome with his dad, who was a worker in the oil business in the 1970s.

He may live in north Texas now, but Albert says Pasadena remains in his blood and his allegiance to the iconic Oilers -- Earl Campbell, Dan Pastorini, and Bud Adams -- is still strong.

Much of the former team has autographed the "Luv Ya Blue" truck. And ABC13 anchor Emeritus Dave Ward, who used to work with the Oilers, this week had the opportunity to sign the truck too.

His signature is right beneath Wade Phillips, a guest on an upcoming episode of Dave's new podcast Dave Ward & Friends. It's available anywhere you listen to podcasts. Learn more and listen to his podcast, visit his website.

I was invited to sign the famous blue Oiler Truck. It is signed by many great Oilers players including Dan Pastorini. Very honored to put my signature next to some of the best football players & coach in history.