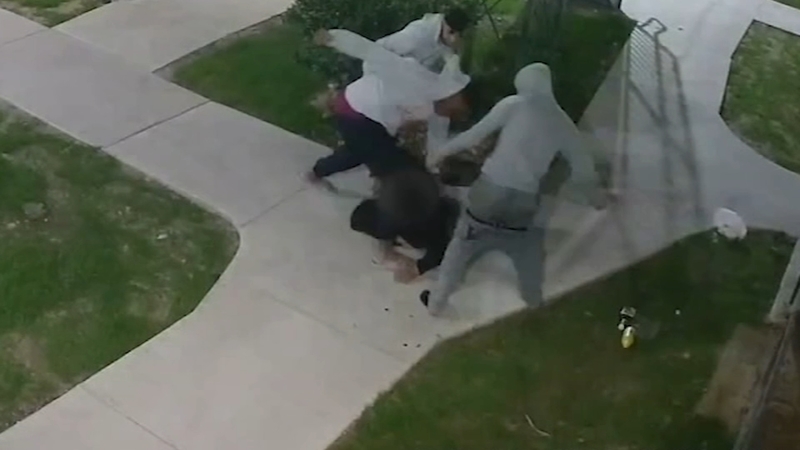 HOUSTON, Texas (KTRK) -- A man was beaten and robbed after returning home from the store on Christmas Eve. The attack was captured on surveillance video around 8 p.m.

The victim was walking into his apartment complex when three men attacked. He was kicked and punched repeatedly.

The victim said the men were demanding a phone, so he gave them his own phone.

Detectives say, what the victim didn't know at the time, was that the suspects had lost one of their phones and they tracked it. It led them to a southwest Houston apartment complex and the victim just happened to be walking by at the wrong time.

The victim had just walked into his apartment complex when he says three suspects ran up to him and began attacking him.

The victim suffered a black eye, a knot on his head, and scratches on his feet.

He had to spend several hours in an emergency clinic on Christmas Eve, ruining the holiday time he planned to spend with his wife and daughter. He wasn't able to work after the injuries.

The victim plans to return to his job this week and said he hoped that he still has a job.

After he was attacked, other neighbors got word of what had happened. They feared they would also be attacked and threw rocks at the suspects.

One was hit in the eye. All three were arrested and charged with robbery, including 23-year-old Faisal Abuamarah, 19-year-old Abdulazzez Abdulkhaliq, and 20-year-old Samuel Ibeson. All three had previous criminal records.

The video is very clear and detectives credit apartment complex management with having high quality cameras to protect their tenants.