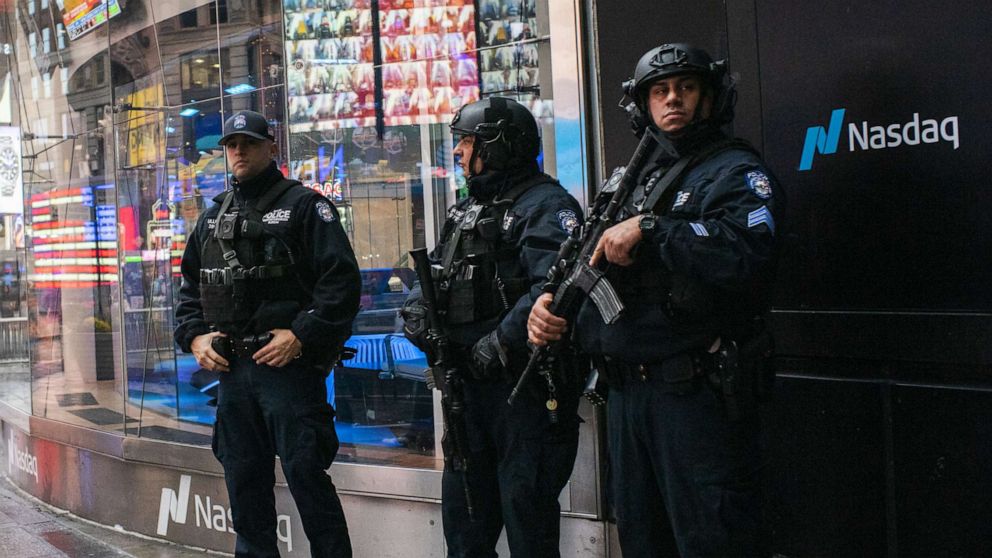 Cities around the United States are ramping up security in the wake of an American airstrike that killed Iran's top military commander in Baghdad.

"The Department of Homeland Security (DHS) stands ready to confront and combat any and all threats facing our homeland," DHS Acting Secretary Chad Wolf said in a statement. "While there are currently no specific, credible threats against our homeland, DHS continues to monitor the situation and work with our Federal, State and local partners to ensure the safety of every American."

Wolf, who said he "commend[s] the President's decisive action to protect American lives both abroad and at home," added that senior DHS leadership met Thursday night and Friday morning "to assess potential new threats" and responses to them.

"The entire Department remains vigilant and stands ready, as always, to defend the Homeland," Wolf said.

The New York City Police Department -- the country's largest -- and Mayor Bill de Blasio said they are on alert for any suspicious activity.

"What we have to assume based on previous knowledge is that the Iranians would have an interest in prominent targets, well-known American locations," de Blasio said.

Even so, the head of the NYPD's intelligence and counter-terrorism unit, John Miller, acknowledged the greater immediate threats were probably to those abroad.

"I think the more likely response in the near term would be overseas where Iran has in place proxies, in places like Syria, Iraq, Afghanistan and others," Miller said. "But we can't rely on that as New York City. We have to protect New York City."

The Los Angeles Police Department tweeted it was also monitoring the situation closely and would respond as necessary.

The nation's capital, Washington, D.C., is also on alert.

"While there are no immediate threats to the District of Columbia, we remain vigilant and [Metropolitan Police Department] & [DC Emergency Management and Homeland Security] will remain in close contact with regional and federal partners to monitor evolving events - both at home and abroad. As always, we remind members of the public if they see something, say something by contacting law enforcement of any suspicious activity," Mayor Muriel Bowser said in a statement.

The heightened state of alert comes as Iran is warning of action for the U.S. killing of Iranian General Qassem Soleimani. Iran's Supreme Leader Ayatollah Ali Khamenei described Soleimani as the "international face of resistance" and announced three days of public mourning for his assassination.

"A vigorous vengeance awaits those whose hands are tainted with his blood," Khamenei said in a statement.

In particular, counterterrorism units are on alert for attacks from Hezbollah, an organization the Department of Justice describes as "a Lebanon-based Shia Islamic organization with political, social, and terrorist components" that "was founded in the 1980s with support from Iran after the 1982 Israeli invasion of Lebanon."

"They're very, very prolific and have been for decades," Bryan Paarmann, a former special agent in charge of the counterterrorism division at the FBI's New York Field Office and current Senior Vice President at Brosnan Risk Consultants, told ABC News. "Prior to 9/11 and the rise of al-Qaida, Hezbollah killed more Americans than any other terrorist group out there."

In September, a naturalized American citizen living in New Jersey was indicted on charges he supported Hezbollah by scouting possible targets for an attack around New York City.

"Hezbollah doesn't act like a typical foreign terrorist organization," Paarmann said. "They're much more like an organized intelligence or military operation."

But cyber experts say a more pertinent threat may be virtual rather than physical.

"Iran is an intelligent cyber opponent with an army of people testing our systems every minute of every day. It is the ultimate game of cat and mouse. But in this instance, the consequences could be lasting," Sam Curry, Chief Security Officer for Cybereason, told ABC News. "Cyber is not only the poor man's nuke for asymmetric warfare, but it is also a valid domain for causing damage all by itself."

The Cybersecurity and Infrastructure Security Agency (CISA), the cyber arm of the DHS, is aware of potential threats.

CISA Director Chris Krebs shared on Twitter a statement released in June that said, in part: "CISA is aware of a recent rise in malicious cyber activity directed at United States industries and government agencies by Iranian regime actors and proxies. We will continue to work with our intelligence community and cybersecurity partners to monitor Iranian cyber activity, share information, and take steps to keep America and our allies safe."

Paarmann said that financial institutions and communication entities specifically should be on alert. In 2016, the Justice Department charged seven Iranian operatives with hacking multiple financial institutions like J.P. Morgan, Wells Fargo and American Express causing millions of dollars of damage. They also attempted to shut down a New York state dam.