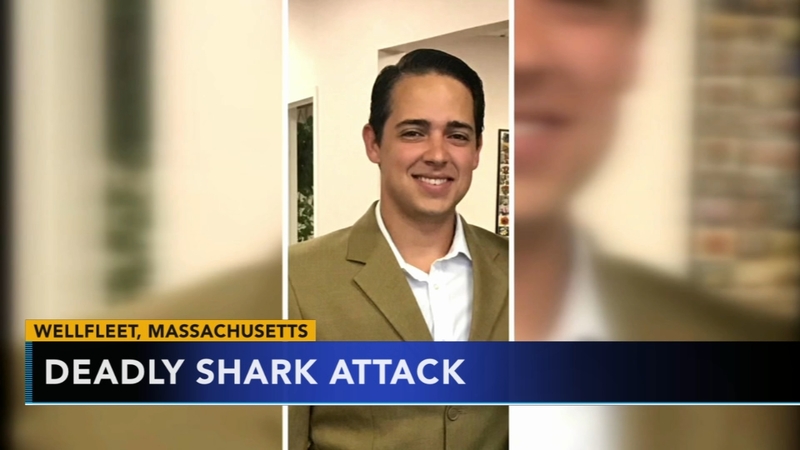 WELLFLEET, Massachusetts -- A 26-year-old man who was killed in a shark attack off a Cape Cod beach had been a part-time engineering student who was engaged to be married and loved surfing and other outdoor activities, according to friends and school officials.

Arthur Medici, of Revere, Massachusetts, was bitten by a shark Saturday while boogie boarding off Newcomb Hollow Beach in Wellfleet and later died at a hospital. He was the state's first shark attack fatality in more than 80 years and the second attack victim this summer on Cape Cod.

The beach remained closed to swimming Sunday. Flowers were placed at the base of a sign that said "No swimming surfing etc. until further notice," but some people were paddleboarding in the water, the Boston Herald reported.

A shark was spotted several miles south of Wellfleet on Sunday, according to the Atlantic White Shark Conservancy.

Medici was a part-time engineering student at Bunker Hill Community College in Boston last spring, the school said in a statement Sunday. It did not provide any other information about his studies including why he wasn't enrolled in the current semester. The school offered condolences to Medici's family and friends.

He moved to the U.S. from Brazil two years ago to attend college, friends told WCVB-TV.

A GoFundMe page set up by family and friends to cover funeral costs had raised more than $16,000 as of Sunday afternoon.

"Arthur was a very happy young man," said a posting on the page. "He loved life, he was an active member of a Christian church, devoting his life to the Lord. ... He loved hiking, biking, surfing and various other sports. ... He was always joyful and willing to help others, even going as far as feeding the homeless.

"He was happily engaged to a smart, kind-hearted medical student with a bright future," it continued. "Our lives are never going to be the same without him. His laughter filled our home and he will be greatly missed by us all."

There also was an outpouring of condolences on his Facebook page .

Medici had worked at The Capital Grille restaurant in Burlington, just outside of Boston, and left the job more than a year ago, restaurant spokesman Rich Jeffers said.

"Just like everybody else, we're shocked and saddened," he said. "It's just terrible."

Medici was attacked around noon as he and a friend were boogie boarding. The friend dragged him ashore, and people on the beach attempted life-saving measures including CPR and applying tourniquets. He was taken to Cape Cod Hospital in Hyannis, where he was pronounced dead.

On Aug. 15, a 61-year-old New York man was severely injured after fighting off a shark off Truro, about 4 miles north of Saturday's attack. He's currently recovering in a Boston hospital.

Saturday's attack was the third fatal shark attack in the world this year, with the other two occurring in Brazil and Egypt, according to Gavin Naylor, director of the Florida Program for Shark Research and curator at the Florida Museum of Natural History.