Volunteers travel from US to Ukrainian border to help those fleeing: 'There is uncertainty' 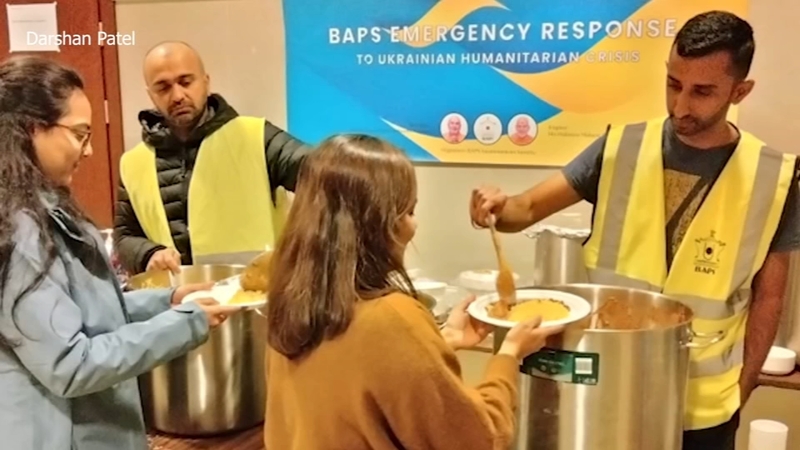 US residents travel to Poland to aid Ukrainian refugees

HOUSTON, Texas (KTRK) -- Volunteers from the U.S. are helping Ukrainians as they desperately flee from their country as war rages on.

Darshan Patel and three other volunteers from BAPS (Bochasanwasi Akshar Purushottam Swaminarayan), a volunteer-driven organization rooted in Hindu beliefs, are currently in Poland. They have been at the border welcoming Ukrainians to safety and providing them with toiletries and a warm meal, as many have escaped with very little.

He snapped photos of and videos of their group standing shoulder to shoulder with the Polish. Patel is a refugee himself. He said his deep beliefs in the Hindu teachings led him to the front lines. He spoke of a phrase that means "the world is one family," which he carries with him.

"There is another value in Hinduism where, essentially, selfless service as part of your personal character development along your spiritual journey, selfless service is one of the highest virtues that Hinduism recognizes or Hinduism at least encourages," Patel explained.

SEE ALSO: Putin and Zelenskyy: A look at the 2 men at the center of the Russia-Ukraine conflict

The team arrived last Thursday and said the work has been non-stop since. They are staying about an hour away from the border, but have traveled there several times to welcome those fleeing.

"The demeanor is one of relief, but more so of loss because although they made it outside of Ukraine there is uncertainty," Patel explained. "They don't know if they can ever return back to their home. That is a tremendous thing."

Some Ukrainians feel very strongly that they will eventually be able to their country and rebuild their homes.

As far as ways to help, Patel said groups have sent plenty of supplies and they need volunteers to help pass them out.

"It's a dynamic situation," Patel said. "Things are changing here so quickly, that the needs of what is needed here is a bit different."

He also said that prayers are very much appreciated both for the people escaping their war-ridden country and the volunteers.

"It's very helpful to the morale that there's hope to this region," he said. "It's also very encouraging to the volunteers here. It's fueling us to go and go and give it our all, essentially out here to save as many people as we can."

Patel and his fellow volunteers are from New Jersey, but BAPS has a branch in Stafford. On Monday, the team said that they sent supplies to help Ukrainians along with the volunteers.