Woman says Twitter posts got her kicked off flight 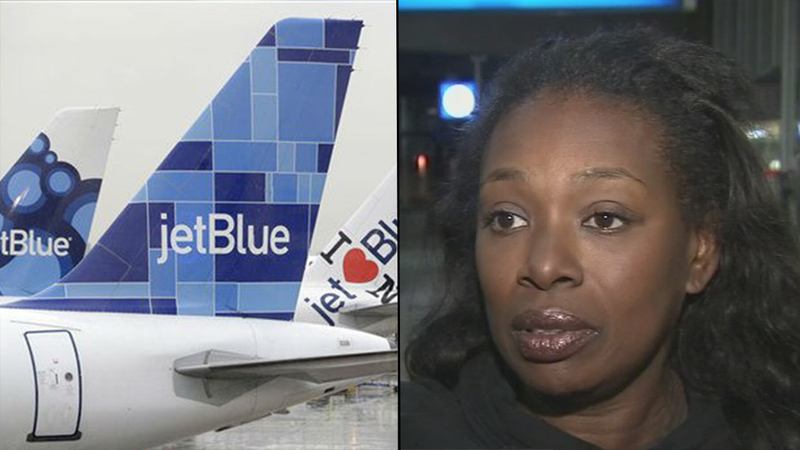 PHILADELPHIA, PA -- JetBlue has responded to a woman's allegations that her posts on Twitter got her booted from a flight on Tuesday night at Philadelphia International Airport.

The passenger, Lisa Carter-Knight, told Action News that she tweeted about an incident that began with an apparent joke that caused passengers to be removed from a plane.

In a statement responding to the incident, JetBlue officials said "It is not our practice to remove a customer for expressing criticism of their experience in any medium."

It continued: "We will remove a customer if they are disruptive and the crew evaluates that there is a risk of escalation which could lead to an unsafe environment. The decision to remove a customer from a flight is not taken lightly."

"If we feel a customer is not complying with safety instructions, exhibits objectionable behavior or causes conflict at the gate or on the aircraft, the customer will be asked to deplane or will be denied boarding especially if the crew feels the situation runs the risk of accelerating in the air. In this instance, the customer received a refund and chose to fly on another carrier."

However, the airline did not specifically say how, or if, Carter-Knight was being disruptive.

Carter-Knight says it all started what seemed to be a misunderstanding between the pilot and a joke by one of the passengers.

The remark was overheard by the pilot as the plane was being boarded.

"We had been waiting an hour, so there was a joke by another passenger - it had been a long night and he hoped there was a fully stocked bar on the airplane. The pilot ran out and said 'that's it, everybody out by the gate.' I've been accused of being intoxicated," she said.

The pilot told the more than 90 passengers he was now obligated by law to take a sobriety test. It came back negative, but delayed the flight more than three hours past its original departure time.

So, Carter-Knight began tweeting the story and says that's what got her ticket revoked.

"They were not comfortable with me being on the flight because I shared my experience tonight with friends and followers on a Twitter page," she said on Tuesday night.

She arrived at the airport early Wednesday morning to finally get a flight home to the Boston area, but on a different airline.

She added "I never accused the pilot of being drunk. I simply was communicating with family that was concerned that I was still on the ground in Philadelphia."

Overnight, JetBlue did refund her money.