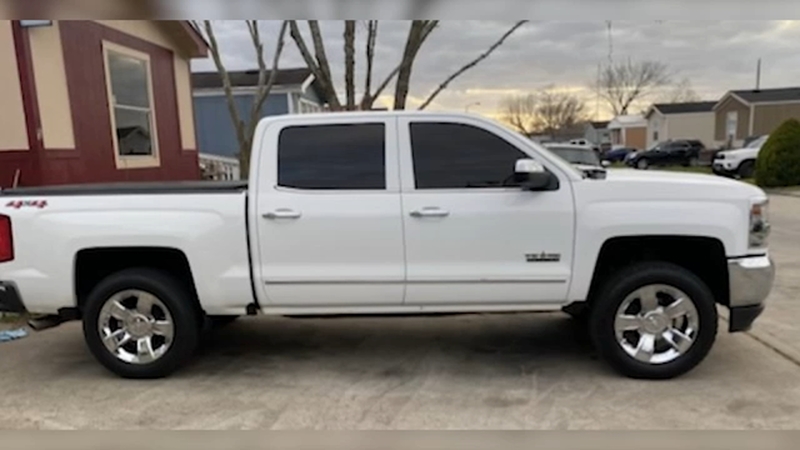 Truck stolen from dealership's lot while it was in for service

HOUSTON, Texas (KTRK) -- Houston police are looking for suspects who they said went onto a dealership lot, and stole a truck that was being serviced.

Surveillance video from AutoNation Chevrolet on the Gulf Freeway shows how quickly a truck was stolen from the car lot. It appears as if the suspects were working under the hood to inspect the truck.

Seconds later, they jumpstart it, and take off. But it wasn't even a truck for sale.

It was being serviced, and belonged to Tonya Toney and her husband.

"It was very upsetting," Toney recalled. "Just looking at my husband's face, he was upset."

"It had the leather seats, OnStar, GPS, it was fully loaded," Toney explained.

The couple brought the vehicle to the dealership for service on Friday. When they arrived Monday, it was gone.

Officers are still looking for the suspects. There's a reward of up to $5,000 for information leading to their arrest by calling Houston Crime Stoppers at 713-222-TIPS.

AutoNation said this type of theft has never happened before. However, HPD said it has a report for another auto theft from the dealership back in March.

AutoNation said it doesn't know how it happened. The dealership said it has 24/7 security. However, it's going to review policies and procedures following this incident.

AutoNation gave the couple a loaner vehicle to use and is working with insurance to figure out what happens next with the truck. It's a situation the couple never envisioned when they bought a new truck last month.

"Get a job," Toney said. "Work for what you need. We work hard for what we want. It's just not right."

When getting your vehicle serviced, experts said ask the shop where the vehicles are stored, who has access to them, and where the keys are kept. AutoNation said the keys were safely secured, but the thieves were able to jumpstart the truck.