If your car is damaged by a pothole, will TxDOT pay? Hitting Oklahoma pothole could be better than here

HOUSTON, Texas (KTRK) -- It was still dark outside when Stuart Glasscock was driving to work. He was going 65 miles per hour on Interstate-45 when he heard a loud noise and his entire car rocked, causing it to suddenly veer off to the right.

He pulled over to the side of the road after hitting what he calls a large crater on the highway, several feet wide and even longer.

"This wasn't debris on the road. This was a faulty condition in the road, a core infrastructure failure," Glasscock said. "The side of the road was riddled with about 20 other vehicles that had hit the same cavern that people call a pothole."

He filed a claim with the Texas Department of Transportation that same day, thinking he could get reimbursed or receive some sort of assistance from the agency for damage he says was caused by the state highway's condition that morning.

Within about a week, he got a letter from TxDOT saying his claim was denied because "state law does not allow for the expenditure of state funds for property damage due to the condition of the roadway."

Drivers have filed more than 6,690 property damage claims with TxDOT since 2015. Each one is given a claim ID number as the state tracks the date and location they were filed, according to data TxDOT provided 13 Investigates. The grand total drivers have been paid in the last five years? Zero dollars. 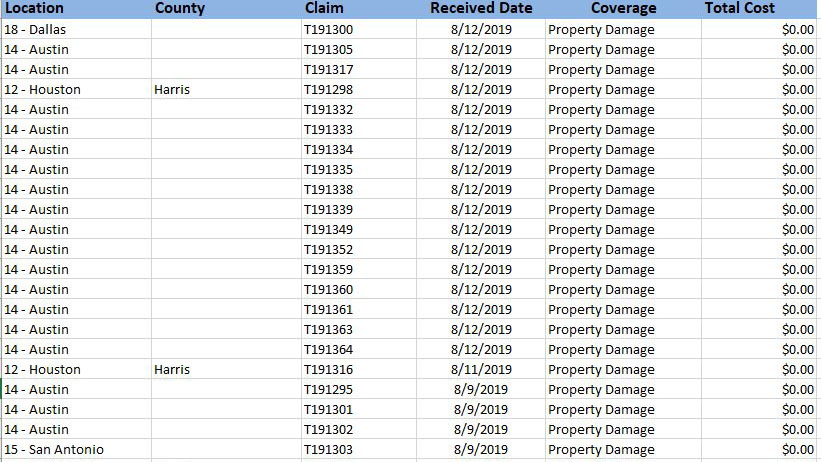 Each property damage claim is given an ID number, but how much have drivers been paid in the last five years? Zero dollars, according to data TxDOT provided 13 Investigates.

"Where's the accountability? I mean, it wasn't my fault," Glasscock said. "I fell into a bureaucratic pothole in the fact that I went through TxDOT and they told me that there's a code that says they can't use state funds to reimburse or to compensate drivers for road condition damages to their vehicles, which means TxDOT's in the free and clear."

13 Investigates asked TxDOT why it accepts those claims despite every single one being denied.

The state agency said claims would be covered if the damage arises from "the operation or use of a motor-driven vehicle or motor driven equipment," such as a TxDOT vehicle, but not highway claims from existing conditions such as a pothole.

Claims paid in other states

13 Investigates reached out to Texas' neighboring states, New Mexico, Louisiana and Oklahoma, and found those states have paid out property damage claims.

This summer, Adam Mills was driving on Interstate 235 in Oklahoma City when he said he struck a pothole that spanned the entire lane. Like Glasscock, two of his tires burst so he filed a claim with the State of Oklahoma's Risk Management Department.

"I remember reading ... that the state would pay out for pothole damage to a car, but it wasn't an easy process and it wasn't guaranteed," Mills said. "But I figured for what it was gonna cost me for two tires and a tow, it was worth trying."

There were 46 claims processed from June through August this year in Oklahoma. Only three were approved, including Mills.

The other two claims include a woman who said debris from a spray rig on a truck came off and busted her windshield and another from a man who was driving along the highway when a mower started and rocks "flew out from the blades hitting the truck."

Mills said filing a claim required submitting a form with a detailed description of what happened in addition to providing photos of the damage, and copies of his car title and receipts for repairs.

"I had to prove that the pothole existed and was on state maintained property. I had to document exactly where the pothole was and they had to send out a crew to verify that the pothole was in fact there," Mills said. "We all pay into the road system to maintain our streets and highways. And if that's not being done, then we as taxpayers are owed recompense for that."

In total, the Oklahoma paid $2,802 for the three claims it approved this summer, including Mills, who got $544.65 for his tires and tow truck.

The Oklahoma Department of Transportation reminds drivers that it is not an easy payout system. Only about 10 percent of claims are actually approved and the driver must prove the state was negligent. For example, the "agency had to be notified of a problem area prior to the incident, and given a reasonable but expedited amount of time to address the issue," according to the Oklahoma DOT.

Texas' neighbors to the east and west also have a system in place to pay drivers for similar claims.

Louisiana's Office of Risk Management says it has a pool of resources set aside to deal with road hazard claims. Residents fill out a claim form, submit pictures of the vehicle, damage as well as insurance and driver information. If an investigation determines the claim is valid, residents can get paid there, too.

In New Mexico, residents can also file a claim, and possibly get paid, if they believe their vehicles were damaged due to state roadway conditions.

"Various reasons play into whether a claim is accepted; is the location the responsibility of (the New Mexico Department of Transportation), had the department been put on notice that the hazard responsible for the damage exists, if the hazard was previously identified was it mitigated in a timely manner by the Department? Those are some of the most common things the adjusters look at but they are by no means the only things," a spokesperson for New Mexico DOT said.

In Texas, though, TxDOT recommends drivers to contact their own insurance companies for help paying for damage caused by state highways. The state agency can also point the driver "to another party who is maintaining the property other than TxDOT."

In Glasscock's case, TxDOT's letter provided the name of the company who is under contract for the area where the tire blowout occurred. He said that company would not cover the cost of the damages either. He was surprised to hear that if the same thing happened in Oklahoma, he may have had a different outcome.

Mills reminds Texas drivers this holiday season to double check that their tires are properly inflated, don't drive distracted and make sure to look ahead on the road to try to avoid hazards, such as potholes.

He also recommended reaching out to elected officials to see what changes could be made to allow Texans' to receive the same type of benefits as its neighbors.

"The state voters really need to have some talks with their elected officials about actually providing good public service," Mills said. "It's not fair that the taxpayers are made to pay for things that aren't their fault."

Have a tip for Ted Oberg? A problem to solve? Get in touch with us on our tip page, or send a tip below. (On mobile? You can open our form by tapping here.)
Related topics:
travelhoustonted oberg investigatestxdotpotholescar care tips
Copyright © 2021 KTRK-TV. All Rights Reserved.
TED OBERG INVESTIGATES