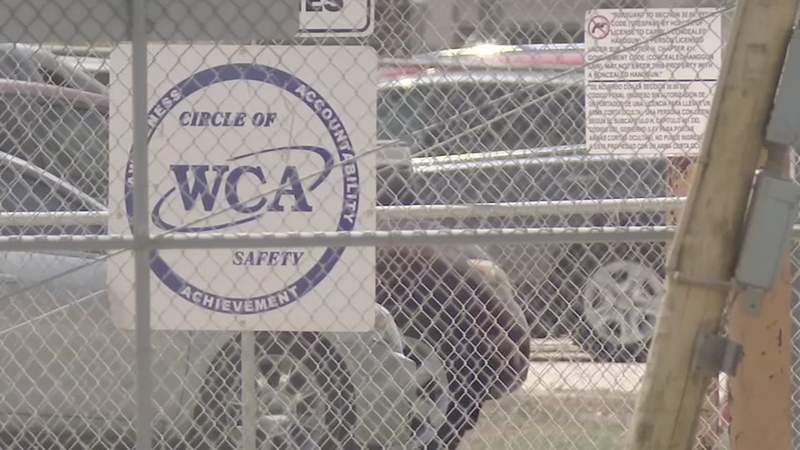 HOUSTON (KTRK) -- When Spring resident Sena Bethke hauls her trash can to the street on pickup day, many times she pulls it back home still full.

"Rotten shrimp, crab legs, oysters, cat litter," Bethke says. "Sitting out in a hot can for a week or two, it's nauseating!"

"It was OK for the first week or two," Bethke said. "Since then, I don't know that we've ever had our trash picked up consistently each week."

Bethke pays for once-a-week pickup, but at times she's waited more than two weeks for WCA to take her trash. And when she called to complain, Bethke says she received more excuses than answers.

"They never had a clue as to why you weren't picked up," Bethke said. "There's nobody that can say, 'I'm sorry, let me get this fixed for you.'"

Bethke lives in a remote part of Spring, so she didn't have many other options for trash service. She held out hope that WCA's service would improve.

"Surely this couldn't go on and on, but it can. And it did, and it did," Bethke said.

In Houston, Michelle Goldberg's Greater Heights neighborhood has used WCA for 10 years. While they pay for twice-a-week pickup, Goldberg says WCA only showed up half of the time in July.

"It looked like you were walking through a slum, and it smelled like sewage," Goldberg said. "There were maggots on the street, there were flies circling. You could smell our community as you drove in."

After nearly two weeks without service, Goldberg says her HOA hired someone with a trailer to pick up the trash and take it to the dump as a temporary fix.

Out of the blue, WCA finally returned, but Goldberg says they didn't receive an apology or a refund.

"They haven't made any sort of announcement to their customers to let them know that, 'Yes, we acknowledge your problems, yes we're going to fix it,'" Goldberg said. "Instead, they just ignore the phone calls or don't answer our questions."

From Magnolia to Brazoria, WCA customers have complained to the Better Business Bureau about similar problems. Of the 38 Houston-area complaints filed in the last year, 23 remain unanswered.

"It's obviously a company-wide issue, that they're just continuing to ignore, continuing to not respond to customers," Goldberg said. "It needs to be addressed."

Goldberg's HOA wants to dump WCA once their contract is up. Meanwhile, Bethke is already looking for a new provider.

"It's trash pickup, not rocket science. Just drive-by, pick it up, throw it in your truck and go!" Bethke said.

Despite repeated requests for an on-camera interview, WCA Regional Vice President Matt Graham would only provide a written statement:

"These accounts were part of an acquisition that was completed in November 2014. When we purchased the company, we gave the drivers retention bonuses to stay on and help us transition the company. These bonuses have been expiring over the past several months, so the drivers have been leaving. We are working to hire new drivers to fill their routes, but the market for qualified drivers is very poor right now.

This shortage is causing us to have service issues. We have diligently attempted to service all locations as soon as possible whenever the regular service day is missed. Our apologies to our customers, but we are working to get staffing back up to the appropriate levels."
Related topics:
houstontrashkeli rabon investigates
Copyright © 2022 KTRK-TV. All Rights Reserved.
TOP STORIES
Houston gets extra 'rose' after paying $240k to bring Bachelor to town
Authorities searching for 49-year-old Alvin man last seen May 19
Rain chances continue into the work week
Mother, boyfriend charged after death of 8-year-old daughter, HPD says
Manhunt underway for woman connected to deadly love triangle
More than 75,000 pounds of baby formula lands in US amid shortage
Deputy crashes while chasing suspect in slingshot motorcycle
Show More
Trial continues for man charged in Spring couple's 2018 murder
Driver who ran stoplights in fatal crash charged, HPD says
Murals, movies and more: Citywide Juneteenth celebrations to know
Deputy hit while working accident during Jeep weekend, sheriff says
Zac Brown Band's John Driskell Hopkins shares ALS diagnosis
More TOP STORIES News