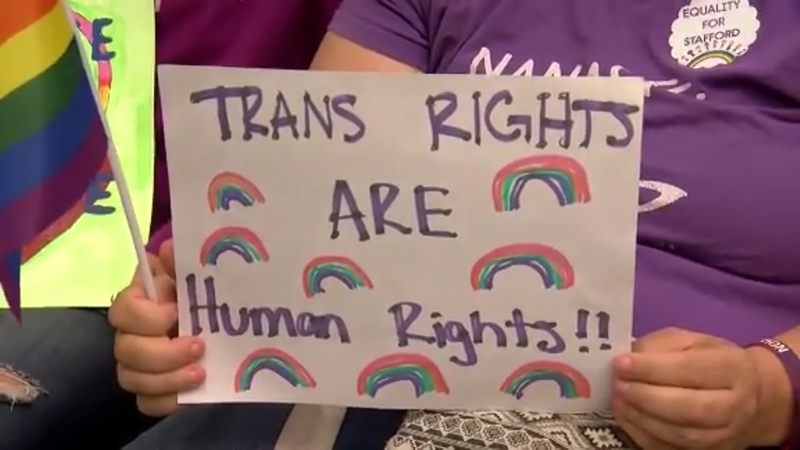 Transgender teen is upset with the treatment during recent school drill

STAFFORD, Virginia -- Members of Virginia's transgender community spoke out on Tuesday night after a transgender student says she was mistreated during a lockdown drill.

Through a letter, she shared her anguish after being asked to sit in a hallway of a locker room facing a wall alone by a door.

"If there was someone armed in my school, I would've been the first one gone," she said.

With many people calling for clearer policies, Dr. Kizner says that is something he will work on in the near future.

He says he is willing to support policies that allow transgender students to use bathrooms that correspond with their gender identity.

"(The) school board will make the final determination," Kizner said. "As a superintendent I have the moral leadership to present what I believe is the right choice for all children, so that's the direction that I will be heading."
Report a correction or typo
Related topics:
societyvirginialgbtqtransgenderteenu.s. & world
TOP STORIES
Houston gets extra 'rose' after paying $240k to bring Bachelor to town
Rain chances continue into the work week
'I fought': Trevor Reed describes his survival in a Russian prison
'Don't interact:' Driver in deadly road rage shooting speaks out
Biden: Monkeypox threat doesn't rise to level of COVID-19
Pfizer: COVID vaccine for kids 6 months to 5 years old 80% effective
Something strange is happening with our universe: NASA
Show More
Texas woman sought in fatal shooting of pro cyclist: US Marshals
Man's body found 6 miles from separate shooting call in NW Houston
Deputy hit while working accident during Jeep weekend, sheriff says
Alcohol and storms contributed to deadly crash in Asiatown, HPD says
At least 12 displaced after SW Houston apartment fire, HFD says
More TOP STORIES News