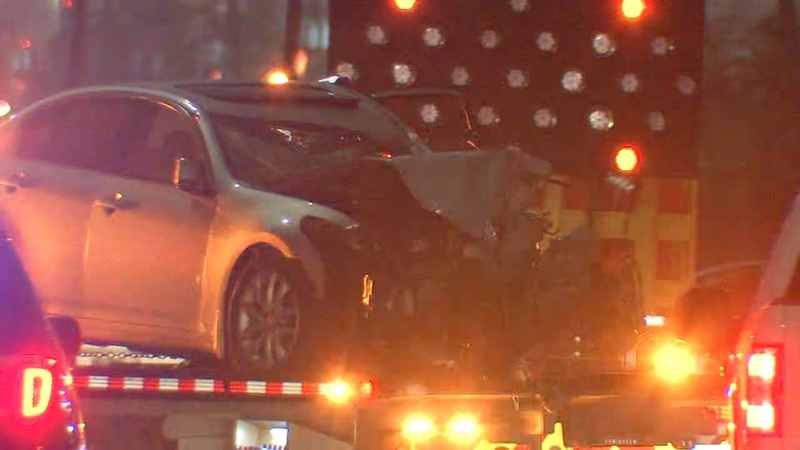 It happened in the inbound lanes near Dunvale just after 2 a.m.

"From the looks of the damage, I'm going to confirm this is a wrong-way driver crash," a first responder could be heard saying on radio scanner traffic. "Can we get with HPD to see if they have any 911 calls on wrong-way drivers? Maybe we can establish where this car came from."

Harris County Precinct 5 deputies said one person was confirmed dead at the scene, and four others were transported to hospitals.

An innocent woman in one vehicle was killed in the crash. Three others in the car with her were in critical condition, according to Harris County Pct. 5 Constable Assistant Chief Terry Allbritton

Sean Teare, Chief of Vehicular Crimes with Harris County District Attorney's Office, said it appears the crash was caused by a "highly intoxicated" wrong-way driver in a silver Infiniti.

The wrong-way driver was injured, but is expected to survive, Allbritton said. He was identified as Bobby James Brown, age 32. He will be charged with intoxication manslaughter, officials said on Wednesday.

"The message always, drunk drivers, is don't drive drunk, but people are going to do bad things. For the innocent people out there, what we always try to tell them is, when you're on a highway at night, if it's a two lane highway, stay on the right lane," Allbritton said. "Because a lot of times when these drunk drivers get up here. they think they're on a two-lane road when they're going the wrong way. So it's always dangerous at night to be on the inside lane of a two-way highway like the Westpark."

The tollway was closed in both directions for several hours due to the crash, but was reopened to traffic after 5 a.m.