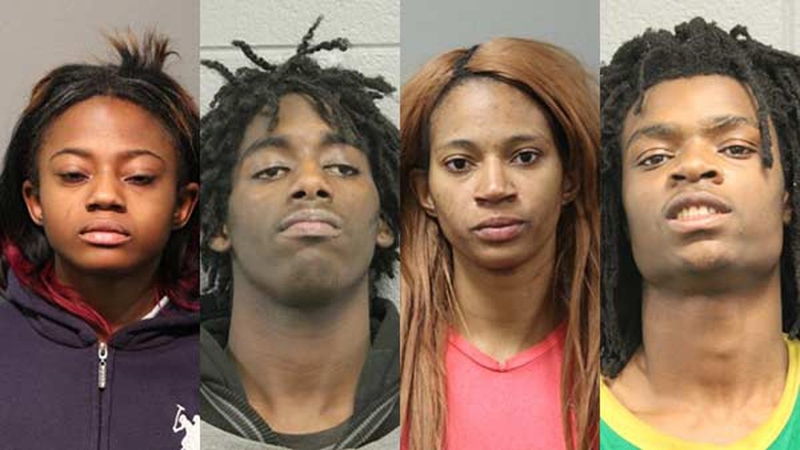 CHICAGO, IL -- Four people were accused Thursday of committing a hate crime, in connection with the apparent torture of an 18-year-old man with special needs that was streamed live on Facebook. They each face several other charges.

The video shows the victim, who police said has mental disabilities, was forced to drink toilet water, slashed, beaten and yelled at.

"Bro look. (Screaming). Get to the corner, put your hands against the wall, bro," one of the attackers said.

The victim, who is from northwest suburban Crystal Lake, was reported missing from nearby Streamwood by his parents on Monday. Police said they had not heard from him since Sunday, when they dropped him off at the McDonald's near Schaumburg and Barrington roads.

A manager told ABC7 Eyewitness News off-camera the young man often came to the restaurant to eat and would hang out until it was time for closing.

Chicago police said the victim encountered one of the suspects on Monday - apparently someone he'd met before - and he was driven into the city. They did not say which suspect that was.

"He is an acquaintance of one of these subjects. They stole a van and brought him to Chicago," Area North CPD Commander Kevin Duffin said Wednesday.

The manager said he did not see the 18-year-old leave with anyone on Monday, so he doesn't know when he came into contact with the group.

The victim's parents told officers they had received text messages from people who claimed to be holding him captive. During their investigation, Streamwood investigators found the disturbing video on Facebook, which showed he had been verbally and physically abused.

They were then notified by Chicago police that the young man had been found Tuesday wandering in distress in the 3400-block of West Lexington Street in the city's Homan Square neighborhood on the West Side. They said he was clearly traumatized.

Then investigators determined that between the time he'd been reported missing and when he was seen wandering, the victim was held between 24 and 48 hours by the group.

Police said they don't know the motive behind the apparent torture or the suspects' decision to film it. But they investigated the attack as a hate crime. At one point, the teens, who are black, told the victim, who is white, to say he loves black people.

"We do not allow people to celebrate or glorify crimes on Facebook and have removed the original video for this reason. In many instances, though, when people share this type of content, they are doing so to condemn violence or raise awareness about it. In that case, the video would be allowed."

Facebook's community standards with regard to Facebook Live state, "We understand the unique challenges of live video. We know it's important to have a responsible approach. That's why we make it easy for people to report live videos to us as they're happening. We have a team on-call 24 hours a day, seven days a week, dedicated to responding to these reports immediately."

A joint investigation between Streamwood police and Chicago police is ongoing.