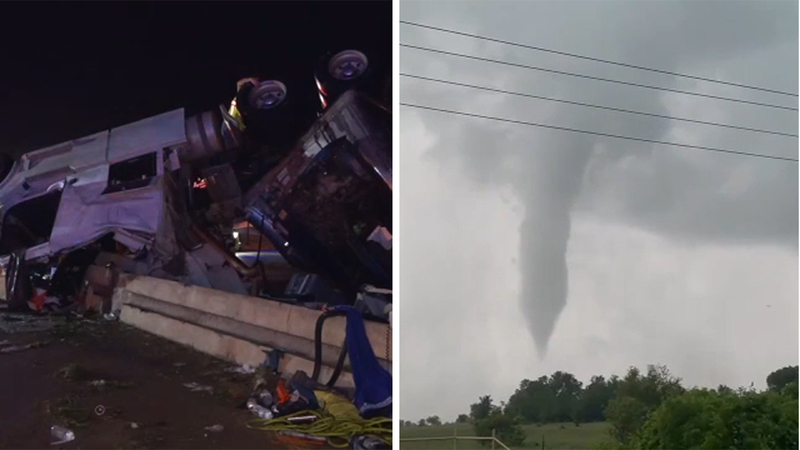 WAXAHACHIE, Texas (KTRK) -- A severe storm system brought an outbreak of dozens of tornadoes to north Texas overnight, leaving a path of destruction behind.

Hail and high winds were buffeting north Texas, where just before midnight on Monday, powerful winds from a likely tornado flipped three semi-trailers over on Interstate 35 in the driving rain, authorities said. Three people were taken to hospitals but their conditions weren't immediately known, Dallas TV station WFAA reported.

The strong storms were caught on camera as they ripped across an area that stretched for more than 100 miles.

The most dramatic video came from a storm chaser that managed to get into the path of the severe weather that slammed the Dallas area overnight.

"It is a tornado, back up! There is a tornado right in front of us!" AccuWeather storm chaser Reed Timmer could be heard exclaiming in the video.

Timmer got as close to the action as possible.

Strong winds whipped right over his vehicle near Weston, just north of Dallas.

The storm produced hail and pelted him with tree limbs.

"I can see the funnel above me. Easterlies, it's happening!" Timmer said.

More than 100 miles south near Blum, Texas, another tornado was caught on camera. The unmistakable funnel cloud was produced by the same system that slammed into north Texas.

Much of the South is at risk of more severe weather Tuesday, forecasters said, after tornadoes struck parts of the region Sunday night and Monday, causing heavy damage in some parts of Mississippi and flipping trucks in Texas.

The storms tossed 18-wheelers over on their side along I-35 near Waxahachie.

Debris littered the roadway as the contents of the tractor trailers spilled onto the freeway. Produce and hundreds of jars of Nutella had to be cleaned up.

At least two people were injured , others trapped for hours as rescue workers had to use the jaws of life to free one trapped driver.

Passersby tried to help, but simply could not free the driver on their own.

Weather U: What's the difference between a weather watch and a warning?
EMBED More News Videos

Do you know what the difference is between a weather watch and warning? Chief Meteorologist Travis Herzog says it's a question he receives often, and we're here to help clear up the confusion.

"I came across the wreck, immediately saw the 18-wheeler in the field, and we knew that we had to help. And that's when we saw the other two against the K-bar there," one witness said. "We tried everything we can to get them out. Right now, the fire department is out there, extricating both of them. Right now, we just have to pray they can get them out.

I-35 was shut down for hours, but has since reopened.

Parts of Texas, Louisiana, Mississippi, Alabama and Tennessee, as well as corners of Arkansas and Georgia are at enhanced risk for more severe weather Tuesday, according to the national Storm Prediction Center. That zone is home to more than 11 million people and includes the cities of Nashville, Tennessee; Birmingham, Alabama; Baton Rouge, Louisiana; and Jackson, Mississippi, forecasters said.

Tuesday's storms could include wind gusts of up to 70 mph (113 kph) and hail to the size of golf balls, forecasters said, noting that "tornadoes are likely Tuesday into Tuesday evening" in parts of Mississippi.

The risk follows heavy weather that moved across the South on Sunday and Monday, damaging homes and uprooting trees from Mississippi to West Virginia.

SEE ALSO: Tornado watch vs warning: What to do when you see alert messages
EMBED More News Videos