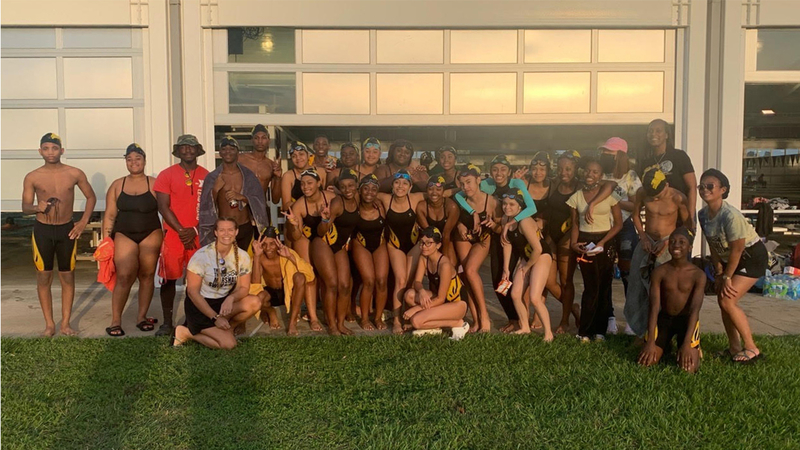 MISSOURI CITY, Texas -- After years of low participation and a hiatus during the COVID-19 pandemic, the swim and dive team at Thurgood Marshall High School of Fort Bend ISD is back and bigger than ever.

Under a new head coach, Kellyn Burke, the team made up of mostly Black student-athletes has shattered its goal of doubling enrollment numbers and is continuing to break records and make school history.

For Burke, coaching the team was fate. She originally came to the school last year to be their new English teacher for their Early College program, but once their athletic director and principal learned Burke was a former competitive swimmer, they knew they had found the new head coach for the Buffs.

"I saw that fire in Ms. Burke in regards to swimming, because if you're passionate about it, you can push that passion to your students," said Dr. Ogechi Uwaga-Sanders, principal of Thurgood Marshall High School. "Leadership matters and finding someone that is inspired is the first step. I knew that with her energy and love of swimming, she would be able to find students that may be reluctant."

Before Coach Burke took over in 2021, the school had never had more than five student-athletes on its team and was forced to take a hiatus during the COVID-19 pandemic.

When she revived their program last fall with the help of Assistant Coach KJ Mateo, they did not expect the turnout that they've had.

"I had no intentions of coaching this year. I was looking to just focus on teaching and get acclimated to the school, but once I found out about the history of the team, I knew this was what I wanted to do," said Burke. "We've tripled what my goal was for the year, which was close to 25 in the beginning. Now we're up to 35 for this semester. It's been an incredible turn of events."

Congrats to Kamryn Sterling of Marshall HS. Kamryn has been named the Swim & Dive Female Scholar Champion from the FBISD Athletic Dept. Congrats Kamryn! We also appreciate the Mayor of Missouri City, Robin J. Elackett for coming to recognize Kamryn and her Buffs Swim Teammates. pic.twitter.com/3OwEDtFoNp

That's not the only record broken by the team this year. Kamryn Sterling is the first student-athlete from Marshall High School's swim team to win the award for Fort Bend ISD's Swim & Dive Female Scholar Champion, after being nominated by Coach Burke.

"Usually I am a student of the arts. I'm in theater, art, and dance. When my mom and sister told me that Coach Burke was new and she is bringing the team up from the bottom, they told me she was going to teach the basics, and I didn't even have to know how to swim or anything. I trust the water now and I feel so relaxed every time I get in there. The water calms me. Every time I'm in the pool, I know that I can have fun and I know that it's just where I need to be," said Sterling.

Coach Burke says what makes their team unique is its diversity. She hopes to grow their team even more, each year. After seeing the impacts of Hurricane Harvey five years ago, she hopes her team will pass on these essential skills that could help others survive in a natural disaster or even a trip to the beach.

"I'm very competitive and very driven in getting us to a higher level. But if I can get everyone to feel safe in the water, our goal is just to get them to a point where they could teach others to swim," Coach Burke said.

The team will hold an upcoming Swim-A-Thon and is accepting donations through Fort Bend ISD's RevTrack. For more information about the Water Buffalos, visit their Twitter, Instagram, or e-mail them at buffaloswim@gmail.com.