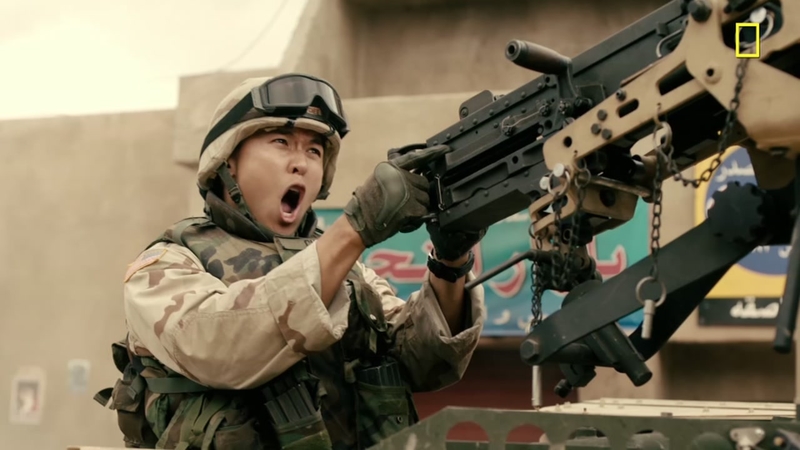 FORT HOOD, Texas (KTRK) -- On April 4, 2004, troops from the 1st Calvary Division out of Fort Hood had only been in Sadr City, Iraq a few days. They were there on what was supposed to be a peacekeeping mission.

But, as soldiers drove through the Baghdad suburb, people scattered and a quiet fell over the usually bustling streets.

The day has become known as "Black Sunday." Eight soldiers were killed and more than 65 were hurt. The attack lasted hours.

Now, this deadly day is being turned into an eight-part miniseries, "The Long Road Home," premiering on National Geographic Channel, Tuesday, Nov. 7 at 8 p.m. CT.

It's the story of survival, courage and hope, from the frontlines to the home front.

The show is based on the best-selling book by ABC News Chief Global Affairs Correspondent Martha Raddatz. Raddatz has covered the families, the soldiers and war in Iraq for a good part of her career.

Mikko Alanne is the show creator. He had one goal: to make the most authentic portrait of the Iraq War that's ever been seen on television.

Most of the production was filmed on Fort Hood.

ABC13's Courtney Fischer visits the set of "The Long Road Home," where realism of Iraq War came to life.

"To be able to film in the actual homes, walk these streets where this story took place, where so many of these families lived, I think adds another dimension of scope to this," Allane said.

"I literally have a lump in my throat all the time because we have soldiers that were there that are working for us," said Seth Reed, the set designer.

"This is a very powerful place," Bourqin said, showing ABC13 around the set.

That deadly day, Bourquin was trapped in an alley as walls and buildings exploded around him and his buddies. They seized an Iraqi house for cover. A replica of that house stood on set.

"I've got very vivid memories of coming through the door," Bourquin said.

The house is just one example of how designers transformed the already existing training village on Fort Hood.

Eighty-five buildings were built or reconstructed. During filming, it was the largest television set in North America. For Raddatz, seeing her passion project come alive on the screen is a pinch-me moment. But what she's most proud of is the soldiers and families that are being remembered.

"I have been fascinated through my career about how soldiers and families...who were in a minivan one day and a Humvee the next day, deal with fear, how they deal with things when they're put in situations they never expected to be in, no matter what their training is," Raddatz said.

"It's emotional because this is Martha's creation," said Bob Woodruff, ABC News correspondent and Raddatz's colleague. "If she didn't write this book, then we wouldn't be in this recreated scene from Iraq during the worst part of the war."

One of the soldiers who died on that day 13 years ago was Spc. Robert Arsiaga. Arsiaga's mother, Sylvia Macias, now lives in Galveston. She remembers kissing her son goodbye at Fort Hood before his deployment, like it was yesterday.

"I think about him all the time," said Macias, walking through the set with Raddatz.

ABC13's Courtney Fischer meets with the mom of a soldier who died in the Sadr City ambush.

At first, Macias was worried how her son would be portrayed in the miniseries.

"I was a little afraid, thinking about the ending. Because we know how it ends," Macias said. "It took me a while to make peace with that."

"They've welcomed me. This is my Texas family now," said Quinlan.

Macias says her heart will never fully heal, but she says she's ready for the world to meet her son, the small town Texas boy who lived for his family.

"I'm proud. I'm really proud of being here and being a part of that," Macias said.

"What I really hope is that people see the comradery and the brotherhood--maybe have a better understanding of why veterans are the way we are," said James Slevin.

Eric Bourquin added, "I'll never forget these guys. I'll go to my grave talking about these guys, their heroic deeds because if I don't, who will."