Tensions boil at UT-Austin over 'The Eyes of Texas', where students are refusing to work and a man with a gun crashed a virtual event

By Kate McGee, The Texas Tribune 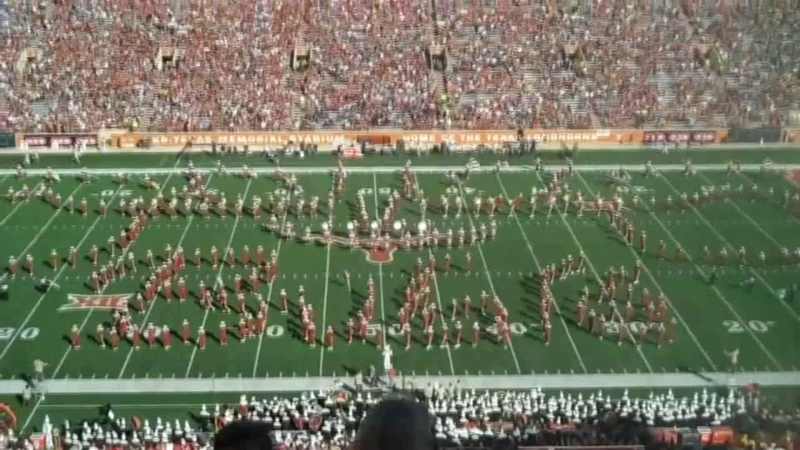 Tensions boil at UT-Austin over 'The Eyes of Texas'

AUSTIN, Texas -- Dozens of students at the University of Texas at Austin who give campus tours to prospective Longhorns are refusing to work this week over a dispute about a plaque with "The Eyes of Texas" lyrics hanging in the Admissions Welcome Center.

The dustup over the plaque is the latest example of UT-Austin officials standing by "The Eyes" over pleas that the university distance itself from the alma mater song because it originated at a minstrel show where students likely wore Blackface.

It's also the latest in a series of clashes over the song in a nearly yearlong controversy that has frequently pit administrators and alumni against students and divided members of the Longhorn community.

Just this week, a threatening incident was reported to UT-Austin police where a student-led online event about "The Eyes of Texas" was crashed by an unknown man on camera wearing a bandana over his mouth and nose and who appeared to be loading a large gun.

UT-Austin officials did not respond to a request for comment about the incidents, nor did they respond to written questions.

Students say protests over the song are not going away. Kendall Walker, a UT-Austin senior who is part of the student strike in the admissions office, said she thinks administrators wrongly assumed the issue would die down after the school formed a committee this past year to study the song's origins. UT-Austin President Jay Hartzell has repeatedly affirmed that the university will keep the song.

"I think this is the tip of the iceberg honestly," Walker said. "This is the beginning of it and people resisting that decision and not accepting a committee of people deem[ing] the song isn't racist. There's a whole generation of students and minority students that are equally and more mad than we are and don't want to enter a space that predetermined their opinions don't matter."

Members of the Texas Tour Guides said the song has created a divisive environment on campus and wanted the plaque to be removed to ensure all student employees and prospective students feel comfortable in the Welcome Center, according to more than six students who work or volunteer as tour guides and spoke to The Texas Tribune.

The guides sent a letter to the university on April 19, asking for a plan detailing for the plaque's removal by May 1 - otherwise, they said they would stop giving tours virtually or in person.

Tour guides said they suggested replacing the plaque with something symbolizing another university tradition that is more inclusive.

The admissions office would not commit to removing the plaque and told students via email on April 29 that they did not have to work as a tour guide if they had concerns.

"We understand you may no longer desire to serve in this role based on your feelings about the University's long-standing school song. If you no longer wish to serve as a Texas Tour Guide, please inform your supervisor so that your request can be processed," wrote Miguel Wasielewski, director of admissions. Wasielewski did not respond to a request for comment.

"We feel that in order to have an inclusive space where everyone feels safe and welcomed that a name change is necessary," wrote Noemi Gomez, student program coordinator in the university's admissions office.

The tour guides estimated that the strike includes roughly 55 students, about half of all the guides.

Student tour guides compared the university's action over the plaque to its recent announcement that members of the Longhorn marching band are required to play "The Eyes of Texas." The university said if they opted against playing the school song they can join a separate, newly created band where it won't be required.

Walker, who is Black, said she is often asked on tours by Black families about her experience on campus.

"I [used to] stand up there and say, 'I feel welcomed. I feel heard' ... The way that I feel has completely flipped in the past 12 months," she said. "We bring in students into this university and showcase this university in a way other students cannot. They reap so many benefits of having our presence there but can't honor something that makes us overtly uncomfortable. It's just super hurtful."

RELATED: UT says it will keep "Eyes of Texas" as school song, but will rename buildings as students call for change

Multiple students who spoke to the Tribune said they've had uncomfortable conversations with prospective parents and students about the controversy over the past year, yet they have not received any guidance for how to deal with questions about the song while giving tours. In some instances, students said questioning has gotten aggressive.

"It definitely has been an added, like, burden on my mental health to go get dressed and put on my tour guide Polo and go out and talk to families that are oftentimes like predominantly white, about like things like racial justice here on campus," said Jeremiah Baldwin, a tour guide and sophomore at UT-Austin. "I'm always like having this game of mental gymnastics that I'm playing, like, 'How should I describe this?' Or, 'Should I be as open and honest?'"

In another sign of escalating tensions, a student group recently reported an online threat related to the dispute over the song.

Last week, the Texas Orange Jackets hosted an online Zoom conversation with professor Alberto Martinez about his report on the song, which identified links to Confederate Gen. Robert E. Lee. According to students on the call and Martinez, as he was presenting, an unaffiliated person with a gun joined the call but was removed by moderators.

A screenshot of the Zoom call shared with the Tribune shows the man wearing a black beanie and a face covering over his mouth and nose while holding what appears to be a large black gun.

"The fact that a conversation about changing a song inspired someone to bring a gun to a Zoom call is just ridiculous," said Irene Ameena, a senior leader in the Texas Orange Jackets. "And shows that this isn't just some small debate. This is something that's violent, like it is violent to bring a gun and show it to people."

The student group reported the incident to university officials and the professor reported it to the UT Police Department.

"Given the sensitive nature of the matter discussed on this call, we believe this was a targeted incident," Texas Orange Jackets wrote in a statement on the Facebook page for the event. "We unequivocally condemn the racism and violence that have been brought up in conversations about this song and again call on the university to remove the 'Eyes of Texas' as the official school song of the university."

"A rebuke of their spinelessness"

Walker said she knew students who didn't sing "The Eyes" even before student athletes brought attention to the matter by demanding the school do away with the tradition last summer in the wake of the death of George Floyd at the hands of police. That demand was faced with swift opposition from alumni and heavy weight donors who clamored for the school to keep the song and threatened to pull donations if it went away. While a university commissioned report found in March that the song "had no racist intent," it has done little to diminish the controversy.

Recently, a petition calling on UT-Austin leaders to remove the song has circulated, with nearly 180 faculty as of Tuesday morning threatening not to attend graduations and university events unless it's confirmed the song won't be played. A previous petition calling for the song's removal had garnered close to 100 faculty signatures.

UT-Austin history Professor Jorge Canizares-Esguerra said the new petition was created after Martinez released his report that challenged the university's narrative about the song's history. Overall, he said professors felt as if the administration had handled the issue without properly involving faculty and students.

Members of the Texas Black Legislative Caucus and state NAACP chapters have also condemned the song. After UT-Austin released its report in early March, Black student leaders submitted a new list of demands for more scholarships, affordable student housing and increased wages for student workers to improve the experience of Black students on campus.

Brianna McBride, a senior at UT-Austin and co-director of the Black President's Leadership Council, said UT-Austin officials, including Hartzell, have been receptive to their requests and are continuing to work with student leaders to better communicate initiatives and plans with students.

As the academic year reaches an end, Canizares-Esguerra said he worried how the song and the ongoing controversy will affect the broader university if it continues

"It is not sustainable because it promotes division," he said. "It's unsustainable as a policy because it shows the world that the university is divided."

Disclosure: Facebook and University of Texas at Austin have been financial supporters of The Texas Tribune, a nonprofit, nonpartisan news organization that is funded in part by donations from members, foundations and corporate sponsors. Financial supporters play no role in the Tribune's journalism. Find a complete list of them here.