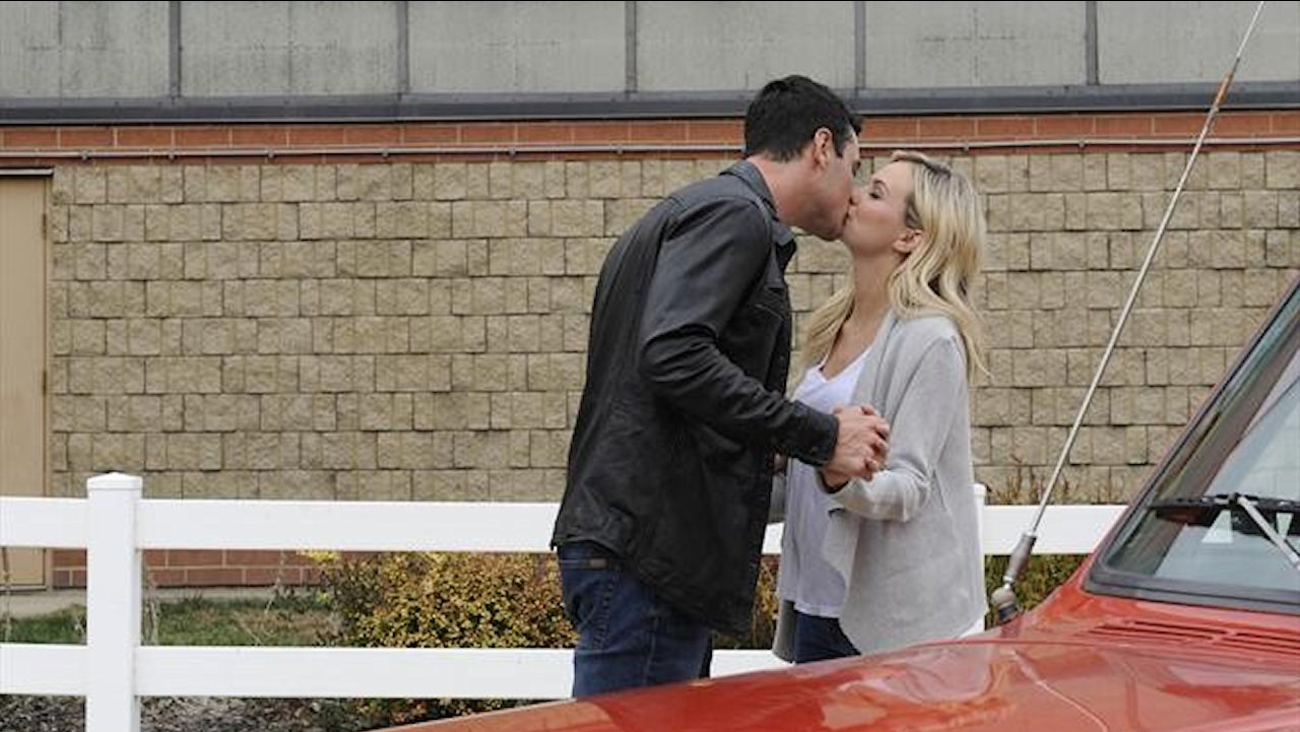 NEW YORK -- "The Bachelor" returned to Ben's hometown of Warsaw, Indiana this week. The show started off with Ben meeting up with his parents at a cute diner. After a quick talk with them, Ben met up with his final six to head over to a rental house/hotel that happened to be right near his parents' house. Lauren B. says that she's been waiting all week to talk to him about what he said to her the week before about having a little bit of doubt about her based on what Leah said about her. Lauren would get her chance luckily because Ben asked her to have a one-on-one date with him! The other women were devastated that the woman who seems to have the strongest connection with him is getting even more time alone with him. 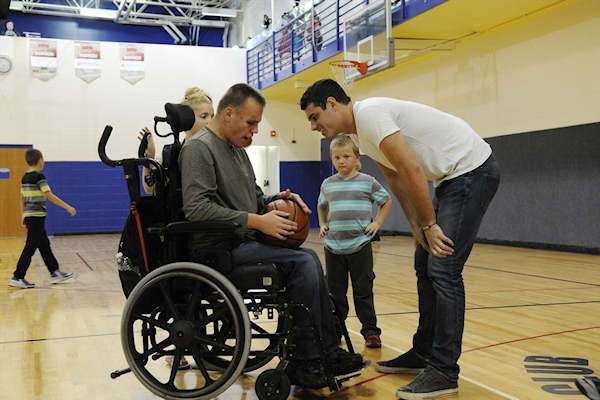 Ben drove off with Lauren in a truck for a little tour of his town where he showed her the movie theater he had his first kiss at, and then re-enacted that scene with Lauren in his truck. They drove off to a youth club where Ben had worked for four years, and they played basketball with some of the young kids in the community. All the little girls loved Lauren and said that she was really nice. Ronnie the "half court kid" was challenged to make a shot and he did it! Ben and Lauren had to kiss as part of the "bet" on whether or not Ronnie would make the half court shot. 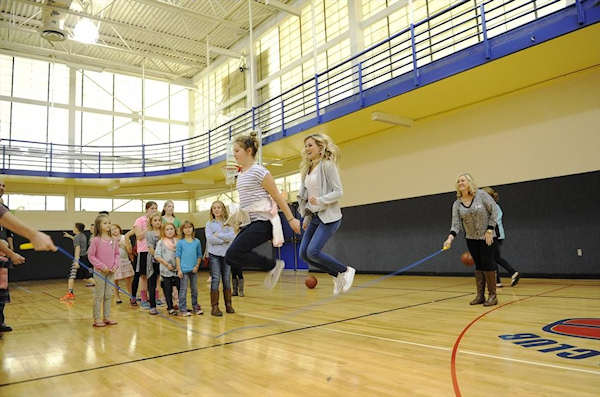 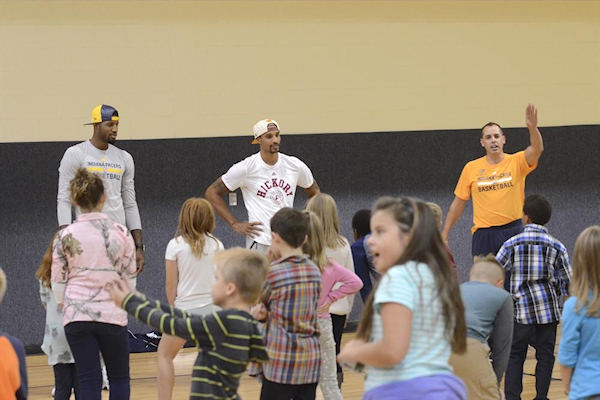 Ben told the kids he had a big surprise. Some of the Indiana Pacers along with their coach and mascot walked in! They were there to play with all of the kids and give them all some pointers. Then a little boy started to cry off on the side, so Ben gave him some special attention and asked him to play with the Pacers with him and he seemed to come around. Lauren was really happy that Ben asked her to go on this date because that community center was a big part of his life. She also loved seeing him interact with children and thinks that he'll be an amazing dad someday. 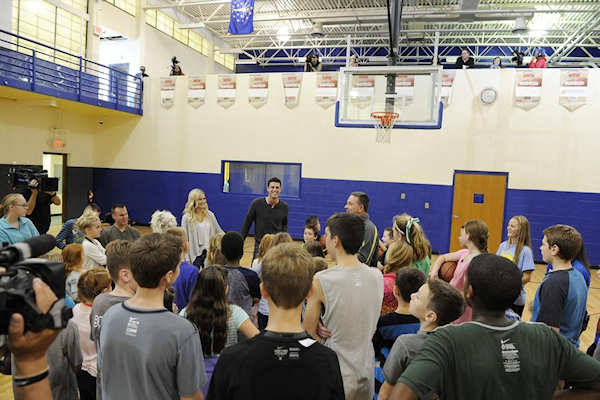 Another date card arrived and it read, "Jojo, let's find love in the windy city." That meant that Jojo would be getting a one-on-one date too!

After their time at the community center, Ben took Lauren back to "his place" to have a glass of wine and hang out. Lauren told Ben that she was nervous about their date because of their conversation the last time they talked. He said that the conversation affected him because he does have feelings for her and he's just afraid of being blindsided. She said she didn't know how to defend herself because she didn't know how to show him that it wasn't true and she felt sick to her stomach. Ben said that he feels enough about her that one person's comment wouldn't change how he feels about her and that she can trust him. That was exactly what she wanted to hear. Ben said that the date was "beautiful" and he's so glad that he knows the true Lauren. Then, he took her out to a local bar where they had a great time and they ended the night with a lot of rooftop kissing. Lauren says that she is in love with Ben from Warsaw, Indiana, not just "Ben the Bachelor". 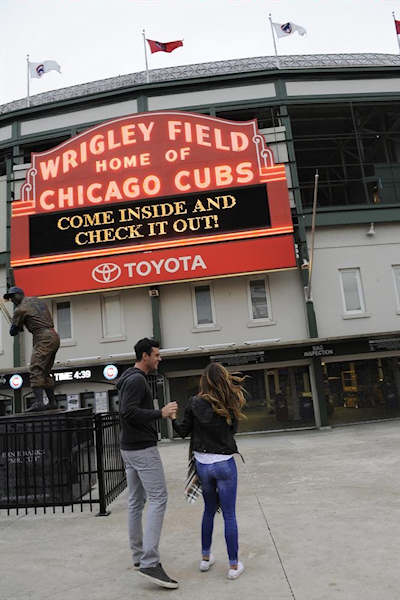 Jojo met up with Ben and they were whisked off to Chicago! They went for a special date at Wrigley Field, the home of the Chicago Cubs. They had the whole stadium to themselves. They had personalized jerseys waiting for them and Jojo's read "Mrs. Higgins". They played baseball with each other for a little bit, and Ben was very impressed with her baseball skills. They even had their date broadcast on the jumbo-tron screen. Ben said it was a perfect choice for him to bring Jojo on that date.

Back at the house, Becca said that she's jealous that Jojo got a one-on-one date. Lauren said that she's a little upset that he's out with someone else, but she's still happy with how their date went. 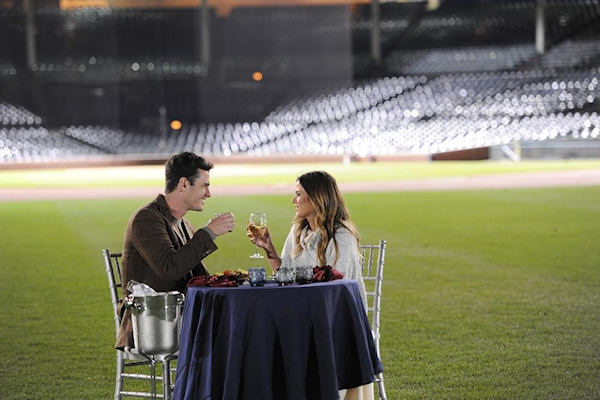 Back at Wrigley Field, they laid on the grass on the field and talked about their relationship and how happy they were to see each other again one-on-one. Ben said he can really be himself around her, and he has a deep passion for her. They shared some wine together at a private table out on the field and agreed that this was a day that they would both never forget. Ben asked her though why she is always so nervous, because he feels like things are good, but something is a little off. He says he feels a little bit like pulling away when she starts to pull away because she is scared. He's almost too honest and a little blunt with these girls! He says exactly what he thinks, and he told her that he questions if her feelings "are there". 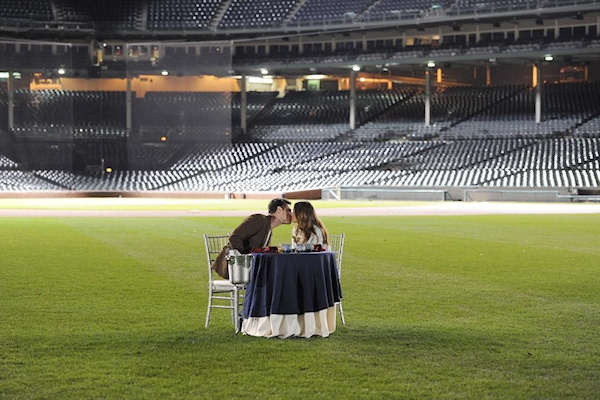 Jojo shared with Ben that she loves her boyfriends more than they've ever loved her. She doesn't want things to be that way and she wants him to know that she really cares about him. Ben says it's scary for him to think about proposing to someone and he has fears over if the other person will even accept. They kissed and Jojo said that when she's with him she feels herself falling in love.

It was time for the group date, and it was an important one because there was a rose up for grabs. Amanda, Caila, and Becca were all off together and they went rowing in some boats. Then they flew kites together. After the activities, Ben told them that the rose also represented who he would spend the second half of the date with. Ben asked Amanda to go talk first. Amanda spoke to Ben about her kids again and said she wonders why he would want to be with her, and he said those things make it easy for him to understand why she is so wonderful. He wants those things in his life. Ben and Becca talked about how she is frustrated that they've had great conversations, but she can't tell if he feels any different about her than any of the others. She said it is scary to not know if he wants to be with her, so if he isn't that interested, she deserves to know. Lastly, he spoke to Caila. They started off with a kiss, but then Caila explained that she doesn't have any meaningful places to show him because she hasn't been anywhere very long so she doesn't have those "deep roots". She's moved 17 times before college! She said she's very adaptable and would be willing to move to him or if he wanted to move where she lives, she could go either way. Then it was rose time. Ben told them all that he likes them all a lot and he really wants the person he gives the rose to, to know that he wants to meet their family. He gave the rose to Amanda! He really wants to meet her girls. He apologized to the other ladies but said it like, "Sorry ladies, but Amanda and I have a date to continue." That wasn't very sensitive!

Becca and Caila returned back to the house and explained to the ladies that Amanda got the rose and the second half of the date. Back on Amanda's date, he took her to McDonalds. Ugh, really? Sorry but that's tacky. I know that Ben and other "Bachelor" people did a McDonald's commercial, but don't bring it in to the show! It was pretty funny though. Ben and Amanda took drive-thru orders and met all the people coming through their lane. Ben and Amanda even ate a French fry like "Lady and the Tramp". Then, Ben took Amanda to a carnival in his town where everyone came out to support Ben. Everyone there seems to just love him! They rode some rides and no one threw up. Amanda said being around all of the kids at the carnival made her wish that hers were there and she's even more excited to get back to them next week.

Emily got the last one-on-one date and it involved taking the boat over to Ben's parents house. The other women were really jealous that she got that opportunity. He showed her around his house and introduced her to his parents. Emily spoke to Ben's mom and just talked so much and did it really, really fast. I felt like it was a really long time before Ben's mom ever got to get a word in! His mom said that she found Emily to be "really fun, but a little young for Ben right now." Emily continued her trend with his father. Ben's mom shared her concerns with him and she even broke out the tears! There's no way Emily is going to make it past this round.

Emily was super happy after her date and felt like the day went great. Ben took Emily to a bench where they could sit and talk on the pier. He said that his parents loved how sweet she was, but that he doesn't think that he can see her being his wife. Ouch. That was a tough thing for him to say directly to her. He said that she's been incredible to him, but he said that he knows that saying goodbye to her would be the best thing at this point. The other women were watching from their house and trying to figure out from Emily's expressions what was going on. With that, Ben gave her a hug and sent her on her way. She went back to the house to collect her things and said goodbye to the other ladies and told them about their day and a lot of tears were shed by all.

After his breakup with Emily, it was rose ceremony time. The only women with a rose already is Amanda. To that, he added, Lauren, Jojo, and Caila. Becca was eliminated! Becca kept asking him, "Why did you do that?" He was holding her hand and she dropped it, and she asked him why did he blindside her? He told her that he wasn't sure up until that moment and he didn't know how else to do it and he wanted to do it before the families got involved. She said she would rather it be now than later. Becca gave him a hug and left.

Next week, Ben visits the final four women's hometowns and Amanda's looks to be very "real," screaming kids and all. Jojo's brother gets very aggressive and tells him that he is brainwashing the women! Ok, I officially can't wait until next week!