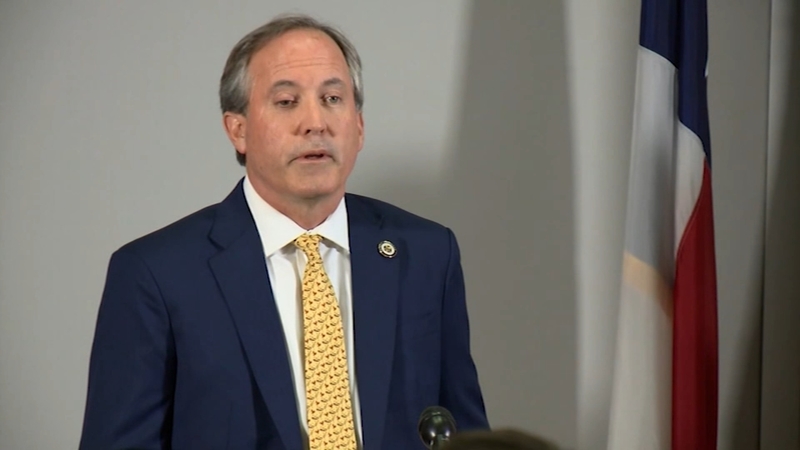 HOUSTON, Texas (KTRK) -- Texas Attorney General Ken Paxton has a target on his back and the race for AG has drawn eight challengers. There are five Democrats seeking their party's nomination. Their winner will face one of four Republicans, three of whom are taking aim at Paxton.

"For Republicans and Democrats, this is the one seat that could be in competition next fall if Paxton captures the GOP nomination," said Mark Jones, a political science fellow at the Baker Institute at Rice University. "Those three candidates have a twofold goal. First and foremost they need to keep Ken Paxton under 50% on March 1st, thus forcing a May runoff. The second is that one of them wants to be in second place behind Paxton."

With Paxton facing criminal and ethical charges, including those from former staff, the race has received national attention. Paxton is under indictment for multiple securities relate crimes and is the subject of an ongoing federal investigation into abuse of office and bribery. The state attorney general's role essentially is that he or she is the state's top lawyer who both defends and helps enforce the state's laws, including public information, child support, and other criminal or civil issues important to the people of Texas.

East Texas Rep. Louie Gohmert is among the three GOP challengers. He is critical of Paxton's efforts as AG when it comes to the border, election integrity, and mandates.

"We need an attorney general who will fight for the people of Texas, fight for our rights," Gohmert told ABC13. "If I had learned as attorney general that the Governor was thinking about saying you could go to liquor stores but you can't go to Church, then I would have been over there saying 'Let's talk about this.'"

Also seeking the nomination is former Texas Supreme Court Justice Eva Guzman - she too, is critical of Paxton.

"You can't uphold the rule of law if you think you're above it, like Ken Paxton," Guzman said. "On day one, we restore integrity. Texans deserve a high functioning Attorney General's office."

She has also has made securing the border her number one priority.

"That poses a threat to our communities and it also poses a threat to the very fabric of who we are as a country," Guzman said. "You can't live the American dream if you don't begin from a place that is faithful to the rule of law. "

Guzman and Gohmert joined fellow challenger and Texas Land Commissioner George P. Bush at a candidate forum in Houston on Tuesday. Later in the day, Bush met with supporters at a restaurant on the city's west side.

"I am the only executive with a proven track record in the private sector, the public sector, and the US military," Bush told ABC13. "I'm ready to go to the Capitol to take on human trafficking, capital crimes, to secure the border, to back law enforcement."

The Baker Institute's Jones said all three challengers have their strengths and weaknesses. He believes either Guzman or Bush give Republicans their best chance to win in November.

"When we look at Gohmert and Paxton, it's tough to say that Gohmert gives you a better chance of victory than Paxton because while Paxton has his baggage, Gohmert has his as well and so both of them could be liabilities for the GOP in November," Jones said.

That baggage refers to Gohmert's strong rhetoric regarding the legitimacy of the 2020 election before Jan. 6 and the insurrection at the US Capitol. Gohmert denounced the violence.