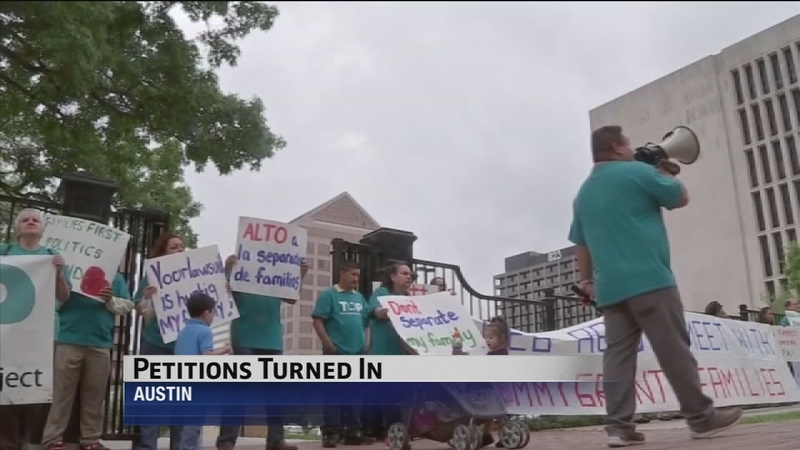 AUSTIN, TX (KTRK) -- They stood outside Texas Governor Greg Abbott's mansion and shouted, "Yes we can!" and "No DAPA, no peace!"

DAPA is part of that order, and is an acronym for Deferred Action for Parents of Americans. The rally and march to the state capitol building a couple of blocks away, was organized by the Houston chapter of the Texas Organizing Project. Along with the chants, they brought with them signs of protest, and a petition seeking action.

They want the Governor to "sit down" and meet with Latino families to discuss immigration and to withdraw the lawsuit, which the then Governor-elect Abbott filed in December when he was still the state's Attorney General.

"All of people who qualify have children who were born in the U.S., so they have American citizenship." said Mary Moreno, communications director for the Texas Organizing Project. "They want to stay here with their children. But if they get stopped for broken tail light, it could lead to a deportation proceeding and we want to keep families together."

President Obama's executive action ordered a deportation deferral for up to five million people. The lawsuit, which Abbott filed on behalf of 26 states, sought to stop that action. The matter is currently in the courts. A judge in February issued a temporary injunction, halting the President's order. The Obama administration appealed.

"One of the reasons that people from all over the world want to come to the United States is the promise of freedom enshrined in the U.S. Constitution, but the very fabric of our Constitution is under assault by President Obama's unlawful executive action. As Governor Abbott has said, the Texas-led lawsuit against the President's executive action is about protecting the Constitution from executive overreach that threatens to erode the principles that have attracted so many people to this country for generations."