By Erin Douglas, The Texas Tribune 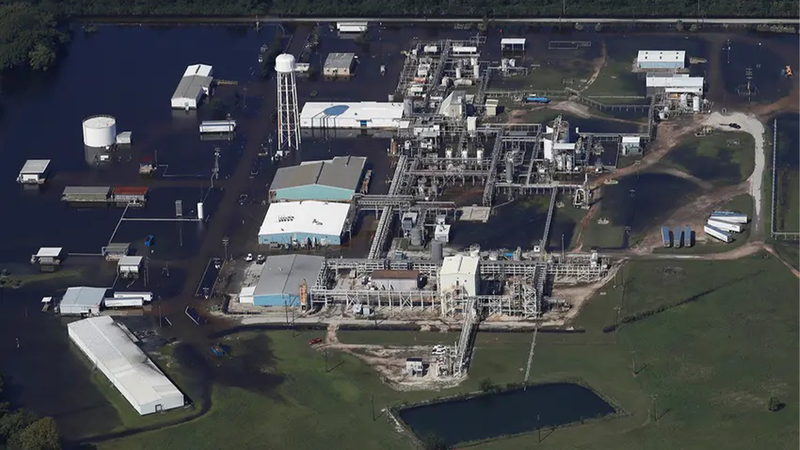 HOUSTON, Texas -- The Texas agency tasked with enforcing clean air rules often does not monitor industrial pollution during and immediately after severe weather events - often the height of emissions from refineries and chemical plants - leaving a hole in the state's knowledge of air quality, according to a new state report.

Industrial facilities, like oil refineries and chemical plants along the Texas Gulf Coast, typically shut down in advance of hurricanes and other storms to keep workers safe and avoid spills. But the process can cause pollution above what's permitted or healthy. Emergency shutdowns and other accidents, equipment breakdowns and power failures during the storms tend to create even worse levels of pollution as plants burn off waste gases, which include health pollutants and climate-warming greenhouse gases such as nitrogen oxides, carbon dioxide and volatile organic compounds.

But the Texas Commission on Environmental Quality also shuts down its air monitoring equipment to avoid damage to sensitive devices as storms approach - causing it to miss times when pollution can be highest.

"This occurs before the TCEQ is able to mobilize handheld or mobile monitoring, and often when stationary monitors are offline due to the storm," the Friday TCEQ report said. "This generates a gap in our knowledge of air quality at a time when emissions may be the greatest."

SEE RELATED: 13 Investigates: Areas that may need it most see no COVID-related air improvement

Local officials rely on TCEQ's air monitoring to aid in decisions such as when the public should shelter in place to avoid unsafe levels of air pollution. In Harris County, officials have turned to outside help for air monitoring where the state's monitors failed - a lesson those officials said they learned during the 2019 Intercontinental Terminals Company fire. In 2020, a $1.1 million grant coordinated by the Environmental Defense Fund helped the county and the city of Houston purchase equipment and plan for their own air monitoring, the Houston Chronicle reported.

The Friday TCEQ report sought to analyze samples of air collected after industrial accidents and natural disasters and compare those samples to the TCEQ's threshold for potential health and environmental effects.

But the analysis said, among other findings, that the largest amount of pollution is usually emitted during the first few days of a storm, when the state says it is unable to monitor. That means TCEQ could not fully analyze how often pollutants in the air were potentially dangerous to public health or the environment.

The report, which was authored by the TCEQ's toxicology and compliance departments, reasoned that while there is no monitoring data, high winds during hurricanes rapidly disperse the potentially dangerous levels of pollutants from industrial facilities. But the report did not offer data as to whether such high winds occur at the same time plants are polluting due to pre-storm shutdowns or weather-related upsets.

In a statement, a spokesperson with the TCEQ Gary Rasp said that previous studies cited by the Environmental Protection Agency show that the higher the wind speed, the more pollutants are diluted.

During Hurricane Harvey, the difference in monitoring data was particularly stark, according to the report.

The slow-moving storm - which killed dozens, brought widespread flooding and caused more than $100 billion in property damage - made landfall on Aug. 25, 2017, by which time TCEQ had ceased stationary air monitoring as a precaution. The Houston plants that shut down began to do so a day later, Aug. 26, 2017; startups began Aug. 29. The state did not begin monitoring in the Houston area again until Sept. 6, 2017.

During the more recent February 2021 winter storm, when millions of people lost power due to an extreme lack of electricity on the state's power grid, self-reported plant upsets - accidents, equipment breakdowns, power failures and unavoidable shutdowns - mostly occurred prior to Feb. 17, according to a graph in the report. Mobile air monitoring didn't resume typical numbers until Feb. 19, after most of the plant upsets, malfunctions and emergency shutdowns.

One graph in the report shows how monitoring plummeted during the winter storm: Air samples collected by the state fell from close to 16,000 samples per day prior to the storm to fewer than 1,000 samples on Feb 17. Sampling levels recovered by about Feb. 19.

Meanwhile, plant upsets dramatically increased during that gap in sampling, according to self-reported emission events submitted to TCEQ by the facilities.

To capture impacts from shutdowns and rolling startups of plants, TCEQ monitored air quality for six weeks following the winter storm, which prompted the state's analysis. The agency maintains a network of more than 200 stationary air monitors across Texas.

The report's analysis of industrial accidents, including the Intercontinental Terminals Company fire in Harris County in March 2019 and the Texas Petrochemical Group fire in Port Neches in November 2019, found that such fires tend to result in much higher levels of pollution than storms. The Port Neches explosion forced residents to shelter in place or evacuate. The massive chemical fire at the ITC facility in 2019 broke out after a leak at a chemical tank farm in Deer Park spread to nearly a dozen other tanks; residents were forced to shelter in place, and a plume of smoke loomed over the Houston skyline for days.

Air monitoring in the days after the ITC fire found at least two days during which benzene concentrations exceeded the TCEQ's level for potential health effects, according to the state's analysis.

While TCEQ monitors for several days or weeks following a storm, the report found that few health risks to the public are identified during that time since the majority of the pollution - and risk to the public - occurs immediately during and after the storm.

Pollution can increase when facilities restart, but since plants usually restart at different times, the "spread of startup emissions is expected to lead to fewer air quality concerns than if the same number of facilities went through simultaneous start up," the report said.

In a press release issued Friday, the agency said the key finding of the report was that few health risks were identified in the weeks after a storm had passed, meaning that the state agency does not necessarily need to monitor air quality for as long after an event as it has in the past. Widescale deployment of agency personnel to conduct prolonged air quality monitoring after a storm is often unnecessary, the press release said.

"While each event is unique and TCEQ will tailor its response to meet specific conditions, data compiled in the analysis will be helpful in deploying resources more effectively," TCEQ Executive Director Toby Baker said in a statement. "We'll be able to more efficiently provide monitoring without pulling unnecessary resources away from our mission-critical activities across the state."