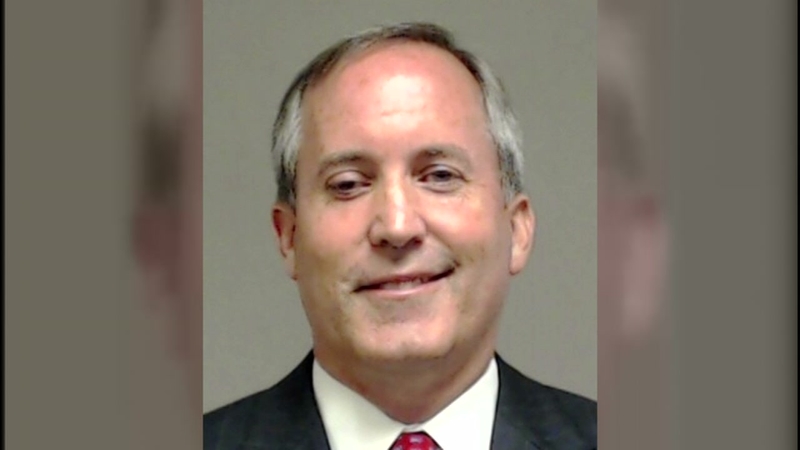 McKINNEY, TX -- Texas Attorney General Ken Paxton was booked Monday on securities fraud charges accusing him of misleading investors in a tech startup, including a state lawmaker, before he took office in January.

Paxton, a 52-year-old Republican, was fingerprinted and photographed at the Collin County jail while a throng of media waited outside. It was a frenzy reminiscent of a year ago, when then-Texas Gov. Rick Perry - who was also still in office - was booked after being indicted on charges of abusing his power with a 2013 veto.

But whereas Perry defiantly welcomed the cameras within minutes of being processed at an Austin jail, Paxton ducked reporters while leaving the Collin County jail on bond. Paxton's attorney, Joe Kendall, issued a statement hours later in which he said Paxton will plead not guilty and demand a jury trial.

"He is looking forward to the opportunity to tell his side of the story in the courtroom," said Kendall, adding that they were instructed by a judge to not comment further.

The Texas GOP released a statement saying that Paxton deserved his say in court and praised his first seven months on the job, including his recent investigation of Planned Parenthood.

"There's a reason why Texans have warily observed this news. Some of the outrageous events surrounding this sloppy process certainly do not typify the level of quality that Texans expect from our judicial system," party spokesman Aaron Whitehead said in a statement.

Just as Perry was allowed to finish his term after his indictment, Paxton can stay on the job while his criminal case proceeds. However, some are already calling for him to resign, including several Democratic Party officials who were among a small group of protesters demonstrating on the courthouse steps Monday.

In the middle of a heated Republican primary last year, Paxton admitted to violating state securities law by not telling regulators that he got commissions for referring law clients to a financial planner. He paid a $1,000 fine and chalked it up as an administrative oversight.

"Paxton is an admitted lawbreaker. Now he needs to spare Texas the embarrassment of a drawn out legal fight in the public eye, take responsibility, and accept the consequences," Texas Democratic Party Chairman Gilberto Hinojosa said in a statement.

Paxton faces two counts of first-degree securities fraud and a lesser charge of failing to register with state securities regulators. Each of the fraud counts carries a punishment of five to 99 years in prison.

Questions about Paxton's financial dealings shadowed the tea party conservative throughout his first seven months on the job. His aides have denied any wrongdoing by Paxton and described the criminal investigation led by two special prosecutors as a political smear campaign.

According to prosecutors, a state lawmaker was among those duped. While serving in the Texas Legislature In 2011, Paxton told fellow Republican state Rep. Byron Cook that he personally invested in Servergy Inc. and offered Cook a chance to also buy more than $100,000 of stock in the company, according to the indictment.

But prosecutors say Servergy was actually compensating Paxton. Unbeknownst to Cook, Paxton had been given more than 100,000 shares of Servergy stock, according to the indictment.

The Associated Press reported last month that Paxton listed himself as a shareholder in Servergy and that his name was among search terms that Servergy attorneys used to satisfy a federal subpoena. The company is under investigation by the Securities and Exchange Commission over allegations of deceiving investors.

A Pennsylvania grand jury in January recommended that state Attorney General Kathleen Kane face charges over allegations of engaging in a cover-up and lying about her role in a grand jury leak to a newspaper. Kane, a Democrat who took office in 2013, has not been charged and has denied breaking any laws. Utah's previous two attorneys generals were also arrested last summer on charges of running pay-to-play schemes during their combined 13 years in office.