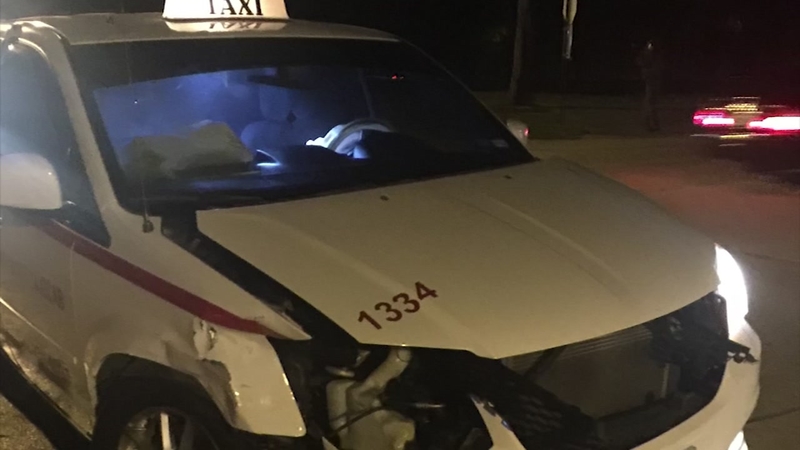 HOUSTON, Texas (KTRK) -- Unlike other major cities, getting hit by a taxi in the city of Houston doesn't guarantee you'll have the protection of a big company's insurance policy. It's something Syed Rizvi found out the hard way.

"I was going and suddenly, boom, the taxi came from the other side," Rizvi said.

Police reports show the taxi driver was at fault and got a ticket that night. Rizvi got tens of thousands in medical bills he still can't pay.

Rizvi says he has a broken finger, a broken knee and lower back pain to this day. But he can't get the surgery he says he needs.

"I'm still looking for the back surgery because I cannot afford it," he said.

It's not that he hasn't tried. Rizvi got a lawyer and sued Lone Star Taxi. The day he got hit, it looked like a Lone Star cab. But when it comes to the law in Houston, looks can be deceiving. Or at least until you look at the really fine print.

"He was painted like a Lone Star cab. And on the door, it said he was an independent contractor."

It's on most of the big company taxis you'll see in town. Among other things, it means each of these drivers carries their own insurance at limits that may surprise you.

"He was carrying only thirty thousand dollar insurance," Rizvi said.

The professional, city licensed taxi driver was carrying just $30,000 in insurance. It's all the city requires as a judge told Syed as his case was ending.

"He said, 'I have to follow our Texas law,'" Rizvi said. "I'm sorry for him and the case is closed."

"Like all small businesses, costs are a concern and the city of Houston has to balance the need for public safety with helping new businesses come into the city," said Lara Cottingham, deputy director of the city of Houston's administrative and regulatory affairs department.

When the rules were written for taxis, city leaders apparently wanted to make it easy for taxi companies to work in Houston. The city council set the limit for taxi cabs at the statewide minimum for auto insurance. Today it's just $30,000. Far less than taxis in some of Texas' largest cities and less than every other type vehicle for hire in Houston.

"Taxi is the only one that tracks with the state minimum," Cottingham said.

But it hasn't, even when the city rewrote its vehicle-for-hire rules in 2014. The city points out that statewide the average taxi accident doesn't even cost $20,000 dollars, suggesting the minimum must be enough.

However, at the civil courthouse, 13 Investigates found a dozen cases filed against the same company since Syed's. And every one of them claims more than $100,000 in damages. So it seems the city is waiting for someone to speak up.

"The city of Houston hasn't received any complaints," Cottingham said. "So if there is some kind of lack of coverage, if this is a problem that we just haven't been made aware of so far, it's something we will address."

You can submit complaints by using a form on the city's website or calling 832-394-8803. You can also email the city of Houston to complain.

It's too late for Syed.

"I can do nothing. This is the law," Syed said. "I have to follow the law. I respect the law. I can break the law. But who's going to help me out."

Houston Transportation, which operates Lone Star Taxi was not willing to discuss specific lawsuits or accidents with 13 Investigates. Owner Duane Kamins did tell us, "We do everything that is required for us to comply with city ordinance. Deviating from that ordinance would be problematic." He went on to say that when other cities have raised insurance minimums for taxis, it has forced some taxi operators out of business.