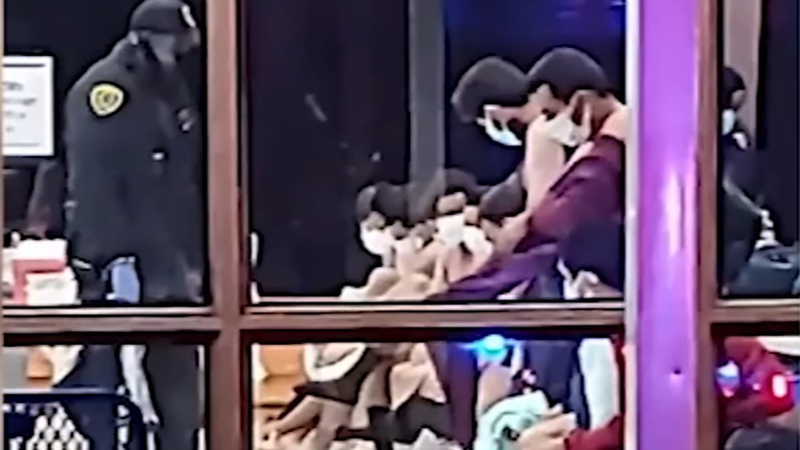 HOUSTON, Texas (KTRK) -- Haunting surveillance video captured the moment a smuggling victim made a run to look for help.

On Thursday afternoon, more than 30 men in nothing more than boxers were found inside a stash house in the 4700 block of Raven Ridge Drive on the southwestern edge of Houston.

Houston police were led to the house by a man in red boxers who was seen knocking on doors in the neighborhood around 5 p.m.

"You could hear his voice," said Adrian Hidalgo, who was inside his home when he heard the knock. "There was running around, begging. With the dogs, we couldn't hear [clearly.] Then, looking at the cameras, we can hear, 'Por favor, por favor.'"

When authorities arrived, they found the men hungry and cold. They were processed at a nearby elementary school to keep them warm. Neighbors did what they could to offer some comfort.

"We got together and we got them some clothes and the neighbors got some food for the guys because I imagine they were hungry," said neighbor Wilfredo Hernandez. "It was cold and freezing yesterday."

It was clear to authorities that this was a stash house situation, which unfortunately, is all too common in Houston.

"Houston is a hub for trafficking," said veteran immigration attorney Jacob Monty. "These are victims of the coyotes and the smugglers that are holding them for ransom. They are not surrendering them until the family members have paid an additional sum."

"I know they must have been under bad situations," said another neighbor Christina Hernandez. "For it to have to come to that point, that someone escaped to ask for help with no clothes and it was freezing yesterday."

Authorities also arrested three suspected smugglers, one who has been identified as 36-year-old Mauro Dominguez-Maldonado. According to the U.S. attorney's office, Dominguez-Maldonado is accused of being in charge of watching the victims and "performing multiple tasks in furtherance of a human smuggling operation."

Dominguez-Maldonado is a Honduran national who was illegally residing in Houston, the attorney's office said. He has been charged with harboring 29 individuals.

Dominguez-Maldonado is expected to appear in court on Monday, Dec. 7. If convicted, he faces up to 10 years in federal prison and a $250,000 maximum fine.

No other information was available on the remaining suspects from the U.S. attorney's office.

Monty said the man in red boxers, who ran out, may have given everyone in the house a lifeline.

"Ironically, the guy who ran out, actually helped himself and helped everyone else because now they will be eligible for at least two types of visas," said Monty. He points out that the U.S. government offers two types of visas for crime victims who testify against criminals. Monty said if these smuggling victims testify against the arrested smugglers, there is a chance they could have a path to a legal visa.

However, he also points out that the current immigration system attracts smugglers to take the risk because people don't have a chance to get in legally and there is so much money to be made for smuggling humans into the U.S.