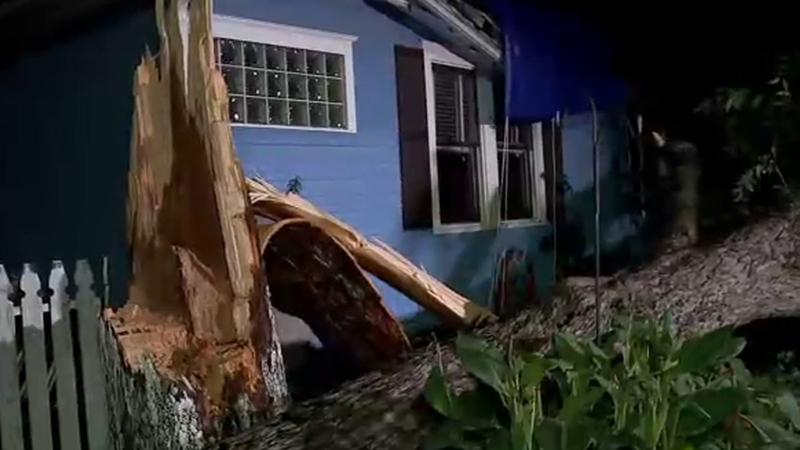 HOUSTON, Texas (KTRK) -- A Heights family says they are grateful no one was hurt after a massive pecan tree smashed through their roof.

"A neighbor called me right when it happened, it was still raining and sent me a picture, and I just had to smile and laugh," said homeowner John Solis.

His family was out of town during the Monday afternoon storms.

Neighbors say it was lightning that struck down the 100-year-old tree.

After owning the home for 15 years, Solis says he has never had to deal with damage like this, even hurricanes and tropical storms.

The house at 802 Fugate is more than 100 years old. He believes the pecan tree was planted shortly after the home was built.

"It was actually my biggest producer of pecans and it's now gone," Solis said. "It was probably 100 years old."

Inside, the tree left holes in the ceilings of the office and master bedroom.

"It's probably one of those things that we're not going to know the extent of the damage until we get in and start removing the tree itself and see what it looks like," Solis said.

Neighbors came in and mopped up the floors, and friends carried in tools, ladders and tarps to patch up the roof before the family gets back.

"It's tough to look at, but I know that it can be rebuilt," Solis said.

He tells ABC13 Eyewitness News that home was just taken off the market and will now be fixed up to sell again.