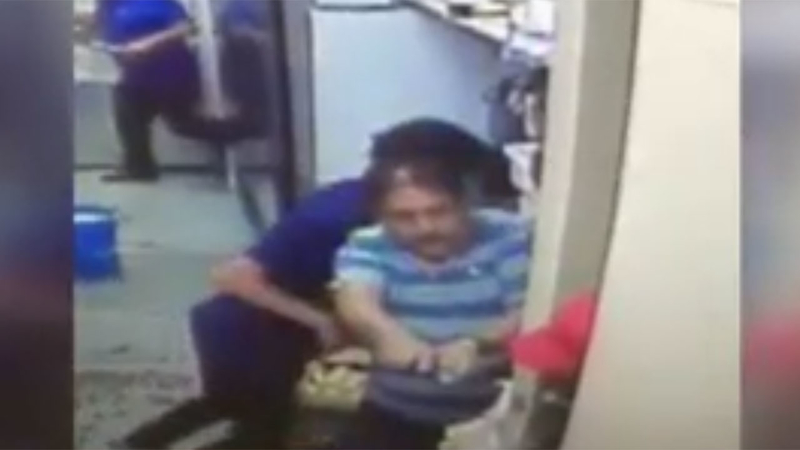 HOUSTON (KTRK) -- A convenience store owner is dead, fatally shot during a robbery at the store in northwest Houston. And now the search is on for his killer.

It happened last night at the Raceway store along FM 1960 at Mills Road at around 8:30pm. According to police, a man walked into the store, went to the cooler and grabbed a drink. He approached the counter, put the drink on the counter and pulled out a gun to try to rob the clerk.

These are photos of the suspect. If you know his whereabouts, you're asked to call police.

The clerk then ran to the back of the store into an office, where the part-owner of the business was doing paperwork. The clerk didn't close the door, and when the owner saw what was happening, jumped up to try to shut it.

The suspect was trying to get in, as the owner and clerk were trying to shut the door. That's when investigators say the suspect reached around the door and began firing, hitting the owner in the shoulder.

The owner grabbed a gun from his desk and began to exchange gunfire with the suspect. The store owner was hit again and died.

The suspect fled out the front door and through a field. It's believed he was wounded in the gunfire.

"This is a hijacker who demanded money when he didn't get what he wanted, he chased the people down, hunted them down instead of leaving the store, after a foiled robbery, he just randomly started shooting inside," said Sgt. Brian Harris with the Houston Police Department. "We don't believe he obtained anything. He even left a mountain dew behind."

The suspect is described as a black male in his 20s. He stands between 5 feet, 6 inches and 5 feet, 7 inches, and weights around 120 pounds. He appears to be between 20 and 25 years of age. He was wearing a grey short sleeve sweatshirt and red ball cap.

Police don't believe the suspect got away with anything. He even left his drink at the store.

The store owner has been identified as 51-year-old Zia Arfeen Seddiqui. He leaves behind four children. He also had a grandchild on the way.

If you know anything about this crime or the suspect, you're asked to contact Houston police.
Related topics:
houstonmurderrobbery
Copyright © 2022 KTRK-TV. All Rights Reserved.
TOP STORIES
Suspect barricaded in home after shootout with officers, HPD says
Man arrested in corporal's murder is 25-year fugitive, officials say
Deputies escort body of fallen HCSO Sgt. to funeral home
Another cold front passes through tonight
100 bags of fentanyl found in bedroom of 13-year-old who died from ...
Biden confirms he will nominate first Black woman to SCOTUS
Toddler credited with saving family of 7 from devastating house fire
Show More
K9 stabbing suspect accused of killing father with dumbbell
Amy Schneider's 'Jeopardy!' accomplishments reach past podium
Armed driver was trying to rob another driver on Katy Fwy, police say
These jobs are hiring, and they pay more than $14 an hour
No bond granted for suspect in Pct. 5 corporal ambush killing
More TOP STORIES News