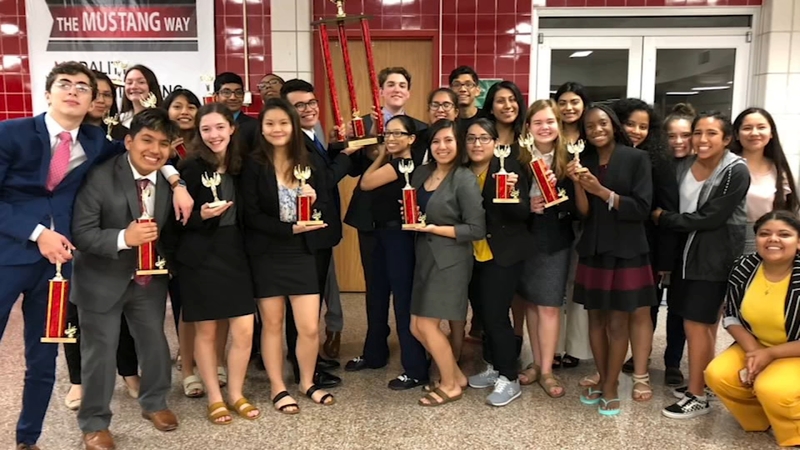 Year after year, her renowned debate team at Spring Woods High School has competed at the state and national level. The debate team has traveled the country over the past year, competing in tournaments at prestigious universities like Harvard and Yale.

"This past year, we were ranked third in the state," said Beard. "We have qualified for UIL State for 12 consecutive years."

Over the summer, the Spring Woods debate team celebrated another big honor. Team president Hunter Brown made history in Spring Branch ISD by beating out hundreds to win Congressional Debate at the prestigious National Speech and Debate Association (NSDA) tournament.

"It was the largest speech and debate tournament in the nation," said Beard. "He was the only student in Houston who won a title there this year."

His national title marks the first time a Spring Woods debate student has ever won the challenging and rigorous Congressional Debate on a national level.

"It's like a mock Congress," said Beard. "They have a docket of bills that they have prepared speeches for."

"It was a marathon," said Brown. "We were competing six hours a day over dozens of pieces of legislation."

For Hunter Brown, his experience in the Spring Woods High debate team has been life-changing.

"Before, it was very difficult for me to find the confidence to speak in front of other people," he said. "Being able to captivate people is what made me so interested in joining this program."

Competing in Congressional Debate has also inspired him to study politics in college.

"Everything I have as a result of debate is going to last me for the rest of my life," said Brown. "I am attending Rice University. I will be studying political science. Being able to advocate over national concerns every week, just seeing what it was like for the average citizen when it comes to a hundred different issues, gave me, the confidence I needed and also the drive I needed to invest my time in this nation's politics."

His path is similar to another former Spring Woods debate standout. Chris Rice, who graduated from Spring Woods High in 2014, also competed in Congressional Debate and received a scholarship to Yale University, where he majored in political science.

"He was a star in his era as well," said Beard, his former debate coach. "I was thrilled when I went to see him deliver a commencement speech at Yale. He was amazing. It was Hillary Clinton on stage, then it was Chris Rice."

Rice also credits his debate experience for shaping his life.

"When I was on the debate team, that experience meant everything to me," said Rice. "Not only was I valedictorian, but I was also the president of the debate team. I worked on campaigns. I was doing all this work because of debate, because of the skills that it gave me because of the confidence that I think that grew within me."

"I wanted to come back to Spring Oaks, which I also attended, because I want to be a role model for those kids and show them that just because you come from a neighborhood where maybe you don't see as many people going off to Ivy Leagues or becoming engineers, lawyers or doctors, that doesn't mean that that reality is shut off for you," said Rice.

"He's an amazing teacher," said Beard. "His students are currently attending our debate camp. He tells the kids that debate does make a difference."

For Beard, who has now been teaching at Spring Woods High for 15 years, it's not hard to see how debate has helped so many students become leaders.