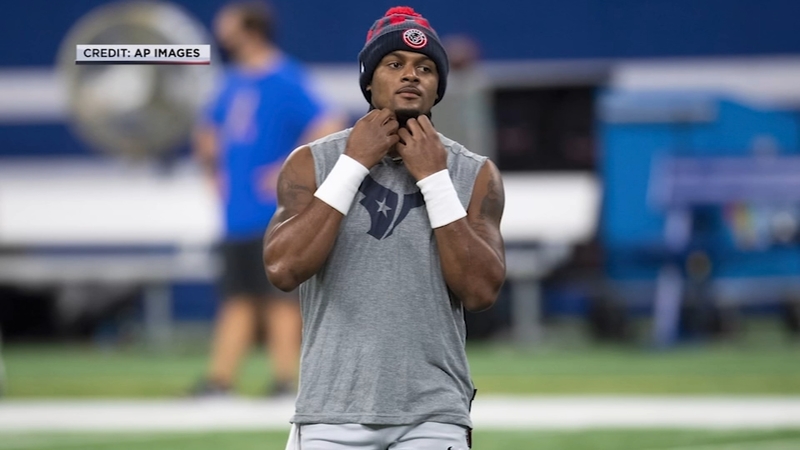 Watson's lawyer denies QB reached out to women accusing him

HOUSTON, Texas (KTRK) -- Deshaun Watson's attorney is disputing a claim that the Texans quarterback had deleted Instagram messages and has reached out to the women accusing him of unwanted sexual acts.

In a statement Monday afternoon, attorney Rusty Hardin insisted his client hasn't "deleted any messages since March 15th, the day before the first lawsuit was filed," adding "like a lot of people, Deshaun regularly deletes past Instagram messages."

Of accusations that he has reached out to his accusers to settle these cases, Hardin said they "categorically deny" the claim.

Hardin's statement in full:
Like a lot of people, Deshaun regularly deletes past Instagram messages. That said, he has not deleted any messages since March 15th, the day before the first lawsuit was filed. We categorically deny that he has reached out directly to his accusers in an attempt to settle these cases.

Opposing counsel's continued statements that these cases aren't about money do not square with the facts in at least two of these cases. It is incredibly irresponsible to continue to make these types of false allegations in this avalanche of anonymous lawsuits, particularly while we are still trying to find out who the accusers are. We will address these issues, and others raised in these cases, in our formal response to the court in the coming weeks.

The three lawsuits, which were available Monday morning on the Harris County District Clerk's website, bring the total number of lawsuits filed against Watson to 19. Despite the growing number of lawsuits, HPD, as of Monday, has stated it has not received any information from the attorney filing the suits.

All three lawsuits accuse Watson of sexually assaulting women during massage sessions by "purposely" touching them with his penis and state that his "behavior is part of a disturbing pattern."

RELATED: Timeline of the sexual assault lawsuits against Deshaun Watson

The third lawsuit also includes the accusation that Watson is deleting the Instagram messages and contacting the plaintiffs "as a result of the repeated lawsuits against him."

"Plaintiffs have not brought these cases for money or attention; instead Plaintiffs seek a change in behavior with regard to Watson, and a change of culture in the NFL," said the lawsuit, filed by Houston attorney Tony Buzbee.

Buzbee on Sunday claimed the total number of lawsuits is up to 20.

Watson has publicly denied any wrongdoing, and his lawyer, Rusty Hardin, said last week that he believes "any allegation that Deshaun forced a woman to commit a sexual act is completely false."

Hardin also said in a statement that his law firm has "strong evidence" showing that one of the lawsuits alleging sexual assault is false and that it "calls into question the legitimacy of the other cases as well."

Buzbee said earlier this month that he would submit affidavits and evidence from several women to the Houston Police Department and the Houston district attorney. Buzbee also said he will request that a grand jury consider the evidence and determine whether charges should be brought against Watson by the state of Texas.

Dane Schiller, a spokesperson for the Harris County district attorney, said last week that it would be "inappropriate" for the DA's office to comment on the lawsuits against Watson.

"It would be inappropriate for the District Attorney's Office to comment on a civil lawsuit, and we refrain from publicly discussing allegations in any matter until and if a criminal charge is filed; we do this out of fairness to all," Schiller said in a statement.

NFL spokesperson Brian McCarthy has stated that "the matter is under review" pertaining to the league's personal conduct policy, and the Texans said in a statement that they would stay in close contact with the NFL during its investigation.