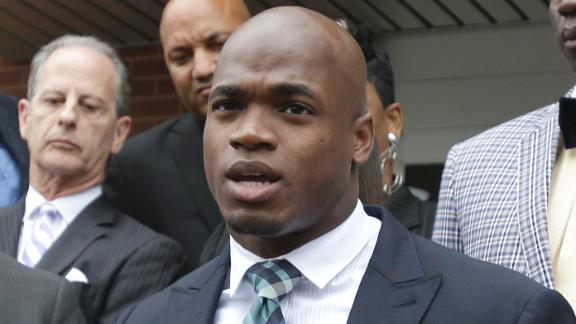 EDEN PRAIRIE, Minn. -- If Adrian Peterson is reinstated from the NFL's exempt/commissioner's permission list and allowed to return to the Minnesota Vikings, it sounds as though his teammates would be happy to welcome him back.

A handful of prominent Vikings players said Tuesday they'd be excited to have Peterson back on the roster, adding that the running back wouldn't have to do anything to regain trust in the locker room after his Sept. 12 arrest for child abuse charges led to an eight-game absence.

Peterson has stayed in contact with numerous players and coaches throughout his absence, texting a motivational speech for coach Mike Zimmer to read to the team before the Vikings' win over the Atlanta Falcons on Sept. 28 and passing along advice to rookie running back Jerick McKinnon, who has run for 445 yards in Peterson's absence.

Those types of things, players said Tuesday, went a long way toward maintaining Peterson's status as one of the team's leaders.

"We all know the kind of person he is," tight end Kyle Rudolph said. "We've stood behind him this whole time. You'd be crazy not to welcome him back into that locker room. It would be a big pickup for this locker room being we have so many young guys. Any time you can have a veteran back in that locker room, the leader that he is in the locker room, out on the practice field, would be huge for us.

"Guys have chatted amongst each other, and I don't think there's anyone in that locker room that would need to hear from him. We all know the kind of person Adrian is, and I feel like he's proven that over his time here."

Peterson pleaded no contest to reckless assault Tuesday, avoiding jail time.But only NFL commissioner Roger Goodell can reinstate Peterson from the exempt list, and league spokesperson Brian McCarthy said the league would review the court documents before making a decision. Vikings general manager Rick Spielman would not comment on the process during his midseason news conference Tuesday.

Peterson's return would help a Vikings team that's won its past two games, improving to 4-5 before its bye week. The Vikings play four of their final seven games against teams with losing records, and Peterson's presence could invigorate an offense that's ranked 29th in the league.

McKinnon and Matt Asiata have split carries in Peterson's absence, and Spielman said Tuesday he's happy with how the two backs have handled the workload. Still, adding the 2012 league MVP -- who figures to be fresh and motivated to return -- would give the offense a jolt.

"He's one of the best players in the world, and he's obviously somebody who's meant a lot to this community, meant a lot for the team," fullback Jerome Felton said. "He's one of our leaders. He was up here in the offseason. People follow his lead because of how hard he works. So it'd be pretty nice to add that back into the team."

Vikings Players Would Welcome Peterson Back
ESPN Vikings reporter Ben Goessling details the latest on Adrian Peterson's attempts to stay in contact with the team during his suspension.

Is Adrian Peterson's Return Imminent?
With Vikings RB Adrian Peterson reaching a plea deal in his child abuse case, Ed Werder discusses whether Peterson will return to the field.