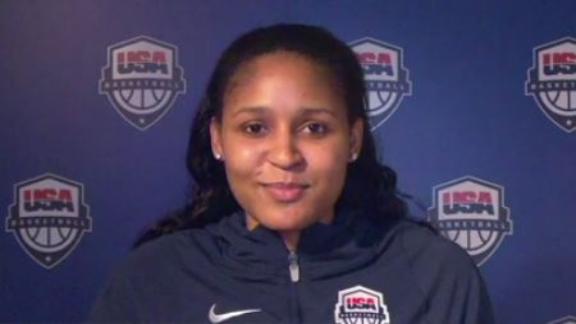 Moore scored 12 points, and the Americans clinched the top seed in the group with an 81-51 win over Canada on Friday.

The Americans (4-0) had been scoring at a record pace, topping 100 points in each of their first three contests -- the first time a team's done that at the Olympics. But they couldn't get into an offensive rhythm for the first 20 minutes against their northern neighbors.

The U.S. was out of sync for most of the first half, throwing the ball away on fast breaks and missing open shots. Canada, which already had sealed a berth in the quarterfinals for the second consecutive Olympics, wasn't intimidated. The teams had played an exhibition game before the Olympics started and Canada lost by 40, never recovering from a slow start.

In this game, it was the U.S. that struggled early. The Americans only scored 18 points in the first quarter, their lowest scoring output in any period in Rio. Canada only trailed 18-16. That's when the U.S. turned up its defense. For nearly 10 minutes, the Americans held Canada without a basket and slowly extended their advantage.

Moore was the offensive catalyst during that game-changing period. On one play, she stripped the ball from Canada's Kia Nurse near the top of the key and then raced down the court to convert a layup. Canada got its only basket in the second quarter on a three-point play by Nirra Fields with 39 seconds left in the period and the U.S. led 36-22 at the half.

Diana Taurasi, who had a relatively quiet first half hitting just two 3-pointers, helped the U.S. open get some separation in the game. She hit two 3-pointers in a row to start an 8-0 run that gave the Americans their first 20-point lead. She now has 18 in the Olympics, breaking her own team record of 15 set in 2012.

Canada could get within only 15 the rest of the way. Miranda Ayim scored eight to lead the Canadians.

Despite the loss, Canada (3-1) has already won more games than in any other Olympics. The Canadians hope to win the country's first medal in the sport. They finish pool play Sunday against Spain, trying to secure second place in the group.

The victory was the Americans' 45th straight in the Olympics. They are halfway to a sixth consecutive gold medal.

While the U.S. roster is stacked with some of the greatest players in UConn's storied history, including Moore, Canada has its own Husky in Nurse, who will begin her junior year at Connecticut this fall.

Nurse came into the game leading the team in scoring, but had a rough contest against the U.S. and her college coach Geno Auriemma. She scored just three points, missing eight of her nine shots.