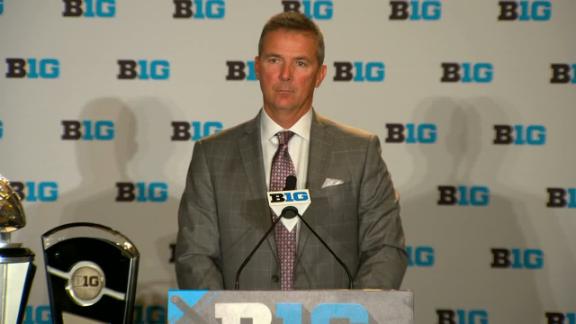 CHICAGO -- Ohio State coach Urban Meyer and Michigan State coach Mark Dantonio both strongly denied any allegations they have negatively recruited against Penn State, responding to a subtle suggestion from James Franklin that the Big Ten powers are continuing to use the program's past against it.

Franklin has brought up the difficulty of dealing with opponents using an aggressive strategy against the Nittany Lions numerous times in his career with the program.

But Meyer and Dantonio were asked at Big Ten media days on Tuesday about an interview Franklin gave to the Reading Eagle last month which appeared to name their coaching staffs of using that practice, which both adamantly refuted.

"I know we have a lot of reporters here," Dantonio said. "Everybody's got a pen. But from my standpoint, I have not said anything negative about Penn State, and hopefully our coaches have not as well. So I was surprised to read that.

"I don't know what happens out there on the road completely. But it's not our MO, and that's not how we do business."

Meyer appeared to be caught off guard when asked during his podium session about the issue. After walking off the stage he reiterated to ESPN that he would speak with Franklin to clear up the matter after denying Ohio State used any negative recruiting against Penn State.

"Absolutely not," Meyer said. "And that's the first time I've heard that. I'll address that with coach Franklin if that is an issue. That's a pretty strong allegation that I've not heard yet. So that's not been presented to me until this moment. Absolutely not.

"We've got a great deal of respect for every school in our conference, and we do just fine with recruiting. We don't worry about that stuff. I'm glad you told me that. If that's true, I'll address that."

Franklin refused to comment when reached by phone, but told Fox Sports that he "didn't name who that was" making the attacks against his program.

"The people we're competing with -- Ohio State, Michigan, Michigan State, Notre Dame -- this is just not something they have to deal with," Franklin told the Reading Eagle in June. "Although we want to move on, those other schools are not letting us move on.

"We're able to tell kids they're going to compete against the very highest level week in and week out. What makes it tricky, they're not having to deal with some of the things we're dealing with and working through, which magnifies it. Those programs as well as others know that and use that against us. We have that conversation with every single prospect. We don't usually initiate it, but it's coming from somewhere."
Related topics:
sportsespnmark dantonioohio state buckeyesurban meyercollege footballmichigan state spartansjames franklinpenn state nittany lions
Copyright © 2021 ESPN Internet Ventures. All rights reserved.
TOP STORIES
Houston stretch of I-45 named most deadly highway in the U.S.
Woman charged with murder after shooting homeless woman
2 drivers die when out-of-control Ferrari crashes on Westheimer
10 women file HPD complaints against Deshaun Watson, lawyer says
Video shows robber snatch bank bag and then speed off in Jeep
Heat continues Monday, but cooling downpours return Tuesday
Man charged with shooting transgender woman he met on dating site
Show More
Texas firefighter's death in Cancun was not an accident, family says
Pink offers to pay Norwegian beach handball team's uniform fine
Pride Houston parade plans canceled due to COVID-19 spike
Houston skate park attracting athletes from around the world
Utah sandstorm leaves 8 dead in 22-car pileup
More TOP STORIES News