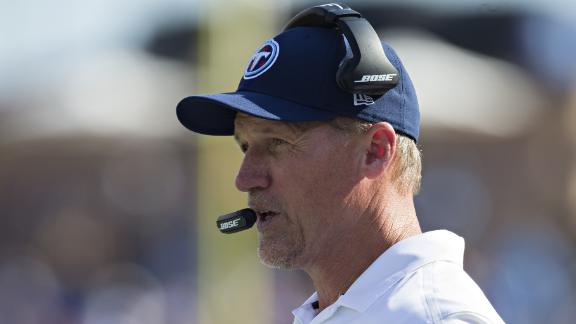 NASHVILLE, Tenn. -- Tennessee Titans president and CEO Tommy Smith said in a radio interview Friday that while the team's coach and general manager are safe, members of the underachieving offensive line shouldn't feel the same.

Asked in an appearance on The Wake Up Zone on 104.5 in Nashville on Friday morning if there is any scenario where he'd make a change from coach Ken Whisenhunt or GM Ruston Webster, Smith said, "I can't see that at all, no."

In more jeopardy are members of a struggling offensive line, where the Titans have spent No. 1 picks on right guard Chance Warmack and left tackle Taylor Lewan and given big free-agent contracts to left guard Andy Levitre and right tackle Michael Oher.

"We spent a fortune to build this line," Smith said. "I am committed, I've told the coach, I don't care when someone was drafted or what they're paid, if they're not getting the job done, to get somebody else.

Smith also said he's intrigued to see how quarterback Zach Mettenberger develops in the season's second half and that the Titans would be happy to play in London if asked.

Titans Coach And GM Are Safe
Jarrett Bell discusses that while the Titans president and CEO Tommy Smith has indicated that the jobs of coach Ken Whisenhunt and general manager Ruston Webster are safe, there are several coaches around the league who are on the hot seat.

Midseason Report: Tennessee Titans
ESPN Tennessee Titans reporter Paul Kuharsky assigns a midseason grade to the team as it comes off its bye week at 2-6 for the 2014 season.