The evolution of the James Harden-Giannis Antetokounmpo feud 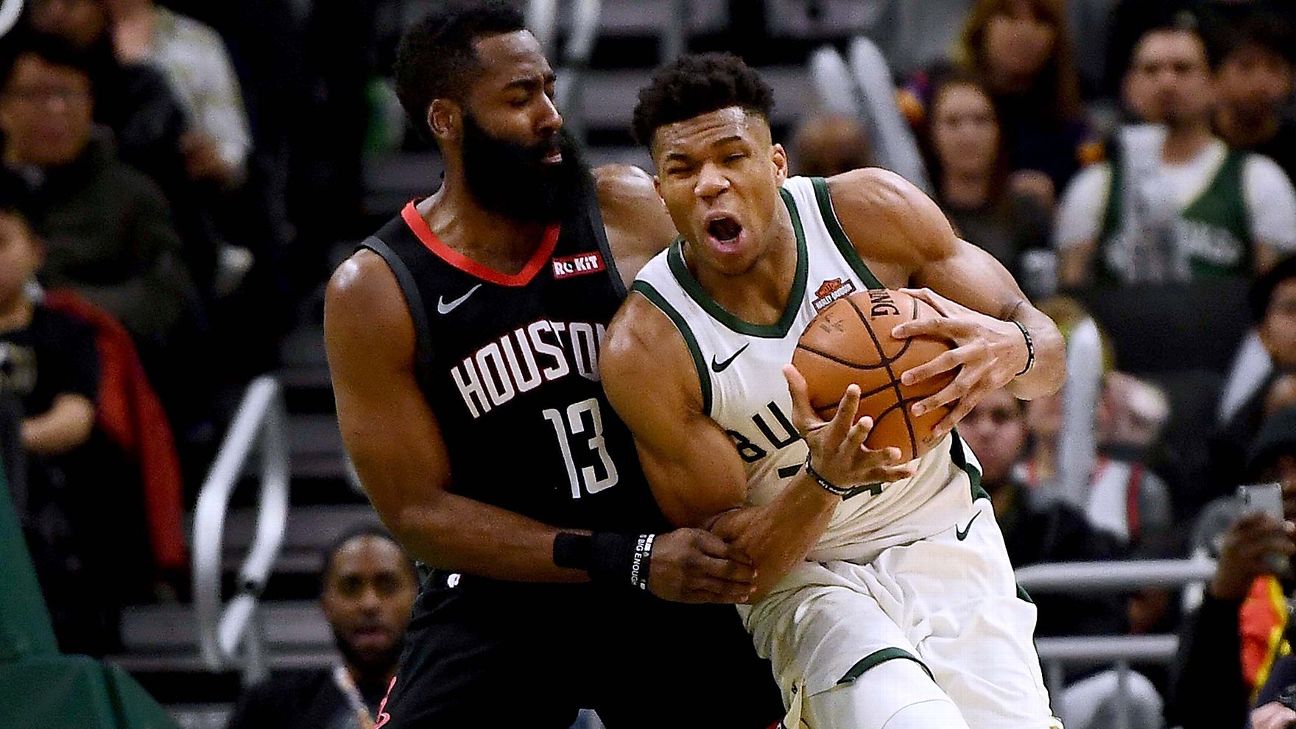 The Houston Rockets' official Twitter account took what could be considered the first jab in the beef between two of the NBA's biggest superstars seconds after Giannis Antetokounmpo was announced as the league's 2018-19 MVP.

James Harden finished as the runner-up for the third time in five seasons, which didn't sit right with the Rockets organization. The tweet has since been deleted but was certainly up long enough to send a message.


"Congrats to the MVP, but we respectfully disagree," the tweet read before rattling off several bullet points making a case that Harden should have been the repeat winner, such as that he was the first player in NBA history to average at least 35 points and seven assists per game for a full season.

It's common for franchises to lobby for their stars to receive postseason honors. But the timing of this tweet -- as first-time winner Antetokounmpo was making his acceptance speech -- was perceived by many around the league as poor form, a disrespectful display of sour grapes.

"The Beard" and "The Greek Freak" have exchanged a handful of jabs since, some direct shots, others more subtle.

As Harden's Rockets prepare to face Antetokounmpo's Milwaukee Bucks in the bubble in Lake Buena Vista, Florida (8:30 p.m. ET, ABC), get up to speed on the pokes between the perennial MVP candidates over the past year.

"I went out there and did what I was supposed to do at a high level. There's only a few other seasons that anybody has ever done that before. People were tuned into how many points I was going to score the next game. It was a thing. But I can't control that." -- Harden

Harden, making an August 2019 appearance on Houston hip hop station 97.9 The Box to promote his annual JH-Town Weekend charity events, readily agreed when one of the hosts declared that "politics" determined the MVP winner.

The implication seems to be that Antetokounmpo wasn't deserving of the honor, which he won by receiving 78 of the 101 first-place votes, despite a historical stat line (averages of 27.7 points, 12.5 rebounds, 5.9 assists, 1.5 blocks and 1.3 steals) to lead the Bucks to the NBA's best record.

There's a precedent for the Rockets complaining about the "narrative" determining the MVP winner when Harden finished second in the voting. It also occurred after the 2016-17 award went to Russell Westbrook in the case of the then-Oklahoma City Thunder point guard joining Oscar Robertson as the only players in NBA history to average a triple-double for the season.

Of course, that didn't prevent the Rockets from pumping up Westbrook as a recent MVP when they pulled the trigger on a blockbuster trade to acquire him last summer.

It's not clear why exactly the narrative would have shifted to favor Harden in 2018-19, when he won the MVP in a landslide, getting 86 of 101 first-place votes. It's also hard to build a case that the ballot is biased against Harden when he has received more points in MVP voting over the past five years than anyone.

But Harden doubled down in an interview with GQ weeks after his radio appearance when asked if a narrative had been already formed for this season's MVP race.

"Nah, it hasn't happened yet, it's too early," Harden said. "Wait until the preseason and when the regular season starts up again. But they [the media] for sure got some teams they locked in on. We all know. That's just what it is.

"You can't tell me that a guy whose team was a 14-seed at one point last year, and ended up a 4-seed with everything that was going on -- so many injuries -- and who went on a 32-game 30-point streak, eight 50-point games, two 60-point games in one season ... and all the talk was about [Antetokounmpo]?


This was Harden's explanation for why he struggled in a season-opening home loss to the Bucks, finishing with 19 points on 2-of-13 shooting.

Harden consistently declines to credit the opposing defense for causing him problems after an off night, never wavering in his confidence that he can create his shot regardless of the defenders or schemes that he encounters.

But it'd be understandable if Antetokounmpo -- rarely if ever the primary defender on Harden but a dominant force in a help role -- and the Bucks believed that their No. 1-ranked defense was due some credit. After all, they held Harden to 23 points on 26 field goal attempts in their previous meeting, a convincing win by the Bucks in late March that might have influenced some MVP ballots.

"I want somebody that's going to pass the ball." --Antetokounmpo

Credit TNT's Charles Barkley for the assist in provoking Antetokounmpo into blurting a headline-making explanation for passing on Harden when picking his All-Star team.

"What, you don't want The Dribbler?" Barkley asked, interrupting when Antetokounmpo said he was deciding between Trae Young and Kemba Walker when Harden was the only other starter available, prompting a chuckle from fellow captain, Los Angeles Lakers superstar LeBron James.

Antetokounmpo chose Walker, a selection that didn't quite match his stated criteria. Harden averages 2.5 more assists per game than Walker this season. Walker's career-best assists average was 6.1 per game in 2013-14, and Harden has averaged at least that many dimes in the past seven seasons, including when he won the assists title with 11.2 per game in 2016-17.

Antetokounmpo, for what it's worth, has never averaged at least six assists in a season.

"Offensively, we were just trying to find whoever James Harden was guarding. That's who we thought we'd have the opportunity to score on." --Antetokounmpo

Unlike during the All-Star Game draft, nobody provoked this swipe at Harden. It was Antetokoumpo's answer to a bland question about his team's approach down the stretch of the All-Star Game.

That swipe wasn't exactly supported by the facts. Team Giannis, which had more turnovers (seven) than field goals (5-of-19) in the fourth quarter while blowing a nine-point lead, attempted only two shots in the frame in which Harden was the primary defender. Neither of those shots was good.

Not that simply targeting Harden on defense is a sound strategy. There's a narrative that Harden is a notoriously poor defender, but the numbers don't back that up.

Harden has established himself as an elite post defender. According to NBA Advanced Stats, Harden ranks in the 90th percentile this season by giving up only 0.65 points per post-up despite being the league's most targeted player in those situations (107 possessions). He has graded as an average isolation defender this season, ranking in the 50th percentile by giving up 0.89 points per possession.

"I wish I could just be 7 feet and run and just dunk. Like, that takes no skill at all. I've got to actually learn how to play basketball and have skill, you know? I'll take that any day." -- Harden

This was the meat of Harden's response to Antetokounmpo's punchline about his passing when ESPN's Rachel Nichols broached the subject during a 1-on-1 interview at All-Star Weekend.

However, just as Antetokounmpo was off target with his disses of Harden's game, it's hard to claim this criticism by Harden is based in reality. It's rare to find a near-7-footer with such top-level athleticism, though there have been several who have played in the NBA.

Has there ever been a player that size who created most of his own dunks off the dribble?

"There hasn't been a back and forth. I'm not that type of guy. I've never tried to take stabs at somebody. Maybe sometimes it might come out like that, but I'm definitely not. ... If that's what [Harden] believes, that's what he believes." --Antetokounmpo

Perhaps Antetokounmpo's skill set includes acting, because these comments in a late February interview with ESPN prove he can certainly play coy.

These came in the wake of Antetokounmpo taking stabs at two subjects that are sensitive to Harden: the perception that the Rockets star is a ball hog and that he's a dreadful defender. Did Antetokounmpo really expect anyone to believe those were accidental?

"I've got to go with James Harden." --Antetokounmpo

Antetokounmpo paused for several seconds when asked during an Instagram Live Q&A in late March which NBA player was most difficult to guard. After carefully considering it, he replied with the player who is en route to his third consecutive NBA scoring title.

Maybe this virtual olive branch ends the back-and-forth beef between the league's last two MVPs. Or maybe the Bucks and Rockets' next meeting could ignite another round inside the bubble. 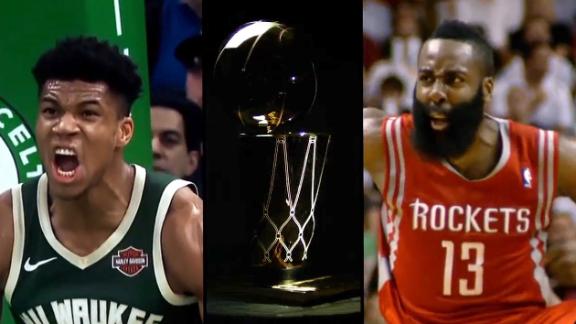 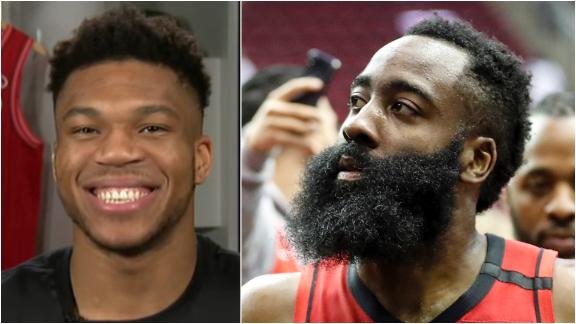 Giannis trolls Harden: 'I want somebody who's gonna pass the ball!'
Giannis Antetokounmpo is torn between choosing Kemba Walker or Trae Young, and when Charles Barkley jokingly suggests James Harden, Giannis deals a fun jab during the NBA All-Star draft. 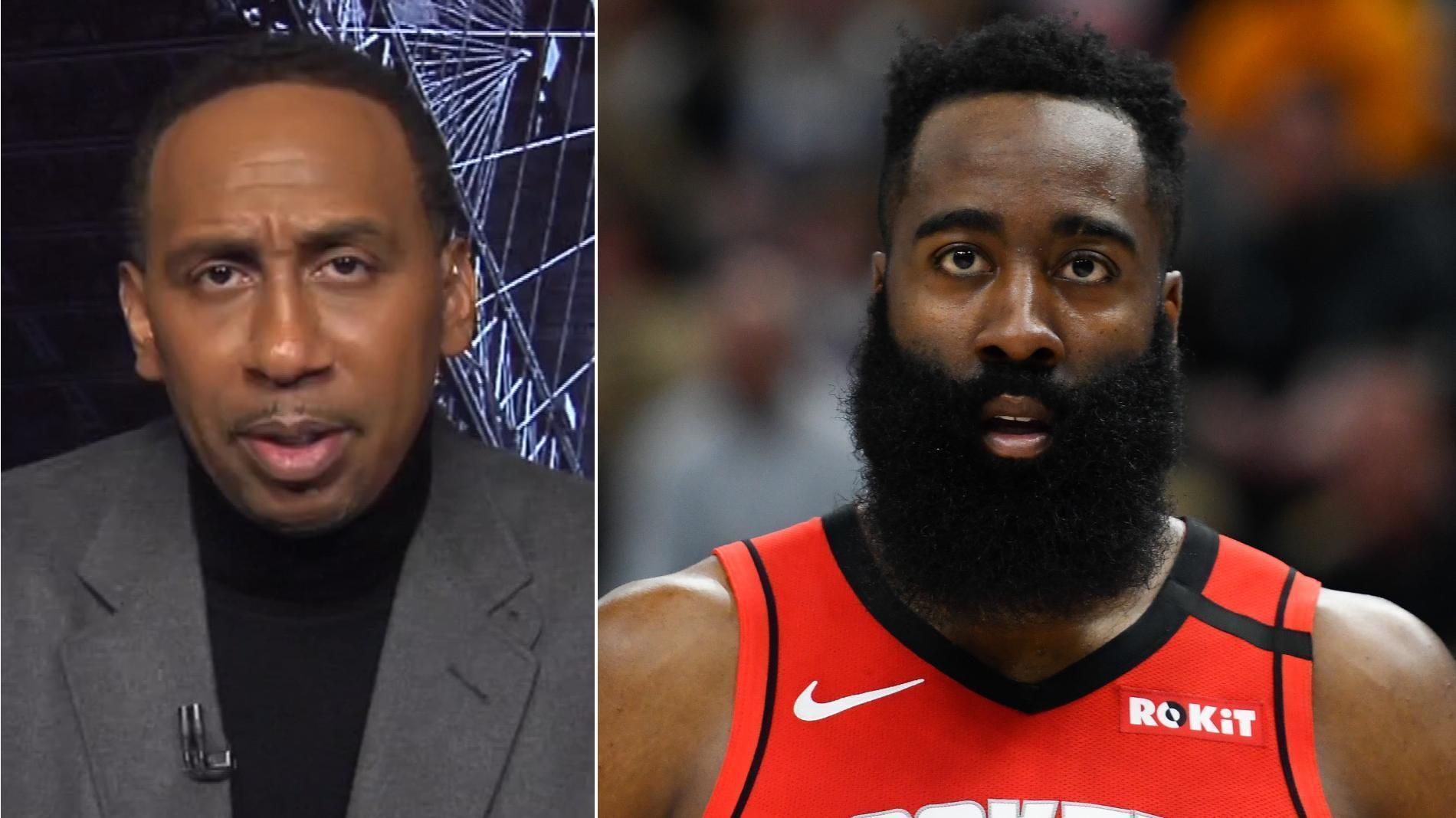 Harden has words for Giannis ... but were they justified?
Stephen A. Smith agrees with James Harden's response to Giannis Antetokounmpo saying he wanted to draft a player who passes the ball. 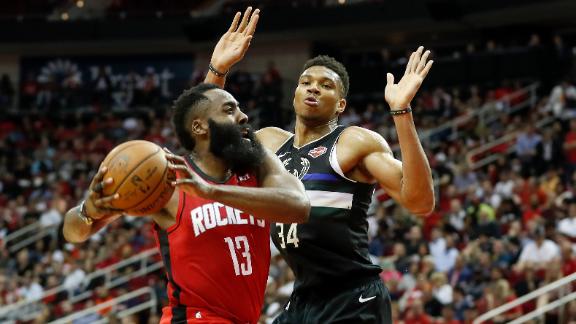