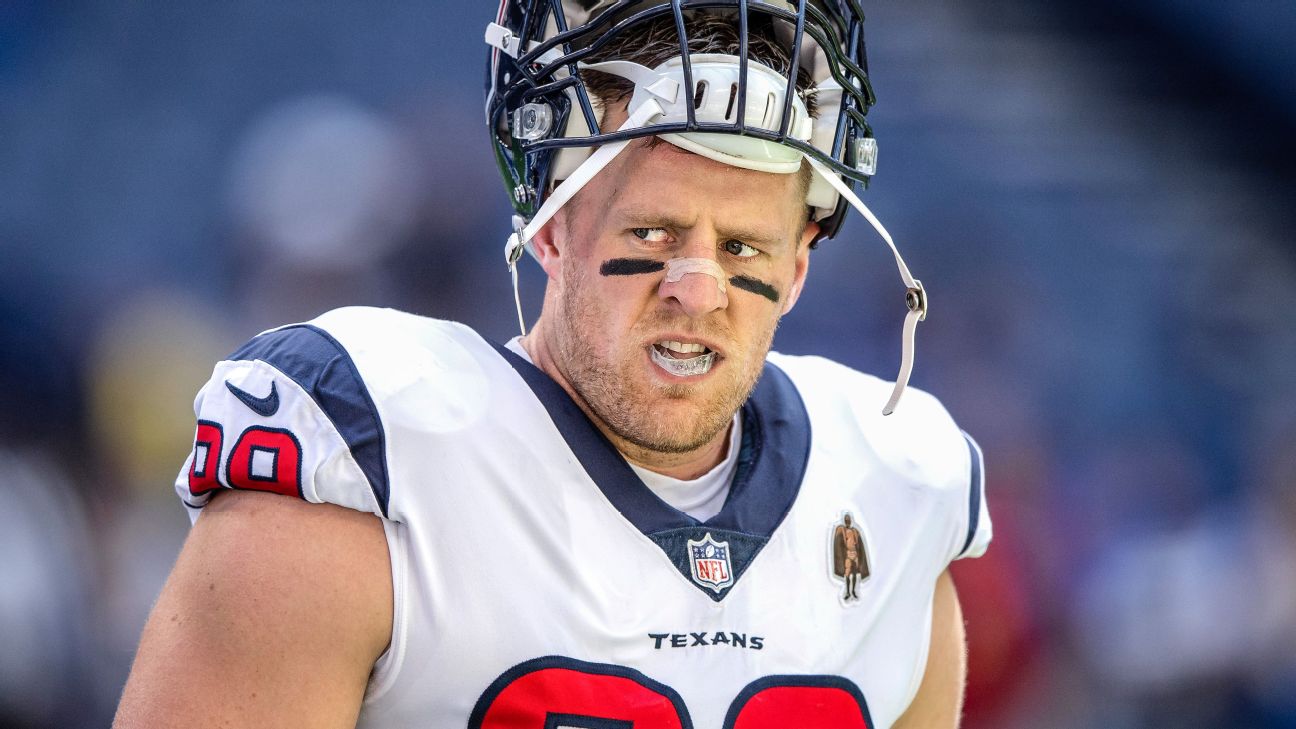 HOUSTON -- Like many people this spring and summer, J.J. Watt has had a lot of downtime while quarantining during the COVID-19 outbreak.

But unlike a lot of people, Watt says his "body feels as good as it has felt since probably 2014 or '15 because "the quarantine situation has given me literally nothing to do but work out every day."


"I mean, there's nothing else you can do," Watt said. "You can't go out, you can't go to the movies, you can't go to eat. So the workout program for me this offseason has been awesome because I've had a full offseason to do my workouts exactly how I needed to do them. I've been able to focus on my nutrition every single day. I've counted every single calorie the whole way. Basically tried to fully transform my body from the beginning of the offseason until now.

"It truly has been one of the best offseasons from a workout standpoint that I've ever had, and I'm very, very pleased about it. My body feels as good as it has felt since probably 2014, 2015, somewhere around there. So I'm really looking forward to getting into camp and just getting to work."

Watt won his second and third NFL Defensive Player of the Year awards in the 2014 and '15 seasons.

But while the Texans star knows he was fortunate to have the proper equipment and space to work out while quarantining, he also acknowledged that many NFL players did not have that opportunity. Unlike Watt's rookie year when players could still work out in local gyms and with each other during the 2011 lockout, they couldn't get into their team facility this season.

"[In 2011] we were locked out, so a lot of people will try and compare that because we couldn't be in the facility, so they try to say that that's the same as this year," Watt said. "But the difference was, in 2011, you could still train at your local gym. You could still get together in groups with other players and train and run and practice and do things. This year you couldn't do any of that. You're not supposed to go to your local gym, you're not supposed to train in groups, you're not supposed to do any of that. Some guys were living in an apartment that doesn't have a weight room or that doesn't have a place for them to run. So everybody's coming in in a very different situation this year, whereas in the past, guys have had that opportunity to work out."

Watt also said that the thought there might be an uptick in injuries, as there was in 2011, is "absolutely one of the concerns that the NFLPA has brought up and that the players have brought up as a whole."


"I think one of the most important parts of this ramp-up period and one of the reasons the preseason games got taken out was to analyze where each guy's at individually because everybody's going to be coming in and starting from a different place," Watt said. "Some guys are going to have the luxury of training full out, and they're going to be 100 percent ready to go and some guys are going to need a lot of time. So I would say that's definitely a concern and that's something that each team and each player needs to look at individually because it certainly is something that should be watched."

During his conference call Saturday morning, Watt said it was not a difficult decision whether to play or opt out this season because he is not living with anyone who is high-risk, but he said he understands not everyone is in that situation. His wife, Chicago Red Stars forward Kealia Watt, spent more than a month in a bubble in Utah for the NWSL Challenge Cup.

"Like I said earlier, any time you're in a situation where you're not in a full bubble, there is going to be that inherent risk," Watt said. "It is not going to be 100 percent guaranteed to be safe, so they're putting a lot of trust in the guys to make sure they're doing the right things and make sure they're handing themselves right outside of the building. And then you're also trusting the testing process and trusting the fact that you are playing a contact sport where you're literally rubbing up against people all game long, all practice long. So it's just a matter of understanding -- and that's why we have the opt-out. That's why we make sure everybody knows fully what the risks are going into it. Because, like I said, there is some risk. It is not 100 percent fail-proof."

Because of that, Watt said it's important for the NFL to learn from the challenges Major League Baseball has had

"It's certainly interesting to watch," Watt said. "I think watching it and trying to figure out what you can learn from it and how you can make sure you don't have a situation like that where one team has 14, 15 guys and then you're having to cancel a whole bunch of games. I think that there's no question we're watching it and trying to make sure we don't follow in that same pathway."
Report a correction or typo
Related topics:
sportsespnjj wattnewshouston texansnfl
Copyright © 2021 ESPN Internet Ventures. All rights reserved.
TOP STORIES
13 Investigates increase in game-day crime near Astros ballpark
2 charged with aggravated sexual assault of child in Montgomery Co.
34-year-old suspect wanted in teen's road rage murder
Study highlights link between COVID-19 and domestic violence cases
Less rain this weekend, more storms to come next week
DOJ sues TX over Abbott's order to pull over vehicles with migrants
Twin babies recover from respiratory syncytial virus amid pandemic
Show More
Summer travel plans may look different for those hitting the road
Disney joins list of companies requiring vaccine for nonunion workers
HISD superintendent shakes things up ahead of new school year
Houstonians weigh in on Abbott's migrant transportation order
Man accused of killing wife and shooting her 2 kids in Katy area
More TOP STORIES News