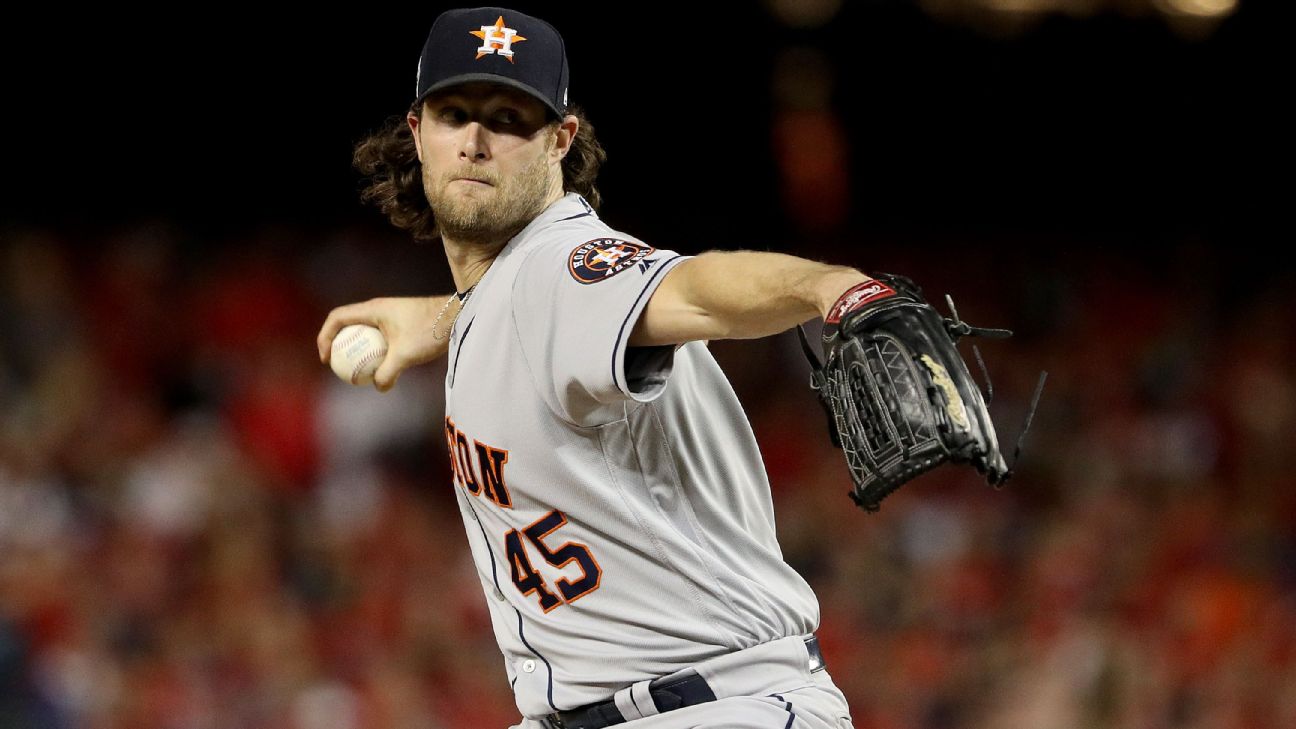 SAN DIEGO -- The Gerrit Cole sweepstakes could be nearing its end, as teams with designs on signing the star right-hander are expecting him to sign a record-setting deal before the winter meetings end Thursday morning, sources familiar with the situation told ESPN.

Bidding by the New York Yankees, Los Angeles Angels and Los Angeles Dodgers continued Tuesday as the 29-year-old weighed his options. Cole's agent, Scott Boras, said in a news briefing that a pair of so-called mystery teams are pursuing the right-hander, as well. Two sources said they believe Cole will agree to a deal Wednesday, though another cautioned negotiations could stretch into Thursday.

When completed, Cole's contract is expected to smash the record $245 million deal Stephen Strasburg received from the Washington Nationals on Monday. Cole is two years younger than Strasburg, has not suffered a significant arm injury like Strasburg has and performed better than Strasburg in 2019.

Whether Cole's deal will exceed the $300 million threshold is unclear -- and could be subject to a bidding process that began early in the meetings and was expected to include Boras shopping offers. Because of Cole's age, the involved teams understand he will warrant at least an eight-year contract, according to sources. It also almost certainly will break the average-annual-value record of Mike Trout's 10-year, $360 million contract extension last season.

An eight-year deal worth $36.1 million a year would total $288.8 million -- a number that is likely the floor for Cole discussions. The possibility of it extending well past $300 million and going perhaps nine years, executives from two teams involved in the bidding said, is real.

The fevered pursuit of Cole could potentially make him the highest-paid free agent in history. Outfielder Bryce Harper, also a Boras client, signed a 13-year, $330 million deal with the Philadelphia Phillies last year. Trout's extension with the Angels, when combined with two years remaining on his deal, totaled $426.5 million.

All three of the known teams pursuing Cole have ample reason to reach deep into their checkbooks and lavish him with a deal that will dwarf the record for pitchers coming into this winter of $217 million by David Price. The Yankees, hoping to poach Cole after a season in which he went 20-5 with a 2.50 ERA and struck out 326 for the Houston Astros, would immediately vault themselves to the best on-paper team in the American League and place Cole atop a rotation that already includes Luis Severino, Masahiro Tanaka, James Paxton and Domingo Germán.

The Angels, whose need for starting pitching is as acute as any, promised to surround Trout with elite players when he signed his deal. Cole certainly qualifies, having proven his mettle during a tremendous postseason in which the Astros lost to Washington in Game 7 of the World Series.

The Dodgers, whose resources don't quite match the Yankees' but are considered second-best in baseball, would love to place Cole atop a rotation that already includes Walker Buehler, Clayton Kershaw and a grab bag of well-above-average pitchers, Kenta Maeda,Julio Uriasand Ross Stripling, plus top rookies Dustin May and Tony Gonsolin. After back-to-back World Series losses in 2017 and 2018, Los Angeles was stunned in the deciding game of the division series by the Nationals.
Report a correction or typo
Related topics:
sportsespnnewsmlbnew york yankeeshouston astroslos angeles dodgerslos angeles angelsgerrit cole
Copyright © 2021 ESPN Internet Ventures. All rights reserved.
More Videos
From CNN Newsource affiliates
TOP STORIES

Brantley reportedly passes on joining Springer in Toronto
What it would take to reach herd immunity in Houston
Dense sea fog rolling into Houston
Houston police searching for answers in death of 5-year-old
Biden may not be allowed to bring his Peloton to White House
Show More
Pres. Biden signs executive orders on pandemic, climate, immigration
PVAMU students say Harris is shining new light on HBCUs
Legal experts weigh-in on President Biden's immigration proposal
I-10 East shutdown planned this weekend for bridge work
Here's why Harris is No. 49 while Biden is No. 46
More TOP STORIES News