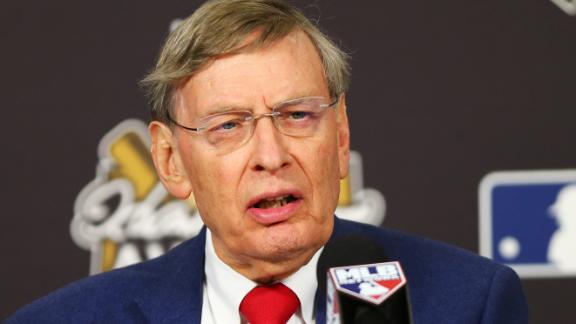 PHILADELPHIA -- Baseball commissioner Bud Selig wouldn't rule out the possibility of having someone from outside baseball succeed him next year but said Wednesday that his successor has to be someone who understands "the culture" of baseball.

Selig, whose contract will expire in January, formed a committee of owners this month to serve as a selection committee to find the next commissioner.

Baseball's chief operating officer, Rob Manfred, is viewed as the favorite. But other names, including Disney chairman and CEO Bob Iger, have begun to surface in media reports.

Disney is the primary owner of ESPN.

Although Selig wouldn't address any specific names, he said bringing in a candidate from the outside would entail certain difficulties.

"That's a judgment call," Selig said on a visit to Citizens Bank Park as part of his farewell tour of all 30 ballparks. "I know there's been a lot of speculation in some stories. But that's a judgment call this group will have to make. Understanding the culture of the sport is very important. There's no question about that.

"I remember, way back in 1992 when I took over, there was a lot of criticism -- searing criticism -- that, 'Oh, how can you let an owner be the commissioner,' and so on and so forth, that was just wrong. But as far as training goes, look, there was nothing that came before me that I hadn't already seen in the previous 25 years of running the Brewers. And I think that experience helped.

"But on the other hand, as I sit here, this has to be an inclusive process. Everything and everybody should be considered. And people will have to make their own judgments on whether or not you want to stay inside baseball. ... But it's true, not only in baseball but in all sports. Understanding the culture is important -- very important."

Selig conceded that the definition of a candidate from "inside" baseball didn't necessarily have to include only people now employed by the sport.

"That could be people who do business with baseball or have a lot of knowledge of that," he said. "And that's just a judgment call that they'll have to make at some point."

Selig deflected recent comments by Chicago White Sox chairman Jerry Reinsdorf that the commissioner shouldn't play a role in the selection of the next commissioner, saying he preferred not to comment. But Selig did describe Reinsdorf's statement last week that he "would expect the commissioner is going to play whatever role he would like in the process" as "a fair assessment."

"I meant what I said before," Selig said. "I know there have been some stories and things. But I try not to overreact. [Committee chairman] Bill DeWitt and I have talked about it. The committee is moving ahead, with the approval of ownership. And I have confidence in their ability to get this done."

Selig said all teams would be invited to submit names of potential candidates, but he has urged clubs and the selection committee to avoid talking publicly about any candidate, because if they want to wind up with the best candidate, "you'd better do it quietly and sensitively."

Asked whether there was a time frame for when he would like to see his successor named, the commissioner said: "I don't know if there is an ideal time. I have until next Jan. 25, and today is May 28, so there's a lot of time."

He said he hopes the process will be completed "in a reasonable amount of time. But if you ask what that is, I'm not sure I know."